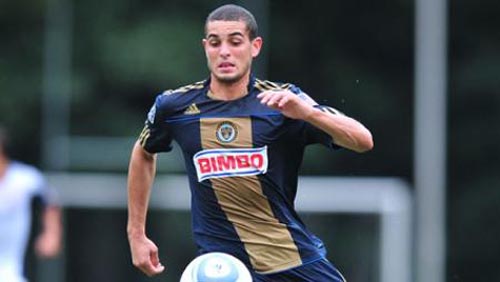 Swarthmore alum Morgan Langley ’11 has signed a contract with the MLS’ Philadelphia Union, the team announced on Thursday afternoon.

Langley’s signing comes after a successful season at the Union’s USL-Pro affiliate Harrisburg City Islanders. The former Swarthmore star helped lead the City Islanders to the USL PRO Championship Match, where they lost to host Orlando City 3-2 after two rounds of penalty kicks. Langley helped spark Harrisburg’s playoff run by scoring the playoff-clinching goal against Dayton in stoppage time on July 27th. For the season, Langley scored two goals and earned 10 starts for the City Islanders.

A 2011 graduate of Swarthmore, Langley reached several milestones during his Garnet career, finishing as program’s all-time leader in career points (95) and assists (27). Langley wrapped up his Garnet career with one of the best offensive seasons in program history, leading the team with 14 goals, 14 assists and a program single-season record 42 points while finishing in the top 10 nationally in assists, assists per game and points per game. For his efforts during the 2010 season, he was named the 2010 Centennial Conference Player of the Year, received two All-American honors (NSCAA Third Team/D3Soccer.com First Team), and was named to the NSCAA All-Region First Team and ECAC Division III South Region First Team.

With the help of Langley, the Garnet captured the 2010 Centennial Conference Championship, reached the second round of the NCAA Championships and achieved the first No. 1 national ranking in program history.

By signing with the Union, Langley becomes the first Swarthmore alum to play in the American top-level professional baseball (MLB), football (NFL), basketball (NBA) or soccer (MLS) league since Dick Hall ’53 wrapped up his 19-year major league baseball career with the Baltimore Orioles in 1971. In fact, Langley is the first ever Centennial Conference alum to reach the MLS, NFL, NBA or Major League Baseball.

Langley will try to help the Union with its late-season push for a playoff spot. Philadelphia (8-7-12) is currently tied for third-place in the MLS’ Eastern Conference.

The Union’s next match is scheduled for this Saturday at 7:30  against first-place Columbus.

Reprinted from September 15th with permission from the Swarthmore Athletics website, here.

Read a past Gazette interview with Langley here.