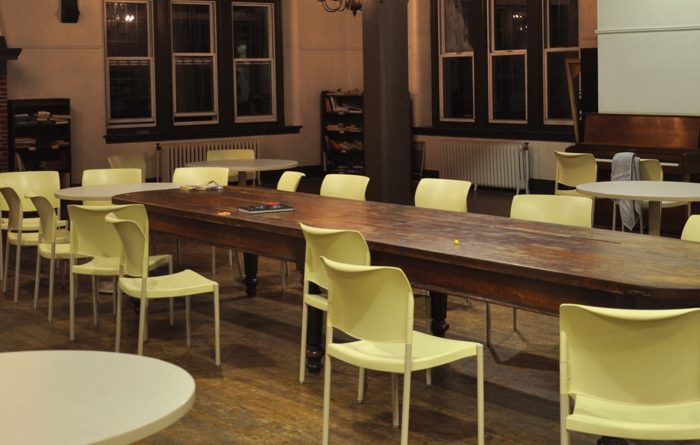 Mary Lyon is a dorm many Swatties may not have been to this week, or this month or this year. Some may never have been to ML. Yet, there are many others who have continued to request rooms in ML year after year, who think of the dorm as one of the best parts of their Swarthmore experience.

“This dorm is probably the best thing that happened to me at Swarthmore,” Mariah Parker ’13 said. Parker is a Student Academic Mentor (a.k.a SAM) in ML. She moved to ML as a first-year, after spending her first six weeks living in Willets, and found that the experience was formative to her new life in college. “Suddenly I fit in and I had friends,” Parker recalled.

In terms of its physical characteristics, Mary Lyon has a spacious social lounge, a breakfast room that’s open every Saturday and Sunday, large rooms (some with private bathrooms), as well as an attractive façade. “Students always say — so do staff — that if ML were on campus it would probably be the most popular dorm,” Rachel Head, Assistant Dean of Residential Life, said.

Many who live there do so because of the social life that it has. “It’s more of a dorm life than a hall life, and it’s a very social dorm life,” Parker said.

Ariana Spiegal ’13, RA on ML 1st, has similarly found that ML has vibrant dorm life. “There are always people in the [first floor] lounge. I go to the breakfast room on Saturdays and it’s always full of people … that’s a lot different [from other dorms],” she said.

Spiegel is living in Mary Lyon for the first time this year, and has found the experience unique compared to her experiences in Willets and Wharton.

“Everyone’s really friendly and really tight knit. And it’s not just my hall but the whole dorm, which is a lot different than any dorm I’ve lived in so far,” Spiegel said.

But, despite the many at Swarthmore who state positive experiences of their time living in ML, others harbor less-than-ideal perceptions of the residence hall.

Hillary Hamilton ‘12 was an RA in Mary Lyon last year, and noticed some of these stereotypes. “There are a lot of ideas on campus of what it means to live in ML, in the way you are isolated and the way that there are certain ‘ML kids’,” Hamilton said.

A few of the common stereotypes associated with the so-called “ML people” may include habitual partaking in video games, social awkwardness or even full-blown self-seclusion. “ML tends to have a stereotype of either the engineers who don’t want to talk to anybody or the computer geeks who don’t hang out with anybody … but I think if you look around campus you find those people,” second floor RA David Opoku ’12 said.

Those who live there generally find these stereotypes only half true.
“There are people who are not the most social, who would like to live alone but would like to hang out with people when they want to,” Alex Lee ’12, another SAM in ML said. According to Parker, those who chose to live less social lives do not make the dorm a less social place. ML residents can choose for themselves how social they want to be.

“The general rule with ML is that if you want to see people you can. But you’re not forced to see people, so it’s a nice balance,” Parker said. According to her, there are residents in ML willing to hang out anytime during the day (or night).

As for the idea that ML residents are bigger gamers than those in other dorms, Spiegel pointed out that that idea may come from the brevity of the experiences of many Swarthmore students in ML. “As opposed to other dorms where you don’t have a video gaming system or a television right when you walk in … that’s probably the first thing you see when you come into ML,” she said.
Another common feeling among Swarthmore students is that Mary Lyon is just too far away from campus to travel to, let alone live in. “People seem to believe that the distance is the major concern,” Parker said. Many people believe the distance is a burden on ML residents, but those who live there say it is totally manageable.

Some even find that the distance of ML attracts them to the dorm. “It’s a way for you to get away from all the stress on campus but still also have access to everything,” Opoku said. Dean Head has even received several emails from students, who appreciated the time the walk to and from campus gave them to think.

“Part of ML culture kind of necessitates it being off campus. Being further away makes it easier to form a community bond with the people who are around you,” Lee added.
For those who don’t have these experiences, however, ML can appear to be an undesirable place to live.

Often, it is the returning ML residents who are able to relieve these fears, especially in first year students. Residents who are returning for their third or fourth year in ML help the RAs in getting students excited for their new dorm. “It’s not hard to get freshmen excited about living in Mertz or Wharton because there are all these seniors who wanted to be there … but when you have that in ML too that’s really exciting,” Hamilton said.

Ultimately, those who love to live in ML hope that some of these misconceptions about Mary Lyon can be overcome by exposing more of the student body to the dorm. “One thing that we try to do a lot is do things that entice people to come down … so we tried to advertise the breakfast in the weekend events or on posters around campus and things like that,” Hamilton said.

Additionally, the administration is attempting to invent new events to take place at the “perimeter dorms”, such as ML and the PPR residence halls. “I don’t know if we have an answer of how to [dispel these misconceptions] other than to try to come up with events,” Head said.

Rooms in Mary Lyon became markedly more popular in last year’s housing lottery, and ML breakfast has been well attended so far this year, making it appear that the dorm is becoming better known. Residents there are optimistic that that these trends will continue, and that students will find even more reason to come to ML.

“Most people coming to Swat are really open minded … they’ll figure out for themselves what things about ML, whether positive or negative, are right,” Lee said.