Campus Journal » I Went to Every Free Food Event at Swarthmore College for Two Weeks. Here’s What Happened. 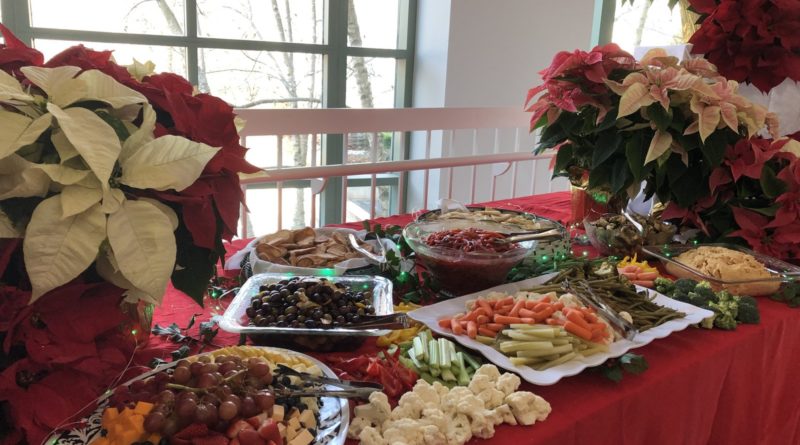 During the first two weeks of this school year I attended every event on campus that was advertised to have food that I possibly could attend. This took an insane amount of time management skills, and oddly enough I did better at keeping up with my work and self care during this journey than after I finally let myself stop attending different campus functions. I have no idea what I was thinking, honestly. Looking at my Google Calendar in front of me I saw almost no white space in between various color-coded events. Despite how terrifying the sheer amount of events looked, with an iron will I attended about fifteen events in the first two weeks of classes.

At first I took extensive notes of these events including what food was offered, who was hosting the event, what was touched on, who showed up, and what the event was all about. Honestly, this got extremely boring, so I stopped. It took so much joy out of the experience of popping into every corner of campus in pursuit of whatever pizza or cheese platter I could find. It wasn’t fun to make the pursuit for food scientific. What was fun was going to the events, telling people I was there for food, and chatting for a few minutes, but sometimes I felt bad and stayed for longer than I initially intended. For example, I went to Jellow’s first Alcohol and Other Drugs program where only three other people showed up so I felt like I needed to stay the whole time, but I did bring home a full box of ice cream bars while also reflecting on my conversation with Jellow to the point of an existential crisis. But hey! The ice cream bars lasted my roommates and me until this week!

I also stayed for the whole Israel/Palestine film, The Wanted 18, which was not just because of how disrespectful it would have felt to get up and leave in the middle of the film, but because I was genuinely interested. The other event I stayed the whole time for was a math colloquium with Professor Pamela Harris from Williams College. This presentation had a very nice fruit bowl and also very nice extra credit for my math class for showing up. While signing the sheet for extra credit it made me realize that this is how they get people to come to these things.

Food, extra credit, and fun activities were all methods I saw RPLs, staff, and faculty use to bring students in and engage them in various ways. I realized that before forcing myself to go to every event, I really didn’t attend anything that wasn’t required for class or that wasn’t in my dorm or on my way to whatever else I wanted to do. Even if I saw something in one of the daily Reserved Students Digest emails or something on the dash that I was interested in, it wouldn’t give me the motivation to go. Not until I started one of the most useless experiments ever did I finally go to an event on campus that I didn’t need to, but I honestly don’t regret breaking the cycle, because after a few days of the experiment I met various groups of people that I might have never met if I didn’t attend a specific event. It lead me to the realization that each of these events catered to very specific groups of people.

Each event had a very different vibe and at times it made me realize that I was not the kind of person that was meant to attend the event. In a lot of cases an event was definitely catered towards freshmen or the dorm communities that it was hosted in. The first Saturday I went to five different events, four of which were hosted by RAs. These RPLs were most likely required to host an event but were all honestly very enthusiastic that I was willing to show up to their community building movie night, game night, etc.

Maybe I’m just a masochist, but of all the events my favorite was the PPR courtyard barbecue because there are few times in my life that I had ever felt more uncomfortable. I anxiously waited for a black bean burger with my roommate and we ran off as soon as we got one. Despite knowing quite a few people that attended the barbecue, none of them were people that I really talk to and because many of them were upperclassmen who already knew people at the event; this was unlike the freshmen at other events I attended that were trying to make friends every minute. The PPR barbecue definitely made me feel angsty, but so did many other events where I knew none of the people surrounding me. At some of the other events, I was achingly uncomfortable and would take food and dash, but in this case I was waiting for the burger to be cooked while literally hiding behind a trash can.

There were other times when I had to engage in awkward conversation with hosts of the events. Whenever they asked what brought me I honestly just admitted that I was there for food and I planned on attending as many food events as possible. Some of the food was good or even replaced meals I would have had at Sharples, but in some cases there were just sweets, which I definitely had too much of during the two weeks of events I went to. It was extremely hit-or-miss on food and my comfort level, but at least at every event there were always vegetarian options.

After this experiment, I didn’t go to anything for a week. I was completely overwhelmed by cheap snacks and popcorn. I thought I wouldn’t need to eat Sharples with the sheer amount of programming I was attending, but I couldn’t live off carrots and ranch. I have no regrets, but I certainly wouldn’t do it again. Snacks and refreshments definitely don’t replace meals.

One thought on “I Went to Every Free Food Event at Swarthmore College for Two Weeks. Here’s What Happened.”