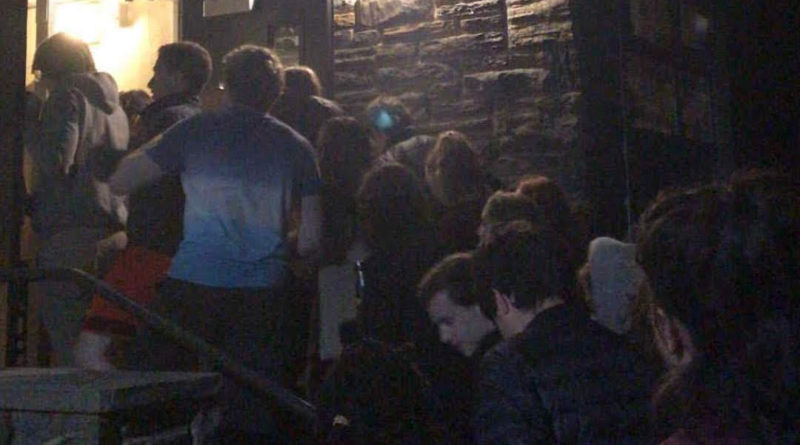 We’re go-getters here at Swarthmore. It’s how we got here in the first place, and it’s how we make it through. When we want good grades, we work for them. When we want summer internships, we pursue them. When we want to toast two stale slices of bread on the stovetop of the Willets basement kitchen at 12:10 a.m. on a Tuesday night / Wednesday morning, we do that. Even when we maybe shouldn’t have.

I had saved some guacamole from the Crumb Cafe the night before. It was brown on top and completely unappetizing. Holding the damp tub in my hand, I felt like it shouldn’t go to waste. Fellow students put hard work into making it. Of course I could have composted it, leaving a tasty treat for the G.A.s to discover during the weekly compost sorting. Instead I reached into the very farthest corner of the Willets 1st fridge, a place unfit for even most microbial habitation, and pulled out a plastic bag containing just the two butt ends of the loaf. Since the day they were rejected by their original owner in favor of the softer inner slices, they had been waiting for some salvation, a meaningful ending to justify their useless existence.

There is no toaster in the Willets basement kitchen, but I was not about to let such a simple impediment stop me. My ancestors befriended, nurtured, and tamed fire. They bent the flames to their will and rode them to become the dominant species on this planet. They forged tools, burned divine offerings, and built civilization. If they did this, I could certainly make two pieces of toast on an open burner flame.

Like a captain turning the wheel at the helm of his ship, I steered the dial towards the highest possible setting. I wanted the fire to do my bidding in that very instant. I also wanted to go to the bathroom.

My initial fervor had mostly fizzled by the time I left the bathroom and remembered I ought to check on the toast. Walking down to the basement I noticed that the beloved usual Willets basement aroma had been replaced with a faint hint of smoke.

I was firmly rooted in denial, even as the cloud of smoke rushed towards my face as I opened the kitchen door. It took only a few seconds for the flaming toast and the spiraling smoke to quickly whisk me past the next three stages of grief, landing me squarely and securely at acceptance.

I knew the alarm would go off any second. In a desperate attempt to avoid my fate, I considerately held the door open on behalf of the smoke, so that if its will compelled it to do so, it would exit the room and perhaps end this saga before it would begin. Yet I could do nothing about it, nothing but stand dumb amidst the smoke and wait for the inevitable. This was my last supper, and the one entrée on the menu was burnt toast and oxidized guacamole.

Flashing lights and wailing alarms pierced the dense cloud of smoke that had gathered above my head. Standing outside the kitchen, I watched 30 dazed, confused, and angry residents of Willets basement file out of the hall in their pajamas and flip flops, coats hastily thrown around their bodies, not even having had enough time to slip their arms into the sleeves.

“It definitely wasn’t me,” I said hoarsely, knowing that the tone of my voice and my frantic disposition betrayed the truth. Despite this, I hoped that the image of my complete pathetic desperation would somehow be comedic enough to lighten up the mood. It did not, in fact, lighten up the mood.

The lights and the alarm were nothing compared to the pulsing glares that emanated from the eyes of the basement residents as they walked by me in single file. Those expressions of pure disdain will stay with me long after the smell of smoke will have faded from my hair and my skin.

I felt compelled to do something. Not to be heroic, of course. I was not exactly in the ideal position to fulfill that role. As the basement folks huddled outside in the cold, I stood at the door thinking I might compel the smoke to leave. This could be my selfless redemptive act, I thought, to stand in broad view of them, to face their ire head on and persevere through it with the singular goal of saving the building from destruction by fire. I would suffer for them, and win back what little admiration they might have had for me before.

But Willets was in no danger, and even if it was then my holding the door open would not have helped. Instead I stood beside 30 students, desperately trying to put on a calm and collected expression. In attempt to at least appear useful I called Public Safety.

“Yeah, we know that there’s a fire alarm in Willets,” said the officer on the receiving end of my call. “We can hear it.”

Over the next five minutes I subsequently called Public Safety a total of three more times.

“Are you on your way?” I asked, my vocal chords barely able to formulate human speech due to the inhuman frequency in which they vibrated.

“Yes. We know where Willets is,” the officer responded in understandable annoyance.

I was euphoric when the Pub Safe officer appeared and walked right past me to turn off the alarm in the control room. The allure of salvation drew me into the room with him.

“It was me!” I exclaimed. “I did it! I started the fire.” Before he had a chance to respond, I continued. “It was an accident, but I take full responsibility and I completely understand the gravity of my actions,” I said, presenting my wrists to the officer.

I wanted to be taken to the secret dungeon below the Pub Safe house. I wanted to be chained up, locked in. I wanted to be paraded up McGill Walk, my head adorned with a crown of thorns, carrying the cross that is to be my ultimate fate and my final resting place on the roof of Parrish.

I gave myself in to the Pub Safe officer, confessed to him my crimes. This was to be the ultimate act of redemption, of grace in the face of adversity, in which the abhorrent criminal confesses to his crime and throws himself into the arms of the law, the arms of his merciful Lord. This is the moment that gives meaning to the crime, that puts it in the context of a narrative arc, a redemptive narrative, a progression, a journey of becoming.

But there was no redemption, no mercy, no grace. Because there was no crime. Just a stupid, careless, pointless mistake.

“What’re you doing here?” Croaked the officer. “You’re not supposed to be here,” he said. I faced reprimand not for starting the fire, but for intruding into the room. And even so those meager verbal consequences were not nearly enough to satiate me.

The alarm having been turned off, the residents of Willets dragged themselves back to bed. Lost, I stumbled into the dark decrepit Willets laundry room. I found myself sitting behind a washing machine with my knees bent to my face. If I stayed still for long enough, I hoped, the rats might eat me alive. At least then I would have been productive, I would have lived a meaningful life, providing sustenance to these unsung residents of Willets basement that must otherwise subsist on a diet of Tide Pods and leftover MMK snacks. Nestled into a narrow crevice between the washing machine and the wall, I found safety and intimacy in my place of reclusion. A comforting blanket of dust and lint covered my body. The gentle hum of the washing machine rocked me back and forth, like a baby nestled in its mother’s bosom. I wanted nothing more than to crawl back into my mother’s womb, to escape the cruel torment and reprisal that I would surely be faced with for the rest of my life.

If this had actually been a deliberate act and not just a stupid accident, I thought, I could have at least been proud of it. If I had in fact come to the decision that Willets had to be burned down, and I was to be the one to do it, then I would have at least been satisfied with this failed but nevertheless passable attempt at achieving my goal. If this were a sociological experiment, or a prank, or a demonstration meant to draw attention to a certain political issue, I would have felt good in the aftermath. There would have been intentionality, and with it a sense of dignity.

If only the story had been just slightly different, of a passionate Willets baker, an artisan who fueled by uncontrollable creative fervor was compelled to pursue his craft at any cost. Even this slight embellishment, perhaps just a white lie, would transform this incident from shameful to a point of pride. But these were all pipe dreams, just fantasies I absorbed myself in as I rocked my body gently to the rhythm of the washing machine I cowered behind for hours after this traumatic act.

My friends Anatole Shukla ’22 and Powell Sheagren ’22 eventually breached my cocoon of self-imposed isolation. Even with their kind words of support, I couldn’t bear to look them in the eye. The world was over, and I would not be leaving the Willets laundry room any time in the foreseeable future.

Eventually I somehow fell asleep, and was only awoken when my S.A.M. Tobin Feldman-Fitzthum ’19 dropped a shirt on the body behind the washing machine to see if it was awake.

“It’ll make one banger of a story,” he said. And with a supportive hug escorted me upstairs to bed.

And so it did. I shared it with my math professor, Rebecca Black ’08, who was appreciative and empathetic. I shared it with the driver of the Uber I took to get off campus after this whole ordeal, who said it was “the best story [he] [had] ever heard from a customer.” I shared it with every Willets resident I encountered, those same people I cowered in fear from just a few days before. I now have the pleasure of sharing it with you. My deepest source of shame, my worst-kept best-kept secret, my lowest point and my highest point, is your story now.