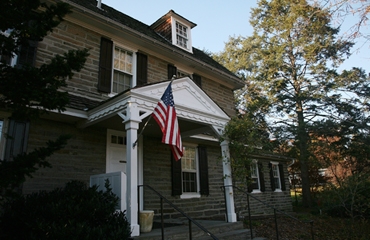 It is with a grave urgency that I write to you today; for within the past 48 hours, I have all but uncovered a plot so fiendish in its complexity, so depraved in its audacity, so ingenious in its subtlety that it threatens to undermine the very fabric upon which our proud Quaker institution balances oh so precariously.

And the source of this villainy you ask? That is where the blade that caresses our collective throat sinks deepest, my friends, for it is none other than Swarthmore’s own private policing force; those who supposedly take it upon themselves to keep our public safe…

The organization in question is, of course, Public Safety! I myself was not in the least bit surprised to discover that my old enemies were up to their dirty tricks yet again. Indeed, my more loyal readers will recall that I have spent years trying to unravel the web of corruption and deceit that lies like a cantankerous cankerworm at the heart of Pubsafe. I thought I finally had them backed into a corner when the Sharples tea tank scandal unfolded, but alas, they managed to worm their way out of my grip. Then yet again when the Mystery of the Mislabeled hazelnut bush came into the public light, they proved slippery, cleverly evading all suspicion of guilt.

But this time, I’ve got those sons of b**ches.

It all started, you see, on a seemingly innocuous Monday afternoon. I had just completed my regular bug sweep of the men’s restroom at Sharples and was returning to my seat when I noticed from a distance that something was off. A closer inspection revealed the horrible truth. My beloved Macbook pro with 15.4” LC display and 16GB memory had vanished, and in its place, this nefarious note…

the personal computer that was here

is now in the care of Public Safety.

If you are its owner please come to the Public Safety

if you have any questions.

I knew then and there that I had become the unwitting victim of some horrifying conspiracy.

Naturally, to comply with the issued instructions would have been an exercise in idiocy; playing right into the hands of an amoral bureaucracy. Instead, I began gathering as much intel as I possibly could. I soon found a lead…

“Oh yeah, that’s the new policy”, Peem Lerdputtipongporn ’21 told me over drinks at le Bernadin. “I can understand why there would be need for a policy like that, to like minimize theft and such, but then it becomes a problem because not many people know about it…”

A secret conspiracy! The situation grew more dire by the second.

Sadly, even with this new development, I still didn’t have a solid case. Director Michael Hill had declined to comment once he realized it was me asking and time was running out for my poor Macbook pro with 15.4” LC display and 16 GB memory. I needed an ace up my sleeve. To this end, I conferred with my editor-in-chief and soon it was decided that I would need to go under deep cover.

One forged passport and two online courses later, ex-mall cop, art connoisseur, and all-around pretty dope guy, Stanford Ipkiss emerged. However, due to a rather unfortunate choice in the implementation of my disguise, he would ultimately be referred to primarily as “Stalin-stache Stan”.

A rigorous two weeks of officer orientation followed, and afterwards I was introduced to my Liaison, Officer Bud, who was tasked with showing me the ropes.

“Don’t sweat it too much, Stache”, Bud told me as we went about fishing freshmen out of the bottom of booze barrels at Paces, “The hours may not be great but the work is super-rewarding and the community here is second to none. Just a heads up though, it’ll probably be a lot quieter around here than you were used to back in, uhh…”

“Yeah, it’s a pretty rough scene down there.”

“You ever been to a mall in the south side of Minnesota, Bud?”

Bud started me out small-scale: leaving feed out for the squirrels, helping absent-minded professors find their children–that sort of thing. However, with my natural skills as an investigator, it wasn’t long before I gradually began to ascend the ladder of responsibility. My duties as an officer continued to grow in number and importance until, one day, Officer Bud drew me aside.

That was the day I was given privileged access to the evidence board. It was a glory to behold. The Rose Garden Fiasco, The Caper of the Missing President, the Dean Jim DeBockle; interweaving threads of all of Swarthmore’s greatest unsolved mysteries (and a few not so great ones. I don’t think they ever did find out it was me who’d been stealing all those stop signs) were splayed out before me in wonderful tribute to the merit of small town detective work. The heart of investigative journalism within me suddenly thumped in newfound kinship with my fellow officers of the law. This, quite sadly, only made what I was about to do all the more regrettable…

I couldn’t believe my luck. My Macbook pro with 15.4” LC display and 16 GB memory! Right there! Obviously, the investigation took pre-eminence above all else, but at the same time, my computer was just within arms reach, and there was no telling when another opportunity might present itself, and all my movies were on there, and…

I had just about made it to the station exit with the package stowed casually against my torso when someone from across the room yelled, “Hey you!”.

It was at this point that I made a mad dash for it.

I bolted out of the office, sprinted across the intersection, into the tunnel, and then out onto Mertz field. As I made my way towards Parrish beach, I could hear the sound of a great multitude at my heels, intermingled with what I could only assume was the baying of hounds. At one point, someone started blowing a whistle and shouting “Stop! Stop!”. To which I responded by blowing into my own whistle and yelling “Stop! Stop!” at some invisible figure ahead.

My feet were skidding to make the turn at Parrish Circle when mercy appeared to me in the form of Mr. Roberts the shuttle driver.

“How you doing, Amaechi?” he asked good-naturedly.

I had no time to ask Mr. Roberts how he could possibly have known it was me through my brilliant disguise. Instead, I relayed to him, in as many words as time would allow, the situation at hand and explained that I needed a getaway vehicle. At first, Mr. Roberts seemed reluctant.

“Oh come on, Mr. Roberts,” I urged, “They’re the establishment! You can’t just sit by and let The Man win!”

From outside of the van, it was difficult to gauge Mr. Roberts’ expression, but something definitely changed just then. As though something I’d said had awakened some latent hunger within him, some dormant rebel spirit not at all uncommon in those who choose to pursue careers in shuttle van driving.

In one fluid motion, Mr. Roberts scooped me into the van and shut the doors. What followed thereafter was easily the greatest shuttle-van public safety vehicle chase of the past five years, if not of all time! It would have been even better had we not made a wrong turn at the chicken market and winded up at a lakeside with only one barge at the ready. Going over without the van would have left us sitting ducks on the other side, but it’s added weight would allow only one of us to go over at once. I felt it was only just to explain to Mr. Roberts that the harbingers of the police state’s wrath which pursued us so would most certainly take no prisoners, but should he decide to sacrifice himself so that this story might live on, I would write one seriously kick-ass obituary.

Mr. Roberts didn’t go for it, and so, there I found myself; thrown out upon my hands and knees, tremulously awaiting whatever violent fate should befall me. In the bustle of things, my Stalin-stache had come loose and had fallen unto the square of grass between my palms. It seemed, in that moment, a very fitting metaphor for the essential tragedy of existence; the inanity of life. My contemplations were cut short, however, when Officer Bud gripped me by both shirt collars and hauled me to my feet.

“Do you know what the penalty is for impersonating a public safety officer?” he demanded.

I admitted that I didn’t.

As it turned out, the penalty for impersonating a public safety officer is one hundred hours of community service spread out over a period of two months.

“And mind you, that’s just for the first offence. I know it’s easy to take Public Safety for granted but what we do is serious work and shouldn’t be taken lightly. That said, you seem like a good kid and you’ve got a bright future ahead of you, but if you pull a stunt like this again, your ass is mine.”

The operation wasn’t a complete bust though. I did manage to successfully retrieve my Macbook before the fiends had a chance to cover their tracks, and once the scans I’m running are complete, I will have irrefutable proof that PubSafe is actively subverting our liberal democracy with an aim to someday overthrow the current administration and establish a paramilitary neo-communist regime. I must, however, apologize to my more ardent followers, as your hunger for the truth must go a little longer unsatiated as the scans may take several days. In the meantime, some of the members of my old patrol are throwing me a little farewell party, so that sounds promising. Apparently, Officer Bud does the absolute best Sean Spicer impressions…

“Yeah, we’re all really gonna miss ole’ Stalin-stache”, an old beat partner of mine said in a later interview with one of my colleagues at the DG, “He was a good officer y’know? Was always up to some weird shit in the men’s bathroom though. But y’know, we don’t like to judge people too much y’know. Some people’re just different, I guess.”