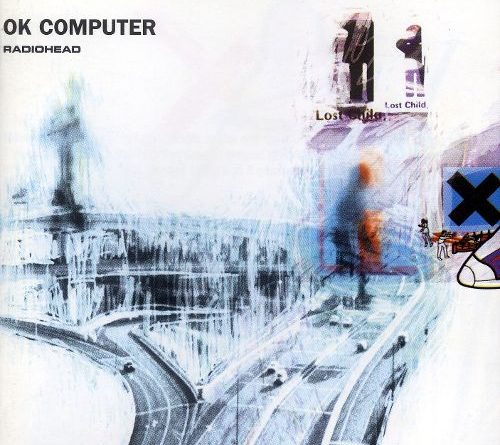 In the two decades since Radiohead’s OK Computer was first released, much has been written about it—so much so that now, as we near its twentieth anniversary, there is almost nothing left I can say that won’t, in some way, feel like a retread of what has come before. Indeed, in a world where OK Computer has left an indelible impression on almost every major rock group that emerged in its wake, one might easily miss exactly what made the original album so groundbreaking in the first place.

So with that in mind, let’s go back to the start, and begin our examination of OK Computer by considering what came before. Radiohead’s first album, Pablo Honey, was released in 1993; The Bends followed in 1995. But the group had been performing together since the mid-’80s, when most of its members were still in high school.

By the time they got a record deal, they were already jibing in a way other bands could only dream of, and they had already begun to make use of their talents in combining and deconstructing genres. On Pablo Honey, they recolonized grunge, bringing a uniquely British sense of irony and detachment to a genre far too often guilty (in its lesser manifestations) of sophomoric nihilism—Gavin Rossdale’s unintelligible whine, to cite just one example. The Bends went further, combining influences from shoegaze, folk, and classic rock into the group’s first real success.

But it was OK Computer that propelled Radiohead into the stratosphere. It was OK Computer that elevated them from a merely great band to the stuff of legends. They didn’t do this, however, by discarding what had come before, as they would later do with their increasingly concept-driven albums from Kid A onward. Indeed, for all the flourishes and genre-bending, guitars still drive most of the tracks on OK Computer. The difference, as they say, is in the details. Starting the first track, “Airbag,” with a menacing guitar riff, the band then shatters the mood by introducing a hip-hop influenced rhythm section—a single drum beat, recorded and looped. This is combined with Thom Yorke’s operatic prog-rock vocals to create a song that blew the minds of most listeners in 1997.

The following track “Paranoid Android” continues in the same vein, but experiments even more with the band’s sound. A labyrinthine collage of electronic beeps and samples serves as the background for an anxious parable of social unrest and paranoia. In short, “Paranoid Android” is practically Radiohead in a nutshell, compressed into a pseudo-suite that also serves as a declaration of purpose for the album as a whole: the future is here, but we’re not sure we like it.

“Subterranean Homesick Alien” is slightly lighter in tone. The title, of course, is a Bob Dylan reference; the lyrics pay homage to Douglas Adams (author of, among other things, The Hitchhiker’s Guide to the Galaxy) and others to whom intergalactic fantasies are objects more of derision than of devotion. It’s followed by the absolutely shattering “Exit Music (For a Film).” Originally intended for the soundtrack to Baz Luhrmann’s Romeo + Juliet, it was instead released on this album—and thank the fatesthat  it was. Reminiscent in some ways of “Street Spirit (Fade Out),” the nihilistic dirge that closed The Bends, “Exit Music” sounds like a last will and testament from someone with one foot already in the grave. “Let Down” is something of a breath of fresh air in the aftermath: a lighter track in the style of The Bends, which doesn’t deny the misery of modern life but doesn’t weaken in the face of it.

“Karma Police”, the next song, also begins with the promise of a Bends-style track, but quickly degenerates into something far stranger. It’s a puzzle-box of a song without a clear motive or core, and the music video certainly doesn’t help explain much. Appropriately, it’s followed by “Fitter Happier,” the most straightforward track on the album and the clearest expression of its main themes—as well as the driest, setting up the infectious energy of “Electioneering”, an anthem of disaffection and rage. Following that, “Climbing Up The Walls” and “No Surprises” form a tonal couplet; the latter’s almost saccharine pleasantness contrasting with the agonized wails of the former.

And the final two songs form a statement on their own. “Lucky” precedes the rest of the album by several years; it’s literally a song by Bends-era Radiohead, but it’s followed by “The Tourist”, the band’s ultimate declaration of independence from the scene that only wanted them to play “Creep” forever. As OK Computer closes, the new millennium—and the terrors that lay in store—loom ominously on the horizon; but we, having lived through those terrors (not to say we’ve moved past them) can, at least for a moment, sit back and enjoy the music.