Arts & Features » Volatility Through Editing in Happy Together 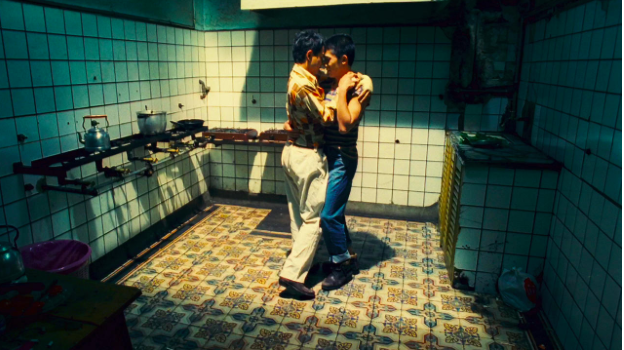 Before starting Happy Together (Wong Kar-wai, 1997), I only knew that the film would depict a queer Chinese couple. I was very surprised to find that the entire film, except for the ending, is set in Buenos Aires, Argentina. I think it was an interesting choice to move the two main characters, Ho Po-wing (Leslie Cheung) and Lai Yiu-fai (Tony Leung Chiu-wai), away from their culture. The film follows Po-wing’s and Fai’s volatile relationship rather than explore the intersections of queerness and Chinese culture. Although I was disappointed with the film in that aspect, I still very much enjoyed the narrative and Wong Kar-wai’s cinematic techniques.

I was initially confused when the film began in black and white because the promotional poster for the film features a scene in color. However, the film switched to color later, though the colors were washed out. After the switch, the choice to begin with black and white made more sense because that was the period when Po-wing and Fai split up. It is when the film changes to color that we understand that Po-wing and Fai were slowly getting back together. Whether the film is in black and white or in color, the texture of the visuals are gritty, which is representative of Po-wing’s and Fai’s volatile relationship. Furthermore, this texture shows how Po-wing and Fai live their lives on the edge since they used up all of their savings and they do not have any concrete plans.

I noticed that Wong Kar-wai constantly deploys jump cuts, an editing technique that forwards time in an abrupt transition, throughout Happy Together. He also does so in In the Mood for Love (Wong Kai-wai, 2000), but the jump cuts in Happy Together are more noticeable because they are more quick and sudden. For instance, Wong Kar-wai shows the audience a shot of Po-wing making a phone call, but the film suddenly cuts to a shot of a bus. We see Fai exit the bus and Po-wing come in the frame from the left. Fai asks how Po-wing knew where to find him and Po-wing says he called Fai’s work. By using jump cuts, Wong Kar-wai only shows what he thinks is important to the story.

My favorite moment of editing appears when Po-wing and Fai have another falling out in the middle of the film. In the dining room area, Fai sits down to eat breakfast and Po-wing gets ready to go out. Po-wing has gotten bored with Fai and decides to see other men. He wants to leave for good, but he cannot because Fai has his passport. In the scene in the dining room, Fai and Po-wing argue and Fai tells Po-wing that he will not give back the passport. Throughout this intense argument, shots are rapidly cut to show Fai and Po-wing’s expressions from different angles. As this occurs, the sound stays continuous. The use of rapid editing heightens the intensity in this crucial encounter between the couple.

Finally, I would like to address the film’s depiction of homosexuality. I feel that because the film is set in Argentina, a place with more progressive LGBTQ views than Hong Kong, the main characters’ homosexuality was never a conflict for them. Their gayness seems normalized. There are, however, hints that their sexuality may become a problem for them such as when Fai’s friend, Chang (Chang Chen), asks Fai what kind of voice he prefers in the women he likes. Another instance is when Fai explains that there is tension between him and his father, insinuating that his sexuality may be part of the cause for the tension. Nevertheless, it is still great to see portrayals of queer Asian identities on film.
For my next review, I will be watching Days of Being Wild (Wong Kar-wai, 1990), which is a film about a boy who discovers that his mother is not actually his real birth mother.