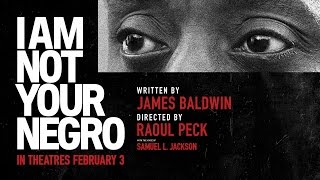 In the humid New York summer of 1979, James Baldwin sat down in his Harlem flat to work on what would be his last and unfinished book “Remember This House”; it was his personal endeavor to tell the story of race in America through the memories of his three assassinated friends —Malcolm X, Medgar Evers, and Martin Luther King Jr.

Raoul Peck—an underrated Haitian filmmaker whose previous work includes a feature on the Congolese anti-colonial leader Lumumba—would take Baldwin’s 30 some pages of unfinished manuscript as the narrative skeleton for his explosive work. With the guidance of the always unapologetic Baldwin, Peck crafts a powerful cinematic essay, weaving together archival photographs, film excerpts, and past news coverage to forcefully tackle the mythology of white innocence, the devastating reality of racial segregation in the 1960s, and the systematic brutality of white violence against African American communities.

In one of the most memorable moments of the film, Peck presents the audience with a powerful dosage of cinematic literature. It’s 1968, and Baldwin is articulating to the audiences of “The Dick Cavett Show” that “the future of the negro in this country is the future of America.” Peck swiftly cuts to the present with snapshots of police violence on black protesters from Rodney King to Ferguson, Missouri while the sounds of “Damn Right, I’ve Got the Blues” plays loudly in the back. This fusion of past and present is a direct reply to Baldwin, as if to say “this is the future of this country.” The chronological artistry is not only a mourning of the historical struggle, but a reinvigoration of Baldwin’s unique sense of urgency and purpose.

“I Am Not Your Negro” is not only a cinematic vessel for Baldwin’s own painfully honest analysis of American identity and history, but also a deep investigation of the great thinkers who informed his views. When Baldwin speaks, the audience hears two voices. The elegant prose of his formal writing, and the deep, reflective authority of Samuel L. Jackson’s narration, a stark contrast to his silver-tongued wit and uncompromising speech as a television lecturer. Donning his slim-suit and tie, a cigarette in hand and a cloud of smoke above his hairline, Baldwin epitomizes the suave of the 20th century public intellectual that has become extinct in today’s belligerently anti-intellectual mediascape.

The film is nominated for best documentary at this year’s Oscars alongside two selections that shares its concerns for America’s systematic social issues: “O.J.: Made in America” and “13TH”. Though all three films endeavor to bring forth a complex narrative on the metamorphosis of the racial blockades that have decimated this country in the last century and the psychology of those who have worked to perpetuate them, “I Am Not Your Negro” is by far the most comprehensively critical and ideologically articulate. It dissects for the audience the moral apathy of the American middle class, the spiritual numbness of a populace obsessed with consumerism, and the social ignorance of dominant white society to the plight of its neighbors. If there’s one blemish on this masterpiece, it is that Peck tries to express too many thoughts at once, running the risk of confounding the lucidity of Baldwin’s writing.

To consider “I am Not Your Negro” simply as a documentary about the life of James Baldwin is to understate the absolute truth bomb that Director Raoul Peck has dropped on the viewers. The film goes above and beyond the scope of a historical documentary by tapping into the discrepancy between the notion of progress in a “post-racial” America and a myopic white-dominated society unwilling to confront its own horrors in order to question the very foundation of American identity. Each minute of this film is a bomb. Peck succeeds in paying homage to Baldwin with a film that is as enthralling, provocative, and unyielding as the subject himself.

I AM NOT YOUR NEGRO