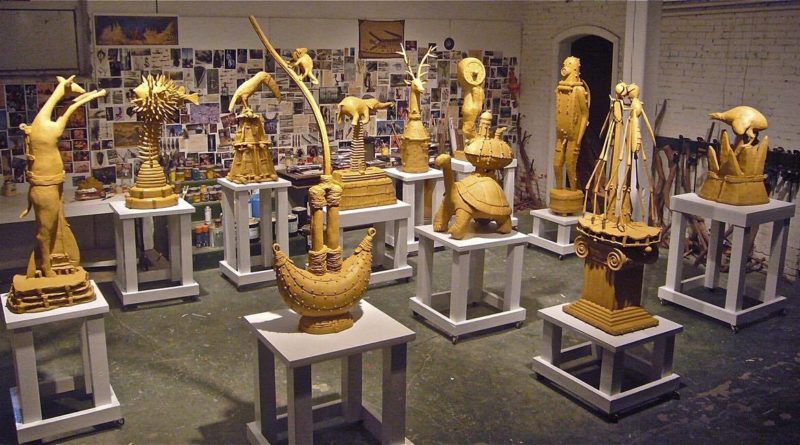 When you walk into Brian Meunier’s office, the first thing you’ll see is the man himself, seated behind his desk. He’s decorated the office with art—his own and others’. Having worked as a sculptor for over forty years, he’s learned one or two things about the art world. What is striking is how he talks about art often from a career standpoint. When he talks, he discusses art as if it’s just another career: “I’m an artist,” he says, in the same way one might say “I’m a lawyer” or “I’m a doctor.”

Meunier’s path to becoming an artist, however, was far from straightforward. In college, he first considered being an English major, then a biology major, and then an anthropology major. “Consequently,” he says, “I went to summer school every year.” Ultimately, however, his interest in art came to the forefront. “I grew up in a very working-class background,” he says, “and the notion of going to college and being an artist was not universally accepted in my family.”

“But I’ve been extremely happy having done that,” he adds, “because art is a vehicle for exploring any discipline, and that’s what I find really exciting. In any way you want to. So it represents freedom for me.”

One of the tabs on Meunier’s personal website is called “Inspirations,” and it features a gallery of works which have influenced Meunier’s sculpture. “I would say most of my inspirations are pre-Renaissance,” he says. “And part of that is that art had a different function than being simply ‘art’. It usually served a social function or a religious function or an actual function—a spoon, a bowl. That type of thing…When I first started doing sculpture seriously in college, I was very attracted to forms that had a function—forms from antiquity where we might not even know what their function was, because they seem to have an inner tease.”

Meunier’s appreciation of functional forms extends to a love of art which is almost unaware of its being art. “I was teaching once…one semester at sea, and I had to teach one course called World Art and the other called Global Modern. And, for me, the World Art—the work just seemed so much stronger, because it was imbued with an unselfconsciousness as to it being art. It seemed again that it had a spiritual function. If you think about early religious art, if you painted that painting beautifully, you were going to go to Heaven…So there was that lack of self-consciousness about art itself that I find really rewarding.”

That’s not to say that Meunier doesn’t admire the works of many contemporary artists. But when he finds a living artist whose work he admires, he says, “I will read up on them and investigate them and find out who their precedent was. Then I read up on their precedents, and their precedents, and so on, and I work myself towards the past. So maybe my love of—let’s just say ‘pre-Renaissance’, although there’s a lot post-Renaissance I love too—has to do with me always moving backwards in my investigations in time.”

He continues: “Right now I’ve finally made it back to the Assyrians and the Babylonians. What’s beyond that, going back? It might be Paleolithic art, I’m not sure. But there’s something very universal—that thrill, when I connect to the mindset of someone who lived four hundred, five hundred years ago. It’s very exciting.”

Meunier’s inspirations are also international. “I travel extensively,” he says. “I’ve lived in four countries, I’ve visited, last count, thirty-eight… I’m voracious for images. Of course, when you travel, what you see oftentimes is not so much the modern art….In India, Mahabalipuram was very important to these sandstone-looking animal sculptures that I did…Those were very inspirational.”

Recently, Meunier has made a shift in his material of choice. Previously, he worked in wood, a process which required careful planning before any work was done crafting the piece itself. Now he works in clay, a medium which he considers more spontaneous. “Even though I do a little bit of that thinking with the construct of the armature—I work around paper armatures, cardboard armatures, wood—once I apply the clay, then it’s completely spontaneous. Because basically, it’s almost like paint, it’s a liquid medium.”

The shift was partly inspired by teaching clay modelling to art students. “It just seemed to me that when I was teaching I just kept on thinking, ‘Oh my God, this looks so much fun!’” He adds, “By ‘fun’, I mean spontaneity. For professional artists, art isn’t necessarily fun…There’s a lot of professional pressures on work. But I love the spontaneity of that.”

In addition to his work as a sculptor, Meunier has also written two children’s books with illustrations by his wife, a painter. “The problem with her,” he says, “is that when she writes, one little scene will turn into 50 pages. She’s a macromalist, just keeps going. And in order to write a children’s book, you have to be a minimalist, you have to work the other way down towards efficiency, towards elemental form.”

He feels that his work as a sculptor helped him become more minimalist in his writing. “It was amazing that when I started writing, relative to the formula for a children’s book, which is about fifteen hundred words at most, and fifteen pages of text with image, is that it felt exactly like what I do when I create sculptures,” he says. “I have to plan the parts, if I count the parts there’s something between ten and fifteen parts, I have to plan the order in which I construct them, and all towards a given end. Exactly like the children’s books.”

The conversation turns eventually to the purpose of art itself. Meunier recalls the words of American artist Martin Puryear, who said in one lecture that “Sculpture is only available to those individuals who still have the capacity to slow down.” In the modern age, Meunier says, we are inundated with information that comes in small, discrete pieces, digested quickly and without much thought. “Taking the time to look at a painting,” he says, “taking the time to walk around a sculpture, is antithetical to that kind of thinking. And I think there is something very true about losing that. We really live in a two-dimensional environment of rapid images. And I think it’s doing something to the brain.”

“In some of the books I’ve read,” he continues, “they also talk about what this means for the environment, because frankly, if you can’t appreciate the slowest of objects—a tree—how are you going to understand the significance of saving that thing? So there’s been a lot written about that for several years now.”

“The reason why you study art or art history,” he says, “is the ability to slow it down, to analyze it slowly, to recognize all the signifiers in there, like almost any other discipline you study. It does that.”

Whether or not you consider yourself an artist, there’s something of value in Meunier’s words. Studying anything is, in one way or another, an attempt to slow down and see the value lying beneath the surface of the world: carving away the outside to find the beautiful form within.