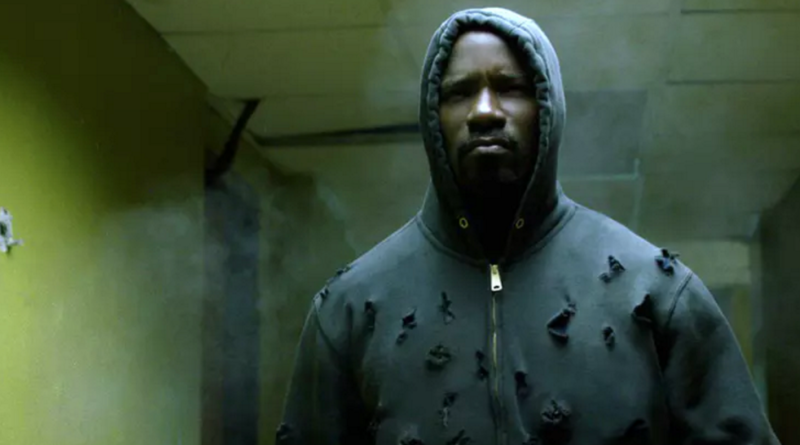 Let’s be honest. Even if the Marvel Cinematic Universe did not intend to make a political statement, its first major production about a black hero was bound to force cultural dialogue. Fortunately for us, showrunner Cheo Hodari Coker does not shy away from tense modern issues, but instead embraces them.

Luke Cage first made his way onto the comic book page at the height of the popularity of blaxploitation film, a genre of film characterized by its stereotypical and stylized portrayal of black culture, in Marvel’s  1972 comic, Luke Cage, Hero for Hire. Bedecked with afro, tiara, bracelets, and yellow disco shirt, he was a bombastic, loud-mouthed giant who would adopt (and later drop) the alias of Power Man. Today, in the hands of Netflix, he is a more reserved character, speaking little and adorned in a dark hoodie in lieu of a costume. Yet, this iteration of Luke Cage is louder and more expressive than any other.

Marvel, in its previous collaborations with Netflix, has succeeded in the casting of lead roles that are deeply personal yet uniquely evocative. Case in point: Charlie Cox as the Catholic lawyer Matt Murdock who struggles with the morality of vigilantism in Daredevil and Krysten Ritter as the snarky P.I. Jessica Jones who is a victim of emotional trauma and sexual abuse in Jessica Jones.

In Mike Colter, Marvel has found a charismatic actor who lends Cage a sullen attitude that is indicative of the vulnerability he feels despite his own resistance to injury. This not only forges an intimate relationship between Cage and the audience, but also amplifies the more intense moments in the character’s arc. His reverence for Harlem and the black community, his frustration with regularly occurring injustices (and his own inadequacy to stop them), and his personal struggle to find peace are themes that remain present for the entirety of the thirteen episodes.

Luke Cage, in this series, stands as an iconic figure, elevated to the status of a hero not by his powers, but by his relationship with the people of Harlem. He has interactions with a diverse group of people, from street vendors to politicians, and the dialogue remains unique. Even the smallest of snippets, such as a brief conversation he has with a certain world-famous rapper, imbue the series with warmth. It is these relationships that truly make the series life-like and relevant.

Oddly enough, we probably see more of the streets of Harlem in the title sequence than in the episodes themselves because most of the events take place in a few specific locations. Yet, one can still come out of each episode with a taste of the neighborhood’s diversity. The masterful portrayal of characters gives Harlem and its story life. No one is a throwaway, no matter how brief their appearance. A character like Detective Rafael Scarfe (Frank Whaley), who could have been easily glossed over, has a rich background with a touching personal motivation for his actions and an arc that comes full circle.

One of the most touching relationships we see is that between Cage and Pop (Frankie Faison), a reformed gangster who is now the gentle owner of a barber shop who employs Cage and essentially forces him to ask the question: is heroism worth it? Cage is initially ambivalent, struggling between action and inaction, intolerant of inequity, yet apprehensive of intervention. He consistently denies being a hero, instead relishing his anonymity as a hair-sweeper-cum-dishwasher. But it is Pop’s motto, among other things, that compels Cage to go to the frontline: “Always forward”

But Luke Cage does not exactly barrel through its plot. Its slow pace gives itself time to delve deeper into characters. This works especially well for the portrayal of the antagonists. Cage’s adversaries, for the most part, are as vivid and polyphonic as he. Cornell “Cottonmouth” Stokes, played by the fascinating Mahershala Ali, is a mob boss, driven only by his hunger for power. Despite being one-note, he is elegant, charming, and satisfyingly relentless. His cousin, Alfre Woodard’s Mariah Dillard, is far more complex. As a politician who aims to bring change and progress to Harlem, she reaches out to her criminal cousin for funding, which sets her down a dubious moral path that results in some compelling character development. A personal standout was Hernan “Shades” Alvarez, played by Theo Rossi, a menacing, slippery delight in every scene who is more than just a regular old henchman.

However, the show’s primary antagonist (who will not be named to avoid spoilers) falls completely flat. Due to a bland portrayal and an even less compelling motive, it is impossible to get excited by him.

Unfortunately, since so much of the plot is focused on Luke Cage’s conflict with this particular enemy, the story itself becomes embarrassingly predictable. Plot devices that could have been easily avoided are included anyway, which causes the series to lose steam halfway through the season as it begins to telegraph its own punches. Many plot elements, such as Cage’s “origin story” and forced love interest, are uninspired and even downright maddening at times. For all of the progressive elements that this series boasts, it cannot seem to shake off the shackles of certain done-to-death superhero tropes that audiences are all too familiar with.

Despite its shortcomings in storytelling, Luke Cage is still inspiring in its boldness. Coker celebrates Harlem, and he celebrates black America. He references Crispus Attucks, a black man considered to be the first American to die for the Revolution, and layers his scenes with jazz and hip hop, thanks to the musical efforts of Adrian Younge and Ali Shaheed Muhammad, as well as a myriad of performers who appear on-screen. He handles touchy issues like police brutality, human exploitation, and racial profiling with grace, though not to the extent I had wished for.

Cage’s hoodie is a poignant allusion to Trayvon Martin’s shooting, who was killed while wearing one. Of particular note are the callbacks to blaxploitation. Villains chew the scenery and wear flamboyant garb, our hero fights with swagger and has a way with women, obvious visual symbolism runs rampant, and Cage’s funky comic book catchphrase, “Sweet Christmas”, is heard multiple times. The mostly dark color pallette is interrupted by bright neon lights of immersive shades, with the persistent yellow lights of the streets blending with and giving richness and dimension to Cage’s bulletproof skin.

Indeed, the word “bulletproof” is used to refer to Cage throughout the series, never “invincible” or some other synonym. Here, the black man’s skin, that has historically been the reason for his oppression, is now his strength. He cannot afford to squander this power, for the sake of causes much greater than one man. He takes the beating because he can and he must. Crispus Attucks was not bulletproof. Martin Luther King was not bulletproof. Trayvon Martin was not bulletproof. But Luke Cage is, and that is his power.