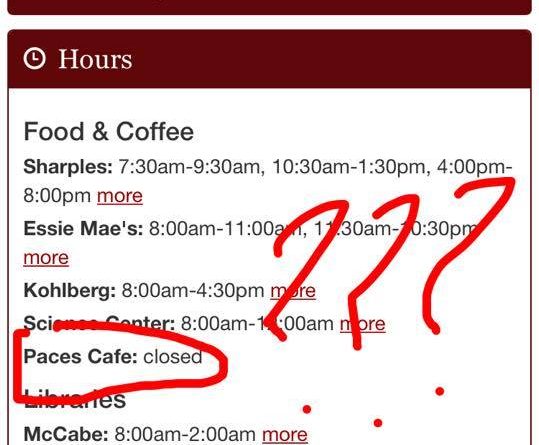 Every day, I go onto the Dash to see what’s for dinner. On nights when they have crappy options like Tilapia (fish is gross) I often find myself desperate for other choices.

I can go to the Ville, but that’s a lot of walking and also requires me to convince someone to go with me. Renatos is usually a solid Thursday night option but it’s not like you can go every day. Happy Wok has good dumplings but that’s not a real meal. My friend with a car isn’t always up to drive me everywhere.

The Dash has another option. It is something called Paces Cafe, but the Dash always tells me that it is closed. The fact that it tells me it is closed every night means I have never really tried to go.

Apparently, it isn’t actually closed. Some of my friends told me that it would be open on the night of October 17th, and I decided it was about time to check it out.

For anyone who needs help on finding Paces, it’s located in the same place that Pub Nite is. For those who don’t know where Pub Nite is, it’s right next to Essie’s, but down a narrow and dimly lit hall. For those who still need help, well, you probably don’t leave your dorms, so I’m not helping you.

I had some chips and guacamole to start. The guacamole was superb, so I found the chef who prepares it. Turns out, Willets 125 extraordinaire and famed Late Nite sushi chef Henry Han ‘20 is the man behind the guac. “I make the guac because it’s better than making salsa. I might think that because I am allergic to tomatoes.”

After my guacamole, I ordered a cookies and cream milkshake with Reese’s Pieces. The milkshake came in a cold metal cup, which meant I had to stay to drink it. This was an issue for me, since my computer had died at this point and I still had a lot of homework left to do. The milkshake was good as well, and I got a brain freeze trying to gulp it down so I could return to my reading.

My visit to Paces satisfied my hunger, but I feel that it still may have some flaws. First, someone should probably fix the Dash so we know it’s open. Also, I look forward to the day they start accepting OneCard (as they reportedly soon will). When given the opportunity to spend Points instead of cash, I tend to have “Treat yo self” moments and will likely splurge on more milkshakes. Overall, it’s a solid, yet flawed option, and given the addition of OneCard, I might become a regular.