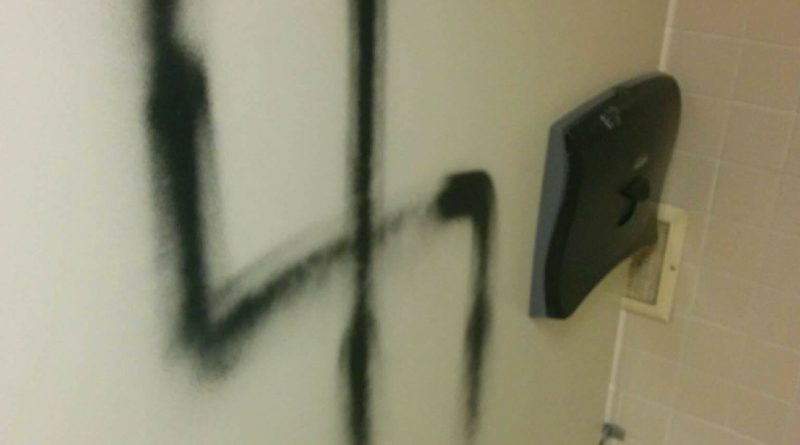 Clarification: The original featured image of this op-ed caused some confusion because it showed a cemetery that had been graffitied over. The Swarthmore incident occurred in a bathroom, and we apologize for the misleading effects of our original image choice. The current image was obtained after the article was already published, and depicts the actual Swarthmore graffiti.

By now you’ve probably already heard that on Tuesday night students discovered swastikas graffitied in McCabe. I’m not sure what’s worse: the fact that this incident happened or the fact that I wasn’t all that surprised.

You’d think that I’d be shocked to learn that the symbol of the regime that brutally murdered dozens of my own family members, including my great-grandfather and his brothers, was drawn in my campus library. Instead, I find myself feeling depressingly unfazed, almost numb.

Maybe seeing Nazi imagery across Europe when I was there last January desensitized me. Maybe reading about anti-Semitic incidents at colleges across the country has prepared me. Maybe constantly seeing images of anti-Semitic graffiti in the news shared by frightened Jews, like the image accompanying this article, has numbed me to the horror of what such graffiti represents.

Drawing swastikas, the symbol of Nazi Germany, has long been a method of intimidating and spreading terror amongst those groups targeted by the Nazis, particularly Jews. Yet, the growing global and national tide of anti-Semitism made this all too predictable.

The greatest barrier to confronting anti-Semitism in 2016 seems to be proving that it exists. As a liberal Jew, it is immensely disappointing to see so many people with whom I ideologically align on so many issues completely dismiss the reality of a rising tide of anti-Semitism.

The apathy and, at times, antipathy of many on the left when it comes to anti-Semitism is a deep betrayal of the Jewish people. We see it when Stanford students argue that propagating the Nazi conspiracy theory of  “Jews controlling the media, economy, government, and other societal institutions” is not anti-Semitic. We see it when the Vice-President of the UC Santa Cruz Jewish Student Union, a member of student government, is asked to abstain on a vote relating to Israel because of his “Jewish agenda.” And we see it most virulently on anonymous forums, when students on our own campus’s Yik-Yak assert that Jews should view their ethnic heritage as akin to being “descended from a Confederate officer” and that anti-Semitism itself is a conspiracy invented by the Rothschild banking family to let Jews oppress people of color.

Then, of course, there is the relentless and overwhelming victim-blaming of Jewish students for anti-Semitic acts committed against them. The rejection of victim-blaming is a key component of the left, and for good reason. Those that justify their disgusting Islamophobia based on the actions of ISIS or the Saudi government are neither justified nor excused. And yet, I cannot count the number of times I have been told that it is Israel, and the diaspora Jews who support it, who are truly at fault for rising anti-Semitism! Anti-Semitism seems to be the exception to how we confront stigma and discrimination on the left.

We Jews, so often described as ‘whiny,’ ‘paranoid,’ and ‘manipulative’ are assumed to be liars. The left is all too ready to use excuses that would never fly in most discussions of bigotry. Even at Swarthmore it’s somehow acceptable to say “I didn’t mean to be anti-Semitic, you’re just too sensitive and/or paranoid.”

As a Jew, it is clear to me what all this second-guessing and hypocrisy from many on the left means: they simply do not believe anti-Semitism is a problem. For them, bringing up anti-Semitism is merely a nuisance tactic employed by Jews to derail discussions about “real issues.” For some leftists, trafficking in common anti-Semitic stereotypes is a price they are willing to pay to achieve their political goals.

Make no mistake, this price is not small. It’s dangerous to condition people to tune out claims of anti-Semitism and to assume those who make accusations are, as reportedly described by the new CEO of the Trump campaign, “whiny brat Jews.”

We Jews are just a small part of this country, no matter how large our presence on this campus may seem. We are under 2% of the national population and a tiny fraction of a percent of the global population. A century ago, Jews lived relatively prosperous lives in Germany. We were disproportionately represented in fields of law, finance, and medicine. We even held some high level political offices. So naturally, when German Jews complained of anti-Semitism, they too were accused of “whining.”

This is not the early 20th century and we are presumably not on the verge of another Holocaust, but we are clearly seeing a rising tide of anti-Semitism accompanied by an overwhelming denial of that fact from both the left and the right. As the influence of the alt-right grows in the Republican Party, Jews in this country are more fearful than they have been in decades, yet many on the left remain in denial of this reality and even help perpetuate it.

What depresses me the most is that this is happening just a week after so many new students arrived on this campus. To Jewish first-years, and to the first-years of every other identity threatened by White Supremacy, I say this: you are not alone. Talk to Kehilah (our campus Jewish community), talk to CAPS, talk to your friends, and talk to Jewish upperclassmen who are feeling the same frustrations and fears as you.

And to those who are not Jewish, I urge you to listen. Do not be the person who only brings themself to recognize that racism is real when they see a burning cross in their black neighbors’ yard. Recognize that this incident is just the most visible and obvious form of anti-Semitism. Recognize that when you are talking about issues relating to Jews, Jewish identity, and yes, even the Jewish State, it is important to think carefully and consider whether your words are anti-Semitic. Recognize that anti-Semitism is a problem not just in the Middle East or Europe but here in this country and on this campus as well.

Remember that many, if not most, of the Jews you meet here had grandparents, great-grandparents, or other family members who were tortured and killed under the symbol that was drawn yesterday.

Never forget the pain of our past, recognize the anxiety of our present, and listen to our fears for the future. Listen to us. Not just today, not just when the next anti-Semitic incident occurs, but on every day to come.

Featured image shows one of the swastikas. By Ziv Stern ’20.