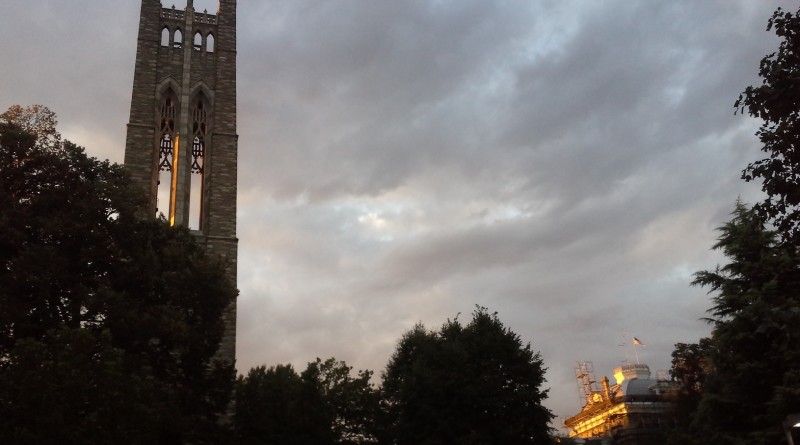 A Kappa Alpha Theta (KAØ) chapter was reestablished at Swarthmore in 2012. Advertising values of diversity, friendship, social service, and academic achievement, the sorority maintains a roster of 44 members after three years, despite student concern.

In the 1930s, there were six sororities on campus, and almost 80% of the female students at Swarthmore were involved in Greek life. Then Swarthmore College President Frank Aydelotte wrote in a statement, however, that this leads to a “situation which tends to be uncomfortable for the minority left outside.”

In response, three solutions were proposed: limit the enrollment size, include all women in sororities, or abolish all sororities. In 1933, the Women’s Student Government Association—consisting of all female students—held a vote, which resulted in the abolition of sororities (168 to 109 votes). A similar vote was held in 1952 for men’s fraternities, but 57% of the students opposed the abolition.

In 2012, students in the group Not Yet Sisters chose Kappa Alpha Theta as the national sorority to affiliate with. The goal of Theta is to “nurture each member throughout her college and alumnae experience and to offer a lifelong opportunity for social, intellectual, and moral growth.”

The founders faced criticism from some of the student body, stirring concern about the sorority being “inherently exclusive.” But their plan to bring back a sorority was protected under Title IX, which guaranteed equal opportunities to men, who had opportunities to join fraternities. A referendum to abolish all greek life in 2013 failed, paving the way for the sorority to exist alongside fraternities.

The current demographics of Theta suggest that there is significant diversity within the group. Among the 44 members, including those studying abroad, an estimated 60% are women of color, according to Marissa Bradley ‘17, Chief Executive Officer of Kappa Alpha Theta. Furthermore, nearly 20% are international students, which is higher than the percentage of international students in the whole student body.

Recruitment takes place in the first four to six weeks of the fall semester. In addition to the desire to join Theta, there are formal requirements involved in becoming a member. For example, one must attend at least one “Meet the Sisters” event and at least one information session, as well as meet the high school GPA requirement of 3.0.

“The process is not competitive, and our goal is to offer bids to as many women as possible, rather than exclude any potential new members,” Bradley said.

Irene Xiang ‘18, the Chief Financial Officer, said the dues for new members in the fall semester and spring semesters are $350 and $225, respectively. For old members, the dues are $350 for the fall and $175 for the spring. In other words, if one joins as a freshman, her total dues throughout the 4 years will amount to $2,150.

For those unable to pay the dues, Theta offers either a monthly payment option, a need-based subsidy from a scholarship funded by its alumna, or an option to file an inactivity petition which allows them to forgo the payment but prevents them from participating in events.

The sorority also offers academic support to its members, such as academic mentors, study sessions, and programs that enable younger members to connect with older members in their field of interest. There is also a GPA requirement of 2.7 for general members and 2.85 for officers. For members who fall below the GPA requirement, Theta offers a support program.

The sorority aims to create a strong bond among its members and achieve personal excellence through friendship.

“We cook Theta dinners once per week, as well as organize sisterhood events that fall anywhere from watching a movie, to visiting a trampoline park, to touring an art museum,” Bradley said.

Social service is another key aspect of the sorority. Each member participates in at least six hours of service per semester.

Court Appointed Special Advocates (CASA)―an organization that supports abused and neglected children in the court system―is its philanthropy partner. According to Bradley, their chapter has raised thousands of dollars for the Delaware County branch through philanthropy events, fundraisers, and awareness campaigns.

“Often, the chapter averages over 10 service hours per member, well above our requirement,” Bradley said.