Arts & Features » We All Looked Up: Letting Go and Holding On In the Face of Astor 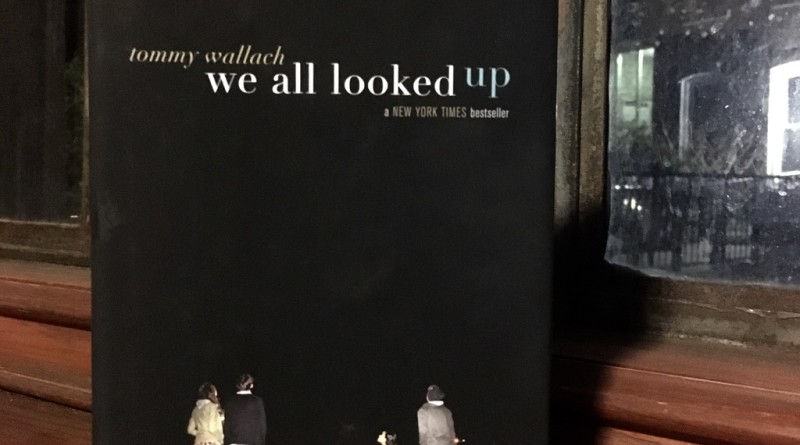 If you’ve stepped into the Young Adult Fiction section of Barnes and Noble anytime recently, I can almost guarantee that you’ve seen Tommy Wallach’s We All Looked Up surrounded by, well, many other copies of the same novel. Almost a year after its initial publication, it continues to draw on its young audience so much that even in our local Barnes and Noble in Rittenhouse Square, you can find a whole small table dedicated solely to this novel. Well-written as it may be, part of its success definitely lies in its title and cover, a fact that even Wallach is aware of in his acknowledgements where he says that designer Lucy Cummins, “deserves a medal made out of chocolate.” With a catchy title that points us to the sky and a group of teenagers looking up towards this cosmic body, we know immediately that our characters will be dealing with more than just the usual high school drama.

Wallach’s We All Looked Up follows the journey of four high school teenagers as their world helplessly faces almost certain obliteration by the coming asteroid Astor. Each character begins in starkly different circumstances that are unfortunately tired-out tropes of the teenage experience: 1) the hot jock who is dating the dumb, blonde Stacy (no, really, I’m serious, that’s her name) 2) the weird, “indie,” artsy girl who is actually cool 3) the really smart girl who hasn’t had too much of a social life and 4) the stoner who doesn’t have all that much going for him. Had the novel not begun with the certainty of oncoming destruction, a fact that immediately spurs characters to step outside of these stereotypes, I might have dropped the book completely.

Fortunately though, Wallach’s “karass,” or “a group of people linked in a cosmically significant manner, even when superficial linkages are not evident,” which includes the novel’s minor characters, come together to give us readers one final, compelling story before the end of the world. The coming of Ardor forces the characters (and the world in general) to escape the confines of their daily existence in high school, work, etc. to deal with the much more important matters of their life. Relationships between family and friends become strained as characters must come to choose who and what matters to them. No longer are they able to continue living life without critically thinking about their actions. Every day is one less day, every conversation and kiss with others can easily be their last.

The realizations that these characters make work to present readers with a paradox arguing simultaneously that everything matters but that nothing really matters. When faced with death, the lives that these characters have invested in become meaningless–it doesn’t matter how well they did in school, how little they have done, or even how important their relationships to each other had once been. As Eliza explains, everything, people and material objects, are just an event, the “way that time manifests itself.” But at the same time, it all matters, everything is still “every bit as important as a mountain. It’s as important as the end of the fucking world.” Every single moment matters to these characters, from the seemingly mundane to the more intimate and dramatic.

Unfortunately, as the world realizes, everything has an end. Their relationships and time spent with each other, just like the mountain, are fleeting. People and relationship are not immune to the changing effect of time. But “You [don’t] win the game of life by losing the least…Real winning was having the most to lose, even if it meant you might lose it all. Even though it meant you would lose it all, sooner or later.” While We All Looked Up makes a point to remind us that everything does indeed end, Wallach finishes with the reminder that the inevitable end is the very reason why we should enjoy it all the more.