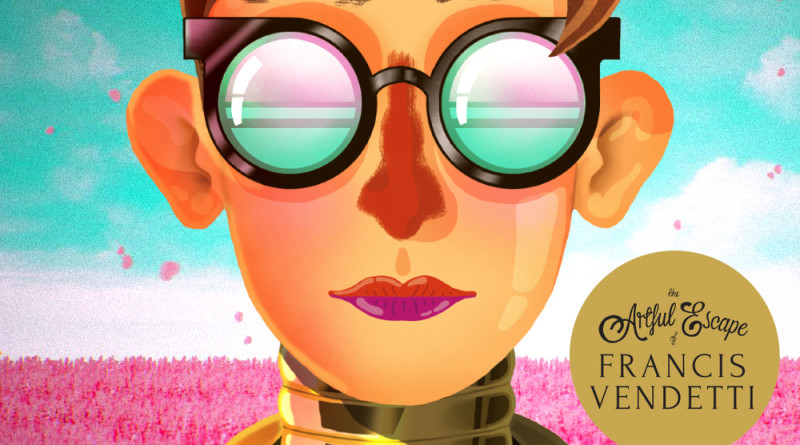 Imagine if Wes Anderson had directed Inside Llewyn Davis. No wait, imagine Close Encounters of the Third Kind starring David Bowie. Actually, imagine if Hayao Miyazaki designed a thrash metal album cover. These elements are coming together in the upcoming video game The Artful Escape of Francis Vendetti, which is currently on Kickstarter.

“On the eve of his first performance Francis Vendetti battles with the legacy of a dead folk legend and the cosmic wanderings of his own imagination,” reads The Artful Escape’s Kickstarter page. Francis’s uncle was a folk music legend. Feeling the weight of having to live up to his uncle’s legacy, Francis leaves his hometown for an interdimensional journey to find himself and his new persona.

I had the opportunity to sit down and talk with the man behind The Artful Escape, Johnny Galvatron. Australian-born Johnny looks like a rock star. He has long, flowing, bleach-blonde hair. Johnny’s varied experiences leading up to The Artful Escape are a clear influence on its design and style.

“I studied game development at uni and about a week after I graduated the band I was in signed a really big record deal with Warner Bros. and I didn’t go home for like five years after that,” Johnny recounted.

He went on to describe his touring experience. “We had a couple of hits and toured the world, got to play a lot of big festivals, toured with Def Leppard and The Police, Tame Impala and all these fun bands. After that, I really hated touring, I was really bad at it, so when I came back I wrote a novel ‘cause I didn’t want to leave the house ever again,” he said.

Johnny makes it sound natural, as though of course the first thing he would do after touring the world would be to write a novel. After finishing his novel, he fell back into game development and that is when The Artful Escape began.

“It started out as…‘imagine if young David Bowie had left England to go on an interstellar journey to create Ziggy Stardust,’” Johnny said. “The Artful Escape itself revolves essentially around world building, and how artists can inform and elevate their art through things that aren’t their art,” he added, describing his fascination with the worlds that artists build around their art.

“It’s an external trip into the multiverse, but it’s an internal journey for Francis,” he described.

Johnny described how Francis begins his journey, demonstrating the game’s style and weirdness. “My favorite part of fantasy storytelling is always the door. It’s always that threshold into the next world…The door we have in this world is super cool, it’s in the basement of Lightman’s Reptile and Telescope Emporium, which you can only get to by breaking into an abandoned diner and playing “The High and Mighty” by Victor Young on the jukebox and then returning the way you came. It’s gonna be a series of incredible doorways throughout this world.”

The Artful Escape is part platformer, part narrative adventure game, part rhythm game, and one hell of a trip. With style already pouring out of this game’s every orifice, Johnny described his unique approach to the gameplay, the most interesting element of which were the sampling and music playing.

“In [The Artful Escape] you walk around, you have a little field recorder and you can record the different wildlife,” he said. These recordings become musical samples. “You can use these samples to gain access to new areas, hypnotize creatures, obtain more samples, or just create your own music,” the Kickstarter page reads.

“The sampling and the jamming, I want it to be more of a creative mechanic,” Johnny described. “There’s different kinds of fun. You can have fun playing paintball with your friends, but it’s also fun to play music with your friends, in a band scenario. But they’re two very different kinds of fun, and a lot gameplay mechanics is based on that ‘aim up the reticle, pull the trigger’ and I wanted our mechanics to be a different kind of fun, a creative kind of fun, something that wasn’t necessarily dictated by time or by constraints or by achievements. You can just make music until you want to move into the next area,” he said.

“[Creative mechanics] are severely lacking in video games,” Johnny said. “When you play boss levels, you use all your samples to jam with the creatures and then play your guitar with them,” Johnny said. The idea of the jamming and sampling as a creative mechanic is one of the things that excites me most about The Artful Escape.

They’ve put out a version of the in-game sampler that you can play with to see what it’s like. I spent a good fifteen minutes playing with it, combining the different sounds, beats, and licks. As someone who loves music but has no music playing/writing ability, this thing was a blast. It made me feel like I was creating music.

“Making music, when it feels effortless, is great. Hopefully that mechanic can convey some of those feelings,” Johnny said. You can click here to check it out for yourself.

Talking to Johnny, he seems so genuinely excited about working in games again and specifically on The Artful Escape.

“Game development is very much like rock and roll and grunge and garage in a way. I think some people cringe at the comparison between indie games and rock and roll but I think it’s apt. Just that sense of making something in your bedroom from what you have around, which is that spirit of grunge or garage or punk. I think indie game making is the garage, grunge, punk of our time,” he said.

With our interview over, Johnny left to go to the Golden Plains Music Festival outside  Melbourne. What a guy.

You can help The Artful Escape of Francis Vendetti get finished by supporting it Kickstarter.  They’re currently at about $13,000 of their $35,000 goal, with backer rewards ranging from a copy of the game to the soundtrack on vinyl. The Artful Escape is doing some of the coolest, most stylish things I’ve seen in a game in some time. This game deserves to be made.