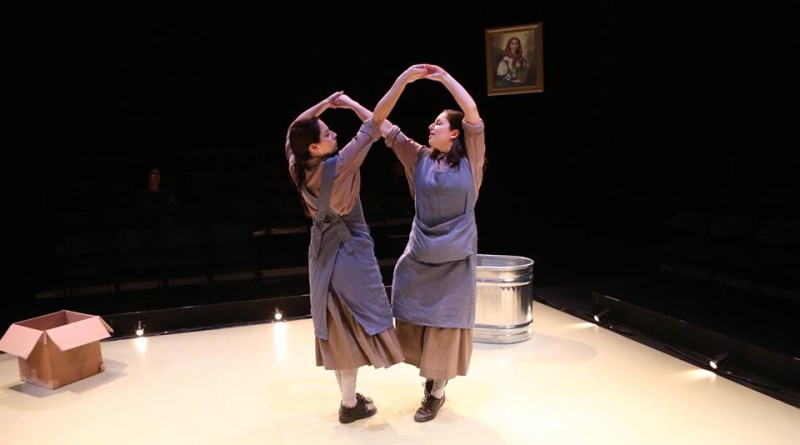 This past weekend, the Swarthmore College Department of Theater put on a production of Airswimming. It is a play founded on intimacy. From the size of the Frear Ensemble Theater, to the nature of the plot— the performance demands it.

Written in 1997 by Charlotte Jones and set in 1920s Ireland, Airswimming tells the true story of two women who have been incarcerated in a mental institution for the “criminally insane.” That is to say, an institution for women who deviate from behavior not customary in British society at the time.

Upon entering the Frear, and, thus, the mental institution, there is little to see: a box, four hanging paintings, a stepladder, and a tub. This remains the case throughout the play, as the intimacy is founded on the lack of material substance in the space, and it is, instead, filled with the forgotten stories and experiences of the women who inhabit it—Dora, played by Michaela Shuchman ’16, and Persephone, played by Michelle Johnson ’16.

Directed by K. Elizabeth Stevens, assistant professor of acting and directing, Swarthmore’s production of Airswimming is the Honors Acting Capstone for Shuchman and Johnson, and they have far and away done this beautiful work of theater justice.

It’s as if the two of them were made for these two captivatingly different performances— Dora (played by Shuchman), who is slightly older than Persephone (Johnson), is incarcerated because of her desire to live like a man and has grown cynical in her time there. Persephone, on the other hand, enters the institution under the impression that she will soon be free, despite having been condemned there for bearing an illegitimate child.

The character dynamic is electric. Johnson and Shuchman infect the audience with emotions ranging from anger, delighted humor, and, perhaps most importantly, a profound sadness rooted in the nature of their situation and the unfortunate treatment of women at this time.

Over the course of the play, their characters develop alter egos, Dorph (Dora) and Porph (Persephone), in order to overcome the mental and emotional strain of their unfortunate and fundamentally unjust situation. For them, these egos are a method of escape. Porph’s entertaining obsession with Doris Day coupled with Dorph’s stoic tolerance of her shenanigans make for a charming and sometimes tense relationship, which Johnson and Shuchman deliver marvelously.

Throughout the performance, we learn of their lives, their anxieties, their fears and desires, and we embark on their 50 year journey together, broken by scenes where Dorph and Porph swim through the air— where reality is suspended for just a moment, and they are not themselves or their hardships and we, too, are not ours. Where the world is fair. Shuchman and Johnson’s performances during these moments of vulnerability draw tears from the eyes of the crowd in a wholly emotional experience.

Though the women of this play were forgotten— Dorph, Porph, Dora, Persephone, and the real incarcerated women of England— the incredible work done by Stevens, Shuchman, Johnson, and all other crewmembers, will not.

Photo Courtesy of the Swarthmore College Department of Theater