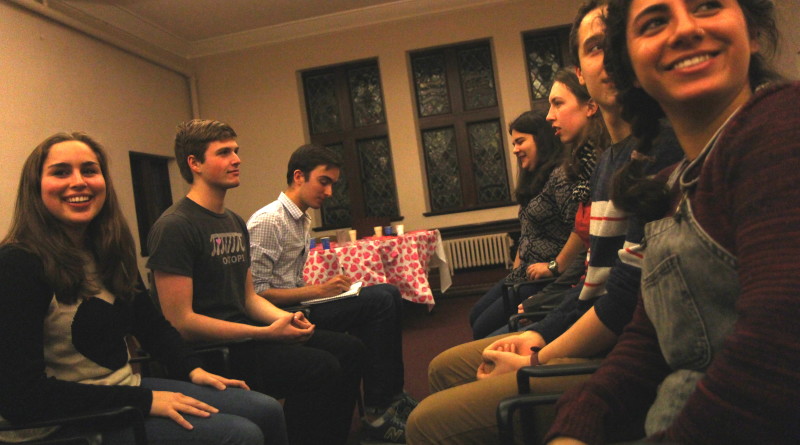 At 7 o’clock last Friday, Bond Hall bustled with activity: a handful of Kehilah members walked around, often at a brisk pace, making final preparations for “Matchmaker Shabbat.” In anticipation of Valentine’s Day, Kehilah had decided to organize this jewish-themed speed-dating event, open to all.

As I walked around awkwardly, waiting for people to arrive, I surveyed the room. The walls bore ribbons and the tablecloths bore hearts. On a large table, a plastic-wrapped party pack identified itself as “60 amazing plates.” The plates were pink, but otherwise unremarkable.

By 7:15, the slated start date, over a dozen people had assembled. The organizers, chief among whom was Rachel Flaherman ‘16 (“Yes, I am the mastermind,” she later told me) had started handing out four varieties of heart stickers.

“I’m wondering if these hearts mean anything,” Colin Crowley ‘18 said. “If we have to find matching hearts or something.”

I suggested that the stickers were perhaps a metaphor for speed-dating in its noblest form. Crowley agreed.

“That would be ideal: searching for someone to match your heart,” he said.

The true, mundane purpose of the stickers was soon revealed: each variety of heart corresponded to a different round table. Guided by our hearts, we took our seats.

“What draws you to Kehilah?” someone asked to break the ice at our table.

A variety of answers, then a quotable one.

Soon, the music distracted me from the conversation. I asked who was in charge of the playlist.

Simona Dwass ‘19, standing at another table, said it was Rachel Isaacs-Falbel ‘19.

I asked how to spell her last name.

“Is it important that you have it spelled?” Dwass shouted, presumably raising her voice to bridge the inter-table divide.

Embarrassed by this awkward cross-table interaction, I quickly turned back towards my tablemates. They ate their dessert, ready to begin the dating portion of the evening. While the event was advertised as open to all, the vast majority of attendees seemed to be Jewish; many regularly attend Shabbat dinner on Fridays.

Flaherman picked up a switched-off microphone and announced the end of dinner. We pushed the tables aside and set up our chairs to face each other in two rows, ten chairs on each side, with one chair between them: the odd one out.

The speed-dating game went as follows: The entire group (twenty-one people at this point) circled the chairs to musical accompaniment, including the jaunty Hava Nagila. When the music stopped, we sat down and talked to the person sitting across from us. Flaherman gave us a conversational prompt each time.

My first match was the aforementioned Josh Wolfsun; Flaherman’s prompt asked us to each tell a story about food. Since Wolfsun was back off the record, there is little I can relate about the conversation. A series of other prompts and conversations followed. All were interesting; some were awkward; none were romantic. I eventually got to Amit Schwalb ‘17.

“Funny, but not necessarily fun,” he said to describe the evening.

I asked if he felt that the event was accessible to non-Jews. Though I felt welcome as a non-Jew, the event was heavily seeped in Jewish culture. One of the prompts asked whether we identified more with matzah ball soup or gefilte fish, which I had to get explained.

“This may have been a harder entry point [for non-Jews],” Schwalb said, explaining that because the event was somewhat awkward, people more readily fell back on a shared Jewish culture as a safe way to connect.

“When I meet new Jewish people what we have in common is that we’re Jewish,” he said, recalling that at a recent Shabbat lunch in Philadelphia, he had talked with a stranger about whether teleportation is permitted on Shabbat.

This event, too, seemed more likely to engender a conversation about teleportation than a romantic date. To find a romantic partner, students were probably better advised looking elsewhere.

“It seems like everyone had a great time,” Flaherman said as the event came to an end. About a dozen people continued to sit in the arranged chairs, chatting with those around them.

Shirah Kraus, a Bryn Mawr student, sat in one of the chairs. A friend of Flaherman’s, she had come to the event hoping to meet people, and said she had had a good time. When comparing Kehilah to Bryn Mawr Hillel, she touched on slight political differences, but something else stood out to her much more.