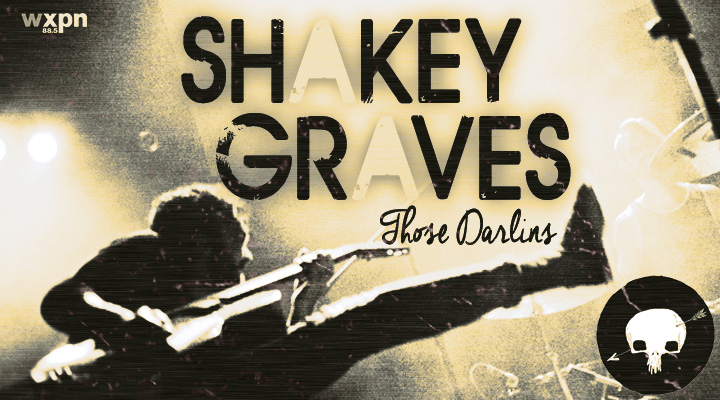 After a journey filled with cancelled trains, buses, more delayed trains, and what seemed like endless walking, eventually my friends and I finally and somewhat late arrived out our destination.  From the outside, the Electric Factory looked like a gritty industrial building bordered by a large parking lot and chain linked fence.  The only distinctive feature of the concert hall was a neon sign depicting Ben Franklin emblazoned with the name of the headlining act: Shakey Graves.

As we quickly and somewhat warily filed into the building (thinking we should perhaps do more research on future Philly adventure – see Fringe Arts Festival Article) and were met by a wave of heat.  We looked around the small venue.  The gritty, standing room only, industrial style of the building was mingled with its undeniable cuteness. The beams were draped in twinkling lights and colorful lanterns, and the walls were covered in inviting, neon graffiti advertising upcoming shows.  After venturing to the equally cute and surprising clean bathroom, we staked out our “perfect stop.”

Even more fashionably late, the hipsters in all their boho-chic glory began gathering in the small pit area.  Feeling hopelessly less stylish and drained from the prior week, we continued to simply wait.  Finally, only 10 minutes late , the opening act, Those Darlings, took the stage.  The lead singer looked no older than 16 years old.  Clutching a guitar slightly bigger than her body, the tiny woman began.  The eclectic Nashville, rock, feminist group set the tone for the night – excellent.

When Shakey Graves finally came on, the crowd erupted in excitement.

However, audible above all others was that one guy – the guy that everyone knows – the guy at every concert- the drunk guy who dances disjointedly and unconsciously, professing his undeniable love for insert band name here.

Shakey Graves adeptly handled the crowd – pausing, taking rifts, interacting with fans and even catching a beach ball from the crowd.  I was entranced with every strum of Shakey’s guitar.  His music had played an integral role in my life.  For the entire month of May of my senior year of high school, my sister and I blasted “Dearly Departed” on our way to school, waiting in the parking lot for the song to end.

Standing there in the Electric Factory with my new, wonderful friends – I was aware of the the juxtaposition of the situation. I was  at once in the past and the present.  I was flooded with memories and experiences that Shakey Graves had been a part of.  The music that I had so long associated with my high school self was following me into my new life.

As Shakey deftly played opening chords to my favorite song “Dearly Departed” – I felt as though I was having a spiritual experience.  Perhaps the manifestation of my inner feelings, that guy – ramped up his “that guy” behavior.

As the concert drew to a close I was so happy.  I almost did not care about the re-emergence of the “recalculating” reframe.  Uber proved unresponsive and completely frustrating.  After a several failed attempts, we finally secured a credit card compatible and utterly overpriced taxi.  The air had a youthful tinge. We felt absolutely and unquestionably 18 as we settled our tired, over-stressed, over-worked selves in the cab.