News » Around Campus » Mountain Justice Protests Board, Citing Republication of Board Data by IPAA 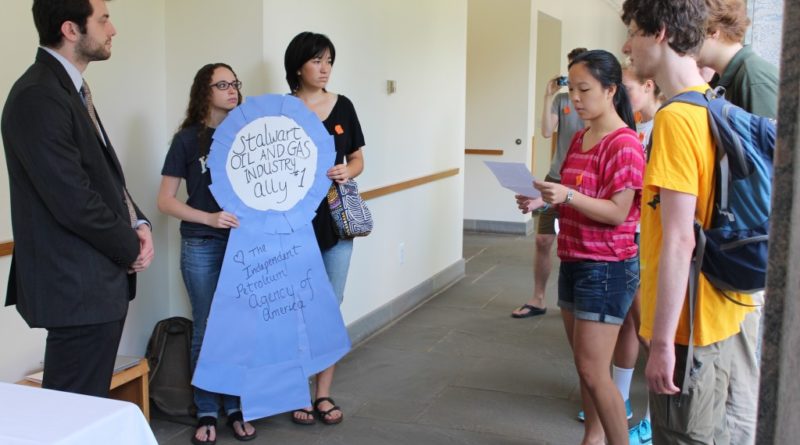 As the Board of Managers held their first meeting of the academic year, members of Mountain Justice staged a protest in response to the publication of a paper by the Industrial Petroleum Association of America that cited divestment cost estimates put forth by the Board in their decision not to divest last spring. MJ members gathered in Parrish Parlors and brought out a blue cardboard cutout in the shape of a prize ribbon. The ribbon read, “Stalwart Oil and Gas Industry Ally #1.”

The 2015 IPAA paper referred to by the MJ protesters, titled “The Divestment Penalty: Estimating the Costs of Fossil Fuel Divestment to Select University Endowments,” cites the Board’s cost estimates and statements as an example of colleges weighing the costs of divestment over what are seen as minimal environmental benefits.

Commenting on a media statement made by the IPAA after the Board’s decision in May, MJ Member Chris Malafronti ’18 said, “In that statement, [the IPAA] really just affirmed the fact that Swarthmore College is standing on the wrong side of history — basically congratulating the college on ‘good thing you didn’t take into account that 32 day sit-in that those students did. Good thing you didn’t care about all those actions, and take action of your own.’”

“We wanted to start off with an action that was a little more playful, something that would get us started off…” Malafronti explained. “We can really grow from this action, and continue to look at the year that might move toward more escalatory things. Just like we saw last year with the sit-in — we saw it grow over the course of the year.”

At the protest, MJ Member Stephen O’Hanlon ’17 argued that the IPAA cited Swarthmore’s statistics because their cost estimates are more severe than most other universities. The IPAA’s divestment lobbying website, divestmentfacts.com, has a page dedicated to the college. The page features quotes from the Board regarding its decision against divestment, including:

“It is our collective judgment that the cost of divestment would far outweigh any potential benefit. If we thought divestment would change the behavior of fossil fuel companies, or galvanize public officials to do something about climate change, or reduce America’s reliance on fossil fuels, this would be a much tougher decision. We believe we have other, more effective means to achieve this objective.”

From Parrish, the protesters marched behind the Board’s blue ribbon to the Scheuer room in Kohlberg, where the September board meeting was being held. Chair of the Board of Managers Thomas Spock declined MJ’s invitation to come out of the meeting and accept the ribbon. O’Hanlon argued that this was a good sign and that it demonstrated the power of the divestment movement. MJ members Jacob Malin ’18, Annie Zhao ’18, and Sarah Dobbs ’18 took turns reading a prepared statement from outside of the meeting.

“This isn’t what Swarthmore stands for. Though you, the Board, may not want to lend our support to the fossil fuel industry, this endorsement from the IPAA makes it clear that the board’s actions speak for us as an institution,” read Zhao. “No matter what other climate initiatives Swarthmore may attempt to undertake, by continuing to invest in fossil fuels, we are continuing to lend support to a rogue industry at war with everything Swarthmore stands for — Truth, Science, Dialogue, and Justice. We are delivering this award to you from the fossil fuel industry to highlight how the board’s decision directly lent Swarthmore’s prestige and social capital to a rogue industry that is responsible for millions of deaths every year.”

“We fully support students’ desire to express their views, and honor their right to do so. However, the Board did make its decision on divestment last May, coming to consensus after a very long and thoughtful discussion,” commented Spock in an email. “We are now committed to combating climate change by turning our sustainability goals into action on campus. Our hope is that we can now engage in meaningful, mutually respectful conversation about how the entire campus community can work together to combat climate change both by reaching carbon neutrality on campus as soon as possible, and by pushing forward with new initiatives of which we can all be proud.” According to Spock, the Board adopted a new “Sustainability Framework” during their meeting Saturday and discussed the groundwork for several new green initiatives that will be announced soon.

It was unclear whether or to what extent the Board could hear the MJ speakers through the closed doors of the Scheuer room. At one point, what was presumably a joke told in the Board meeting produced a round of chuckles that was audible over the MJ speakers. At the end of their prepared speech, the MJ members gave the ribbon and an extended copy of their prepared statement to Assistant to the President Gabe Schechter, who it was arranged would receive the MJ action outside the Board meeting.

“This action was a really exciting start to the school year,” O’Hanlon said. “We’re excited to keep building on the huge support that we have among students, faculty, and alumni this semester to demand that the Board put our institution on the right side of history.”

One thought on “Mountain Justice Protests Board, Citing Republication of Board Data by IPAA”