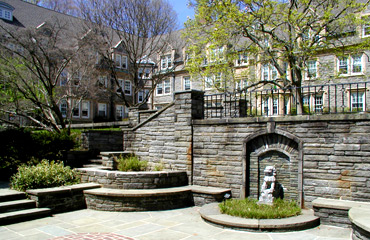 To the surprise of many, there is thunderous conversation among the somnolent denizens of Wharton Quint 287. To understand the world in all its treachery, one must spend an evening arguing in this quint. Swarthmore students would do well to take example. We join the pantheon of Socrates and the Athenian Court, Luther and the Church, Lincoln and Douglas. On the recommendation of my peers, I have prepared some of our more consequential debates for public consumption.

I. Goku vs. Shostakovich. My quintmate Muha Haque is an avid fan of Dragon Ball Z and makes frequent mention of Goku, his favorite character in the show. I talk with equal regularity about my favorite composer, Dmitri Shostakovich. Inevitably, we have come to loggerheads over who is more badass. On the one hand, Goku has supreme physical strength, while Shostakovich had a weak human frame. But where Shostakovich was weak of body, he was not of mind. Muha estimates that Shostakovich’s power level was less than 5, whereas Goku’s is in the billions; I contend that Shostakovich’s intellectual power level was in the trillions. His emotional power was likewise titanic: during the Siege of Leningrad, the composer’s Seventh Symphony inspired thousands of starving Russians to keep resisting the Nazis. Conductors fought over the right to premiere his work, and Shostakovich was famously featured on the cover of Time Magazine dressed as a firefighter amid a smoky inferno. But Goku has saved the universe from destruction — multiple times! Surely this outdoes any and all mortal heroics. Perhaps, but here we can apply the ontological argument: fantastic as Goku’s achievements are, he and his universe demonstrably do not exist. He saved nothing, and is inferior to those who do exist. Muha counters that, as Shostakovich is dead, he too does not exist, but Goku lives on in his millions of fans (though Shostakovich lives on in the concert halls). According to Muha, Goku also brought about the fall of the Soviet Union. Dragon Ball Z premiered as a TV show in 1989, and in that very year the Berlin Wall came tumbling down, with the whole of the evil empire just two years later! I have yet to recover from this stunning evidence of Goku’s badassery.

II. Hannah Montaigne. Speaking to one of my quintmates, I once mentioned the sixteenth century French essayist Michel de Montaigne. Coming in from another room, Muha exclaimed “Hannah Montana?!” Thus began the dispute: who is more famous — Montaigne or Hannah Montana? To address this question, we first needed to define “famous.” Is fame defined by the simple number of people who know of you at a given time? If we are counting the awareness only of living people, then Hannah Montana is certainly more famous, as the average person will know of her and not of Montaigne. But if we count fame among dead people, Montaigne has a five-century advantage over Hannah Montana. Furthermore, there are certain individuals in history whose awareness of you gives you extra fame points. Shakespeare and Descartes knew of and were influenced by Montaigne, but neither of them had ever heard of Hannah Montana. My roommates countered that, due to mass media and recent population growth, even with a five-century advantage, more total people today know of Hannah Montana than have ever known of Montaigne. Hannah Montana also gets fame points for being known to modern greats like Stephen Hawking and Yo-Yo Ma. And yet, every student writes an essay at one point or another; as Montaigne largely invented the modern essay, he is indirectly known by billions. In every late night stint, you may not know of Montaigne, but you know Montaigne. But every time someone says “nobody’s perfect,” which is common in our imperfect world, this is a reference to Hannah Montana’s hit “Nobody’s Perfect,” from which the phrase originated. In any case, if you tweak some definitions and keep a very, very open mind, Montaigne is more famous than Hannah Montana.

III. Chile vs. Chile. For the week that I was writing an essay about Pinochet I spoke often of the nation he governed. Soon arose the problem: is it pronounced Chile or Chili? I contend that it is Chile, as this is the correct pronunciation in Spanish. Saying Chile in English is not sufficiently awkward to justify Chili. My quintmates argue that in English it is in fact easier and more natural to say Chili. I disagree — I have met plenty of Americans, including my comparative politics professor, who say Chile with no difficulty. My friends investigated and found that said professor speaks Spanish and has actually lived in the country, and as such is not a representative data point. There is also an international relations advantage, I am told, to pronouncing the country Chili, as public approval will surely grow of a state so tasty. To resolve the issue, we duped people on our hall into saying the country’s name naturally with the question “What long, thin nation lies on the western shore of South America?” The majority said Chili. Angered, the minority took refuge on the Internet, where there is no truth. But even there, the evidence was mounting. We googled Chile vs. Chili and found a video of an American woman saying Chili. But just as I was about to concede, we found a BBC documentary in which a British man said Chile. In the interest of maintaining the special relationship, we dropped the whole argument.

Such is the 3 a.m. discourse that echoes through Quint 287. We hope to have shed light on some fluid issues of our day. In farewell, I leave you with a few of our unresolved disputes: should insects that inhabit dorm rooms pay rent for their lodging? Is flatulence inherently funny or is this a social construct? Is eating lunch an act of weakness?