This spring, Student Government launched its first annual Dorm Games. The Dorm Games are an ongoing campus event in which each dorm competes for points in order to win dorm T-shirts.

According to organizers Steve Sekula ‘17 and Sunness Jones ’16, the motivation behind organizing the event was to give Swarthmore students a low-commitment opportunity to have fun. Conscious of Swarthmore students’ busy schedules, the idea was to begin with minimally time-consuming events and work up to the events that are more involved later in the spring.

After kicking off the event with an Insomnia Cookies study break, the first official dorm game was Dorm Survivor Week, in which each dorm would simply cast their votes for an enemy dorm they would like to eliminate from the runnings, and whichever dorm survived longest won a certain number of points. Parrish — which was pooled with Kyle and Woolman — was the last survivor, winning 120 points. In total, more than 450 votes were cast for Dorm Survivor Week, which is more votes than StuGov usually gets for normal elections, according to Sekula.

After Dorm Survivor Week, the next activity was the photo scavenger hunt. Each dorm had three hours in which to get photos of themselves accomplishing certain tasks such as fitting seven residents in an elevator or brushing their teeth, or finding different places on campus, such as the Crum Woods or the Whispering Bench.

After the scavenger hunt, a bonus event was announced: the Design Challenge, in which each dorm had to design a coat of arms that would be judged on creativity, spirit, and best overall design. The winner of the Design Challenge was Stephanie Kestelman ’16, who won Danawell 50 points.

Though originally schedules for March 20th, the talent show is currently in the process of being rescheduled. The Smash Tournament will be this coming Sunday, March 29th at 6:30PM in Bond Hall.

Some participants in the events have felt that the Dorm Games were a good idea, but difficult to pull off. Karl Barkley ’15, one of the Dorm Games captains for Mertz, said, “I was kind of underwhelmed by the participation within Mertz, which was frustrating because the games seemed like they could have been a lot more fun if everyone got involved. Part of the participation problem was the weather during the scavenger hunt. As I understand, the weather also knocked out tug of war, which was an event I was looking forward to. Overall, the momentum we had going as a dorm has definitely waned since the first weeks of the games, especially after spring break.”

Hanyu Chwe ’16 felt similarly. “I love the idea of inter-dorm competition. I’ve always thought that Swarthmore would benefit from more friendly competition,” Chwe said. “Unfortunately, it doesn’t seem like the dorm games have been successful. Most students that I know hardly pay attention.”

“When I lived in AP, some other DK freshmen and I though an AP-DK sports contest would be awesome,” Chwe continued. “It might be better to nurture students’ own ideas for competition as opposed to imposing competition from the top-down. I’m sure the OSE would love it if students came up with more proposals. More localized competitions would probably have more participation and be logistically easier anyway.”

“I like the direction SGO’s going in. I think it’s exciting. I like that it’s all student-led and I’d like to maintain that on campus. I think that having events come from different sources is something that makes events better, because you have healthy competition. As students, we definitely know what would fit best into the lifestyle of the typical Swattie,” said Sekula.

Over the course of this year, Student Government has been expanding its brand so that it can be more accessible and engage more students. “I’m really into graphic design. I design the logo and the posters and I want to give it a clear brand, something that can be carried on when I leave,” said Sekula. “I want to institutionalize all that and give future generations something to work with, I think that’s really important.”

Ideally, Park hopes that the outreach from this year will encourage the student body to be more engaged when Student Government begins to embark on more serious initiatives next year.

Additionally, Student Government’s rebranding will hopefully get more students involved. “Getting the best people at Swarthmore involved in student government will mean that we have the best chance of getting things done. […] It’s great to get freshmen involved especially because they don’t already have a lot of commitments coming in like upperclassmen. They can spend a lot of time getting stuff done, which is really helpful,” said Sekula.

Currently the Dorm Game standings are: 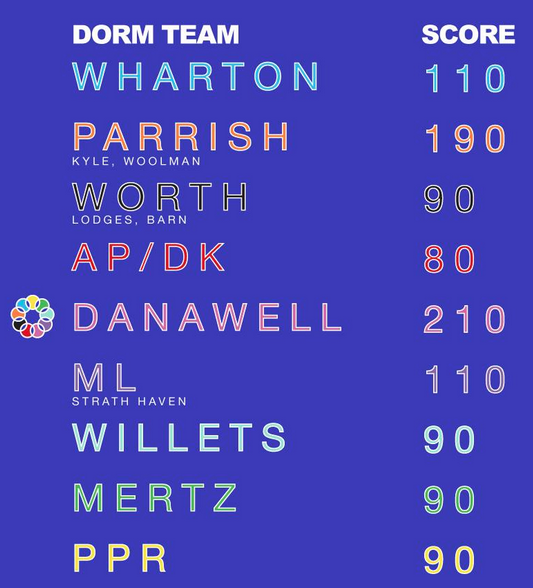