Ai Weiwei is an established contemporary Chinese artist and prominent social activist. His work often serves as social and political criticism, particularly of the Chinese government. He created @Large: Ai Weiwei on Alcatraz from his studio in Beijing while under house arrest. His work is controversial, provocative, and moving. @Large: Ai Weiwei on Alcatraz consists of 7 sculpture, sound, and mixed-media works at 4 locations on Alcatraz. Ai Weiwei uses Alcatraz’s past as a military fortress and penitentiary, and its current status as a national park and iconic historic site to explore issues of human rights and freedom of expression.

While prisoners on Alcatraz were given the proper food, clothes, and medical attention, any other activity was a privilege and had to be earned, including work. This two story 306 feet long building had a dry cleaning plant, brush factory, office, clothing factory and furniture plant for the prisoners to work for money. Three of the seven installations, With Wind, Trace, and Refraction, are in the New Industries Building. 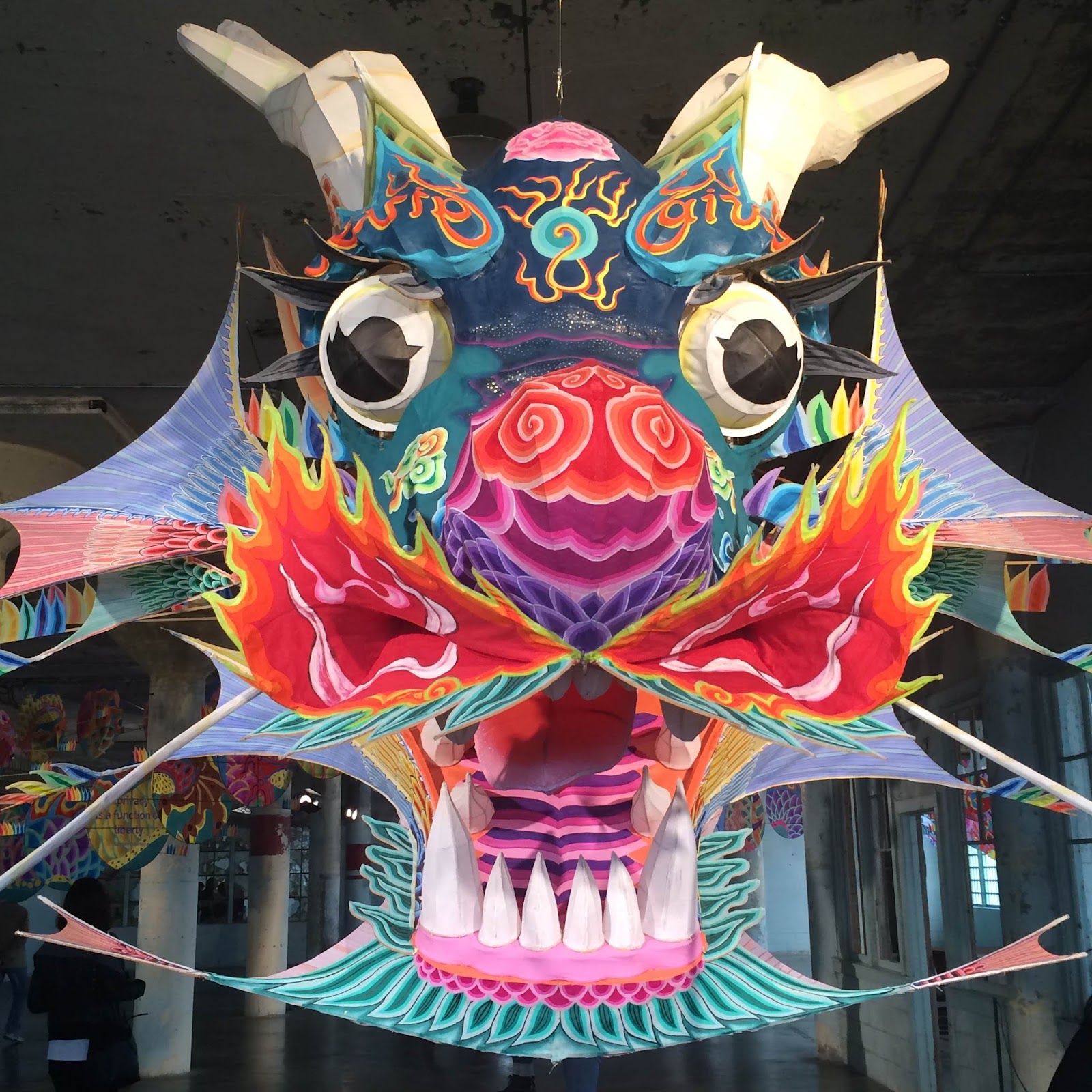 Inspired by traditional Chinese kites, Ai WeiWei worked with Chinese artisans to produce these handmade kites. After walking up the long incline from where the ferry drops you off and turning left into the entrance, you immediately come face to face with the head of a dragon.

The colorfully painted paper, pulled taut over the thin bamboo, creates a bold yet delicate structure–its gaping mouth and vibrant colors surprise you after seeing the drab buildings of Alcatraz.

Walking around the room, the rest of the dragon is composed of circular panels, some with quotes on them. Across the building are other smaller kites, stylized with birds and flowers, that represent nations that have a history of violating human and civil rights.

By suspending these pieces on a variety of planes and angles, Ai Weiwei deconstructs the rigid space in the building. He invokes the imagery of flight through the use of birds and kites trapped mid-flight in a rusty building formerly used for prison labor. The artist establishes the powerful contrast between freedom and confinement, creativity, and repression — themes that resonate throughout the rest of the exhibition. 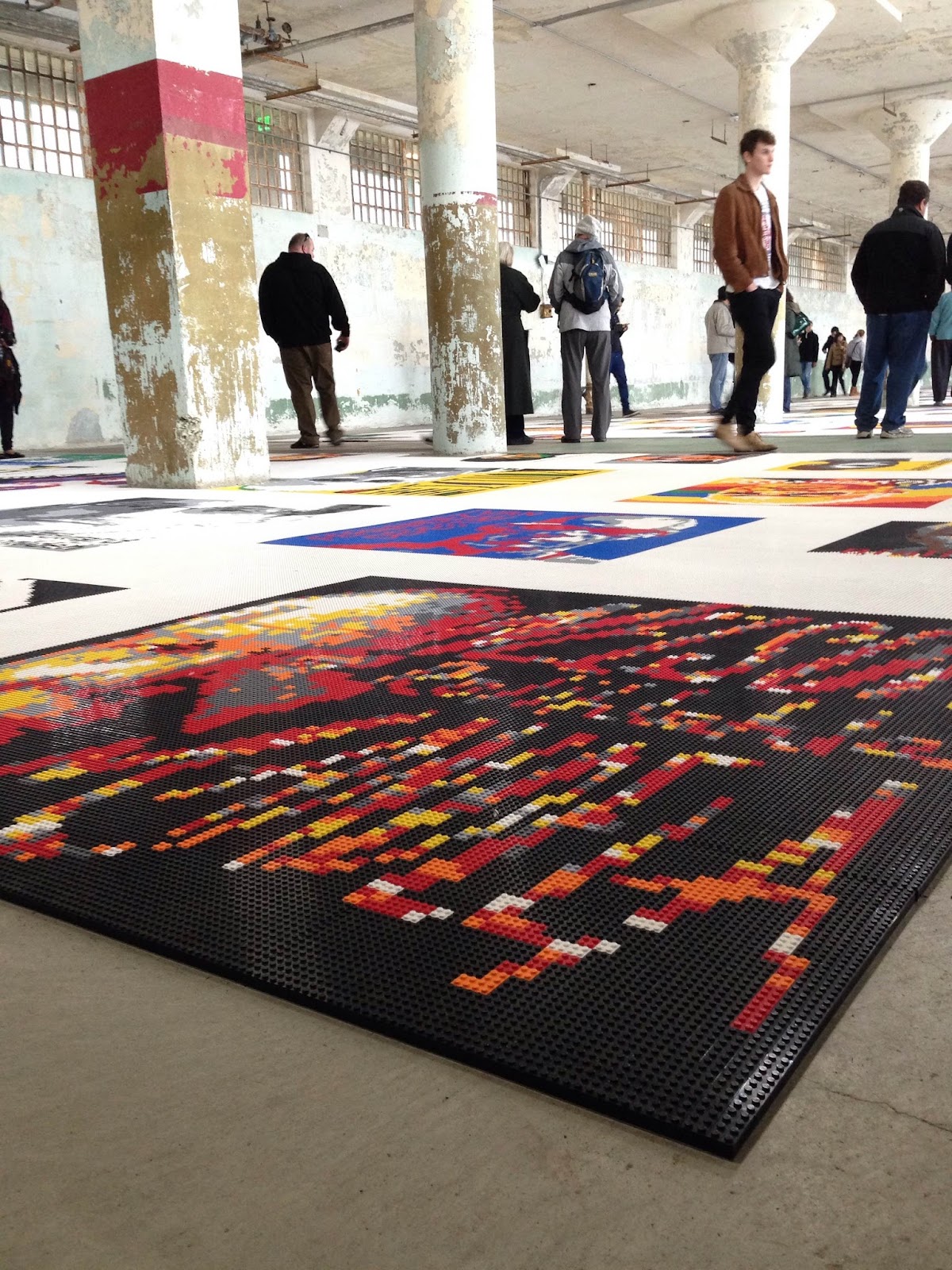 In contrast to With Wind’s metaphorical stance toward creative repression and political detainment, Trace presents the viewer with the global reality of this issue. The installation consists of portraits of 176 individuals from around the world who have been targeted by their governments for their beliefs. Ai Weiwei chose these individuals, whom he calls the “heroes of our time,” based on research from human rights organizations like Amnesty International and independent research.

Constructed using more than 1 million lego bricks and organized into 6 zones, a visitor can flip through binders to learn more about each individual. The use of such a playful medium to approach such a serious topic allows the viewer to see the sheer number of legos that contribute to the work, bringing to mind the relationship between the individual and the whole.

Visitors can view the installation on the ground floor as well as the gun gallery, where armed guards once watched over the prisoners. Following the footsteps of a guard and taking the position of authority, you quietly watch the other visitors and the 176 portraits of the individuals from an elevated position, as if they were actual prisoners. 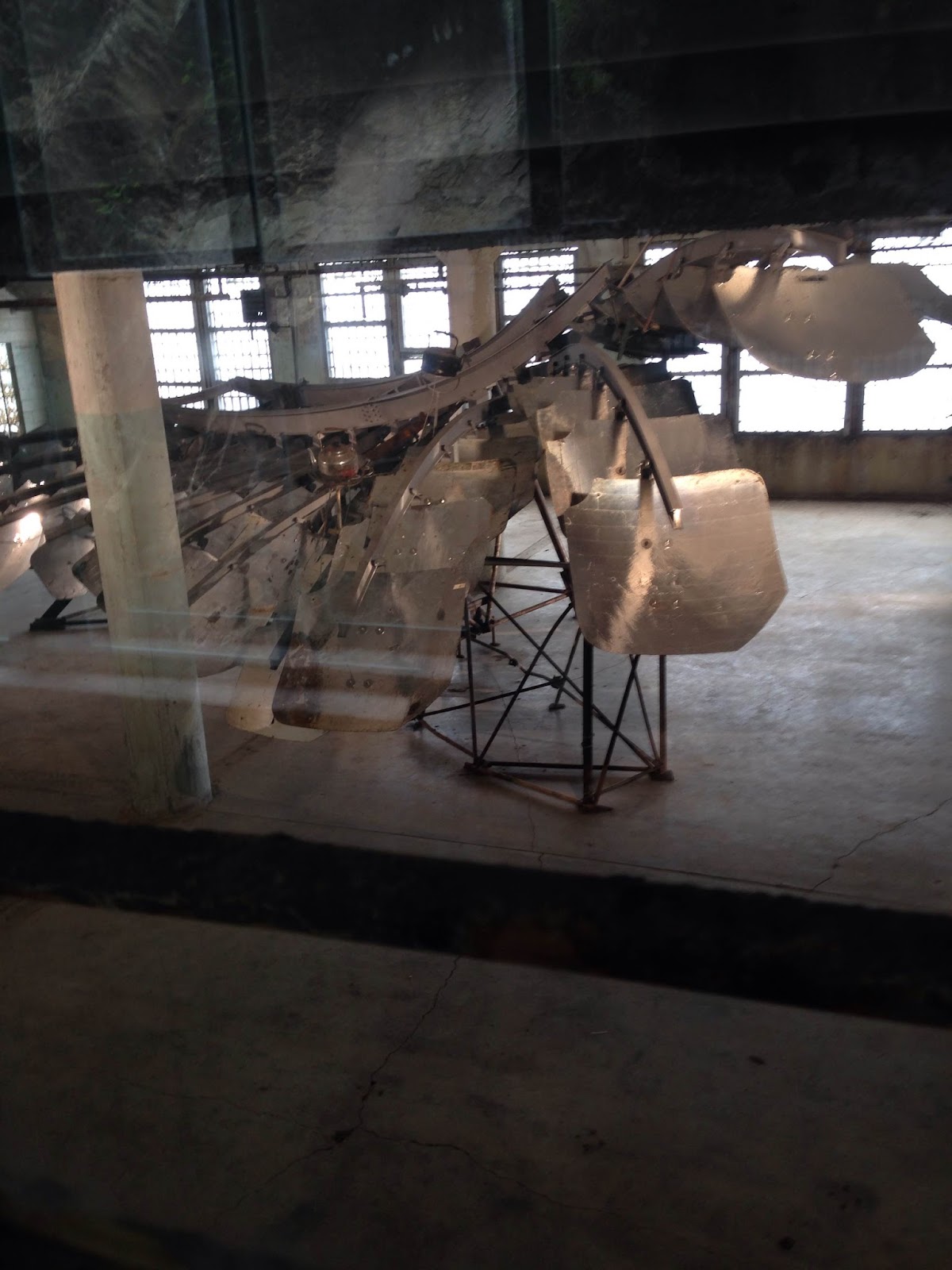 Continuing along the small hallway of the gun gallery, you peep through the rusty and broken glass to view Refraction. Ai Weiwei uses solar cookers from Tibet as the “feathers” of a zoomed in section of a bird’s wing, connecting the theme of flight from With Wind to the theme of the individual versus the whole from Trace.

Weighing more than 5 tons, this installation is lower on the floor compared to With Wind. Yet the curvature of the “wing” of this bird suggests a slow mustering of energy, a struggle to take flight. While visitors are situated in the gun gallery, a place of control and power, the narrow and cramped hallway creates a sense of entrapment, allowing visitors to further explore both the complexities of power in the context of the exhibition and the layered history of Alcatraz. 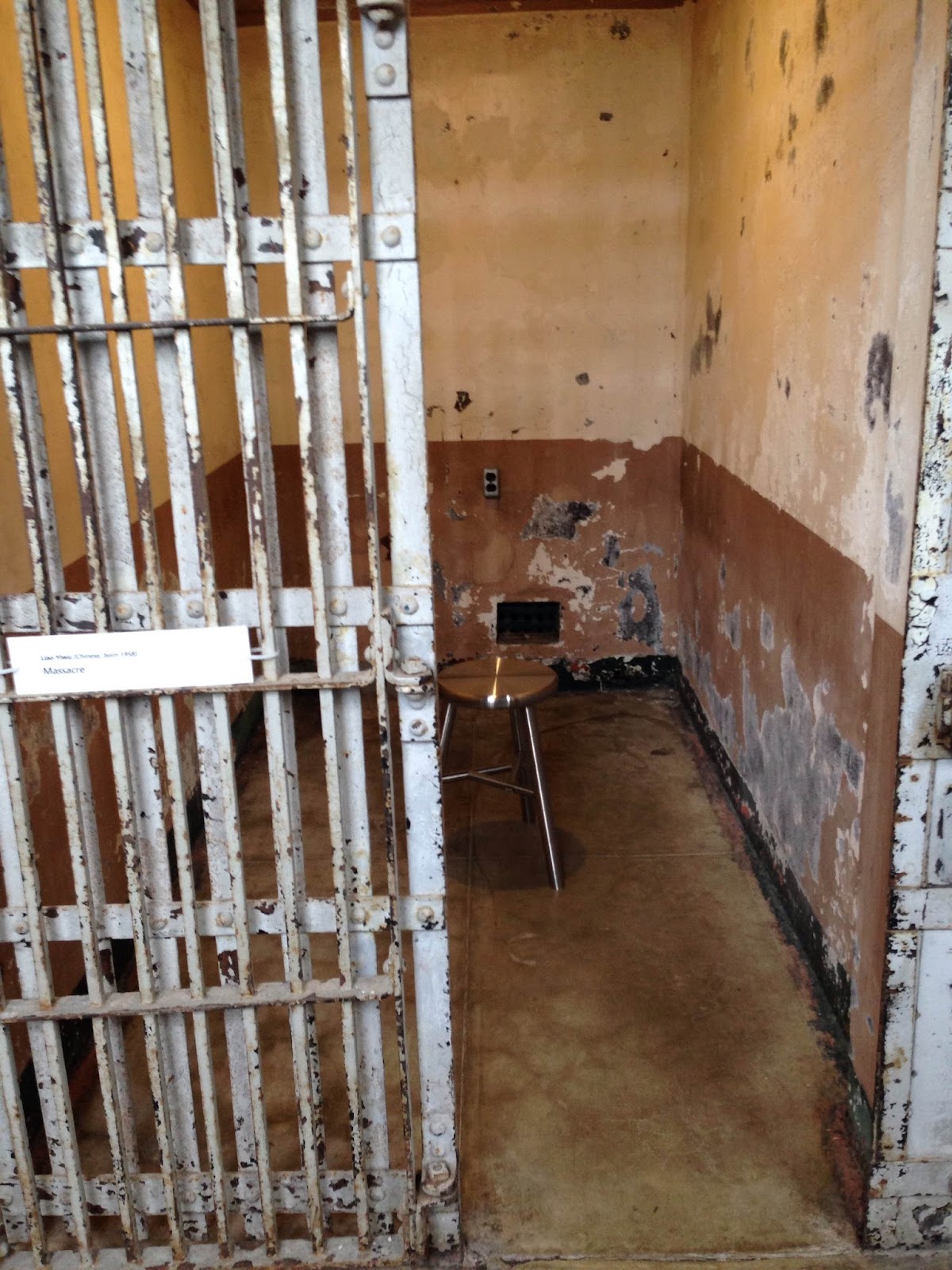 Stay Tuned consists of sound installations in each of the twelve cells on A block, one section of the cellhouse. While Trace allowed the viewer to visually see the individuals affected by political repression, Stay Tuned stimulates the viewer on an auditory level.

Within each cell is a brand-spanking new steel stool, contrasted with the remnants of words scratched into the chipped paint by past inmates. Polished, cold, and heavy, the stools are the only physical item in each cell from the exhibition. However, you are surrounded by the voices of the individuals, each detained and faced with criminal charges for the expression of his or her beliefs.

Ai Weiwei describes the texture of the human voice as a powerful medium for human connection. This sound installation allows the visitor to connect with the individual on a deeper level, despite the lack of anything visual or physical.

In each cell, the singing and speech contrast powerfully with the isolated cells and enforced silence of confinement. They mock and challenge the those who repress their very voices. 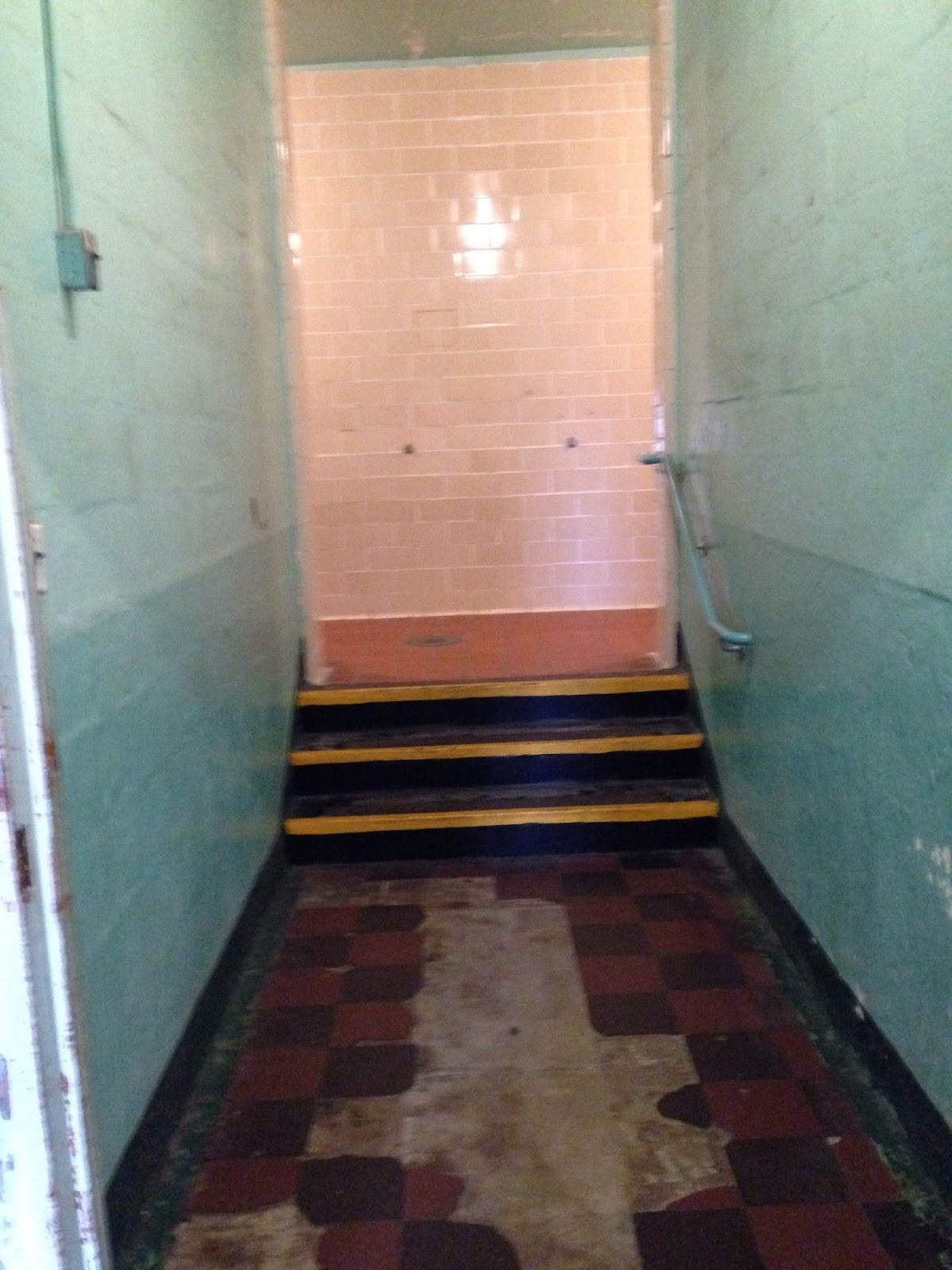 Walking into the hospital, you see signs warning visitors not to touch the paint, as it contains traces of lead. Illumination takes place in two psychiatric observation rooms, called “bug rooms” or “bug cages” by inmates. Leading up to the two small rooms is a small narrow hallway. There is a certain unsettlingly nature of the tiled rooms and connecting hallways. Similar to Stay Tuned, there is nothing in the two rooms except sounds of Tibetan and Native American chanting. The Tibetan chant is in honor of the protectress of Tibet, Palden Lhamo. The Native American chant, from the Hopi tribe, is to the music of the Eagle Dance, in which the healing powers of the bird is evoked. This continues the theme of birds and freedom in Ai Weiwei’s exhibition. In the 19th century, the Hopi men were some of the first prisoners of conscience held at Alcatraz for refusing to send their children to government boarding schools. Ai Weiwei draws parallels between the subjugation and loss of cultural identity of the Tibetan people and the Native Americans.

In the dark tiled chambers, the only source of light comes from the tiled glass, obscuring the view of the outside world. Standing in a room full of strangers, visitors can’t help but imagine the Tibetan monks, Hopi tribe members, and past inmates sharing the same chamber as them. Creating a layered, multi-temporal space, this installation invokes the past presence of the inmates and the auditory presence of the Tibetan and Hopi people. 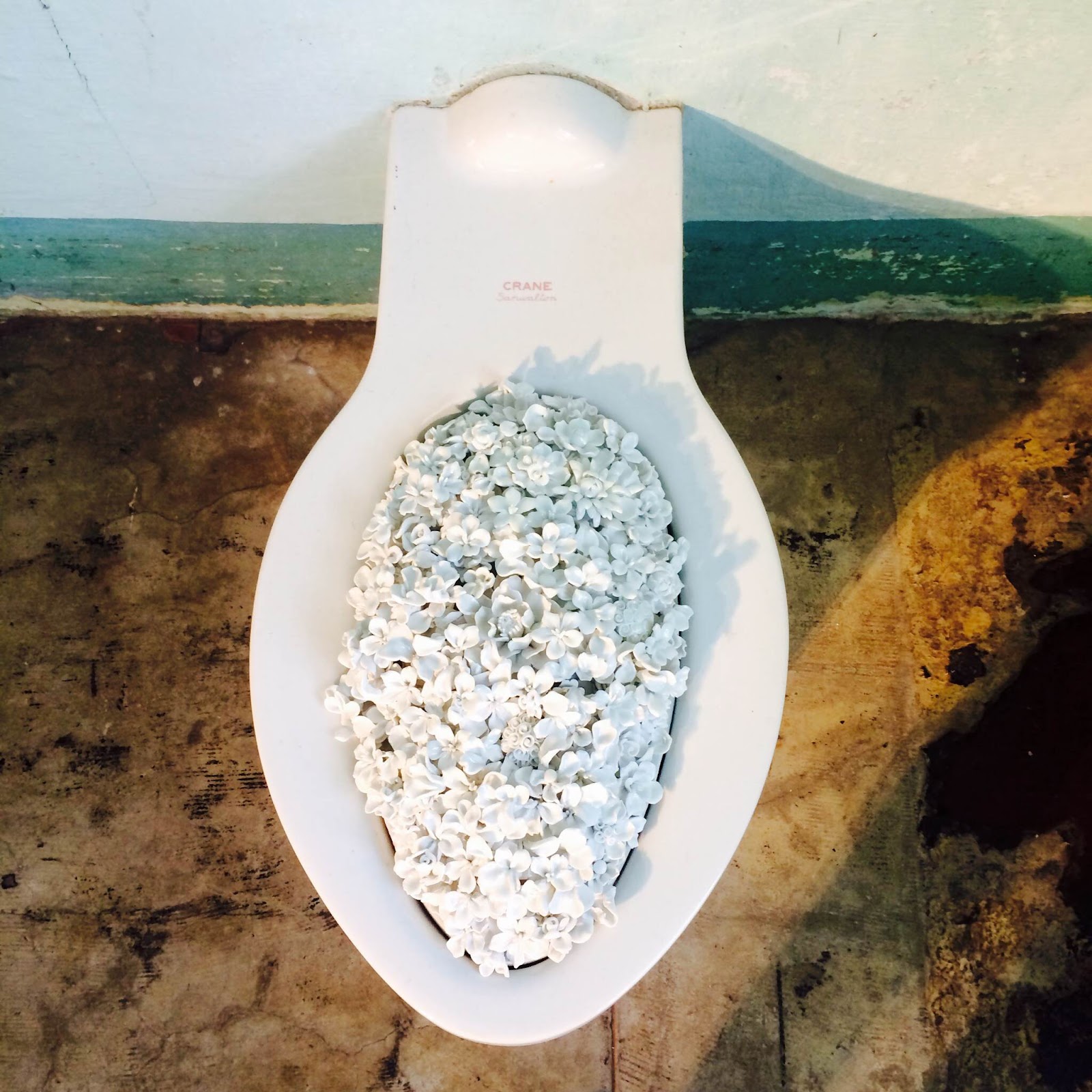 As in With Wind, Ai Weiwei draws upon Chinese traditional for the porcelain pieces in Blossom. The tubs, sinks, and toilets lose their original use and become vessels to hold porcelain flowers. Ai Weiwei’s father, Ai Qing, was a famous poet who spent twenty years of reeducation cleaning toilets. The intricate design of flowers placed in a variety of these fixtures is comparable to bringing a bouquet to comfort and honor the hospitalized and imprisoned.

Blossom is also a reference to the 1956 Hundred Flowers Campaign in China, in which the Communist Party of China encouraged its citizens to voice their opinion of the communist regime. Those who voiced dissent were immediately punished following this brief period of tolerance. 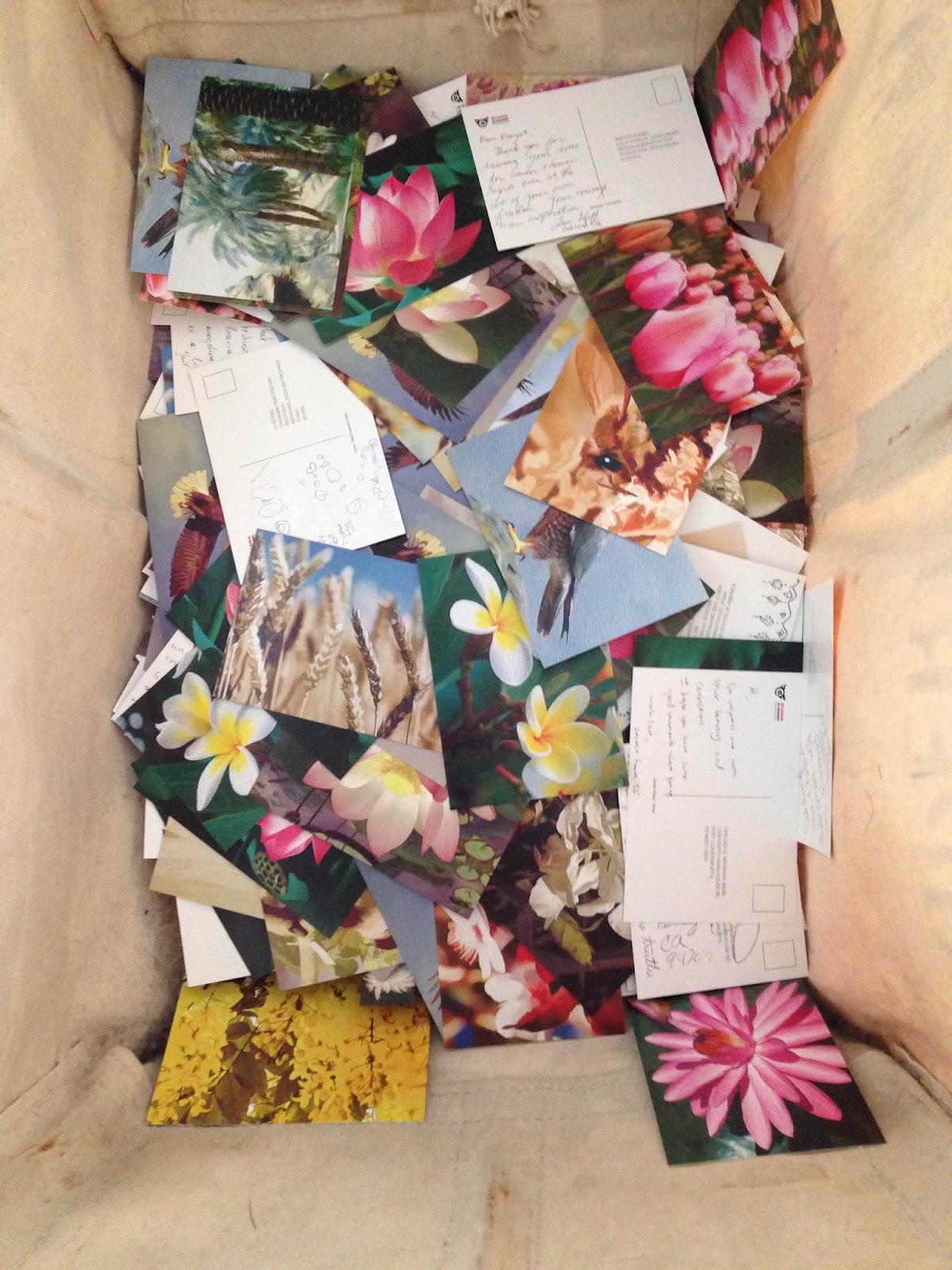 Unlike other installations that focused on increasing the visitor’s awareness and understanding of the prisoners of conscience from around the world, Yours Truly calls upon the visitor to reach out directly and write postcards to individual prisoners. Prepaid and pre-addressed, postcards have images associated with the nations where the prisoners are held.

Ai Weiwei expands the issue of repression and freedom to include the audience. @Large: Ai Weiwei on Alcatraz compels visitors to consider their responsibilities as members of a global community and the importance of using their voices for social change.