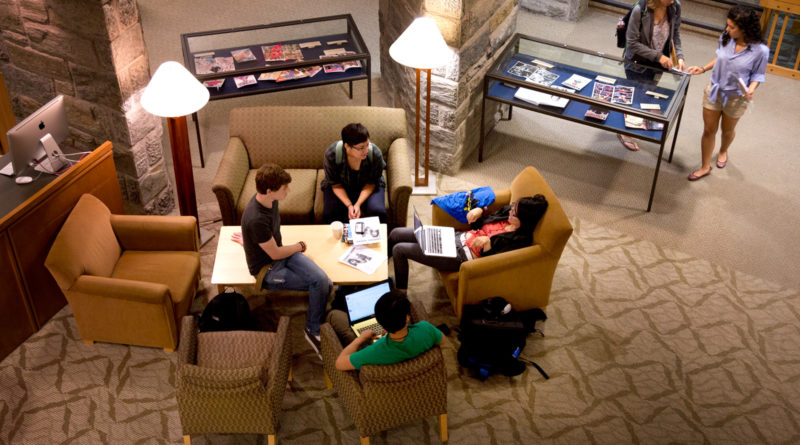 As Louis Kahn put it, “You shouldn’t be forced to put people through the library. It should be just something in its structure which says, ‘What a wonderful place to go,’ and of course, the location has much to do with it, and its convenience has much to do with it, but essentially, it is its nature which you are after to convey. Glare is bad in the library; wall space is important. Little spaces where you can adjourn with a book are tremendously important. So you might say that the world is put before you through the books.”

McCabe Library is a place where I used to study every day. I went there, I have decided in hindsight, simply because of its gifted title, “library.” I did not go there because it is a beautiful or inspiring place to work. I went there because I felt that I was supposed to be there. If you’re stressed and need to get things done, go to the library, my conscience told me, as I am sure that countless college students have told themselves.

It was as if the library was to schoolwork as church is to worship. And so I found myself, alongside many other students, habitually oppressed by what really is an unfortunate building.

The building stands atop the main campus hill like a medieval military barracks. It has windows large enough only to be arrow slits, and stone walls thick enough to withstand cannon-fire. It is a fort, not a library, the interior feeling more stifling than open. Natural light and views of the outside are luxuries never quite realized.

There are glimpses of trees and sky through the barracks windows, but odd placement or non-existence often muddles any opportunities for relaxing by a large and light-filled window. In fact, the one large window that might have achieved this faces west, meaning a low and unforgiving sun renders it almost completely unusable in the late afternoon, the most popular time to work.

Students are left only with carrels arranged along the exterior walls, probably according to a logic of space efficiency, but without consideration of window placement. They feel a little like airplane seats: you can always see out a window, but it’s never in the right place.

Thus, for the most part, there is no natural light inside McCabe. A dim yellow light illuminates the space instead, a light that is warm enough to make you sleepy, but uncomfortable enough to keep you awake. It is an anxious light.

The organization of these poorly lit and anxious spaces, too, follows a backwards logic. Large open areas posing as collaborative or interactive spaces are positioned so that if any hope to use them as such, they will transgress apparent quiet-study policies. Not only are they placed on floors designated as “quiet,” they are open to the entire floor so that student voices can be heard throughout. Even if someone finds repose in the silence of the library, despite its spatial shortcomings, the simple arrangement of the building might even deny that.

McCabe library, instead of fulfilling that inspiring form of Kahn’s “library,” stifles it. But it is the library nonetheless, and therefore bears this responsibility. The school must reimagine the building as the celebration of inspired students and not the defense of precious books, where the books are that which inspires and not that which must be defended. There must be more natural light and access to views of the outside, more programmatically specific spaces that are collaborative, intimate, completely silent, or altogether social, more seating that isn’t altogether depressing, and it needs a place for reading! (What kind of library doesn’t have a reading room?) McCabe needs to become a place where students study because it makes them feel inspired, or calm, or creative, not because they feel guilty if they don’t. Students should think, like Kahn imagined, “what a wonderful place to go.” Maybe then it can rightfully fulfill its reputation as a place of wor[k]ship.