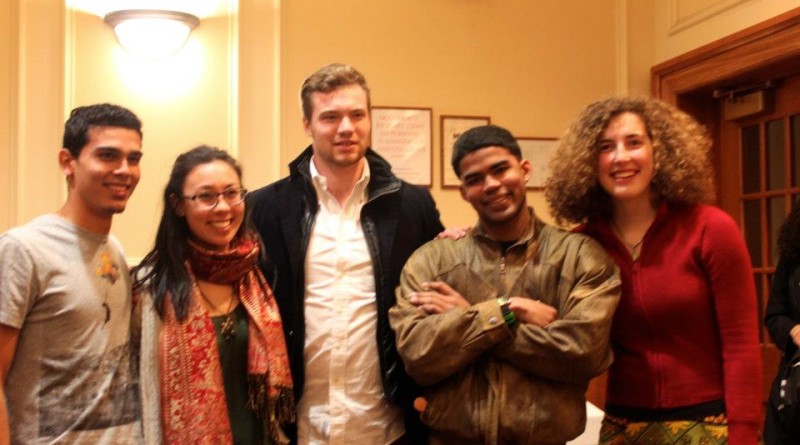 The Swarthmore team, the five winners of a slam in December, prepared relentlessly for four months leading up to the weekend, rehearsing first once a week and then every night. Vision, a slam poet and one of the leaders of PYPM (Philadelphia Youth Poetry Movement) served as an unofficial coach, helping the team with strategy. All the work paid off: the Swarthmore team won their first preliminary bout (a round of poems), came in second place in the second bout, and qualified for semifinals where they came in third.

For the poets, however, the value of CUPSI was not derived from the judges. In Quiñones’ words, “It’s not about the scores, it’s about telling your story.” Beyond the competition, the poets had the chance to meet poets from colleges around the country and to hear their work. “It was honestly and truly one of the most beautiful experiences of my whole life,” said Randall.

The team arrived on April 3 and within hours was competing against University of Texas at Austin, Rowan University, and University of California, Santa Cruz. As no poem could be performed twice in the competition, the strategy behind selecting pieces was key. The poets went in with ideas, but totally changed their plan based on the mood in the room, what the other teams were performing, and how the judges responded. The four poems performed that earned the team first place were Randall’s “Old Spice Man”, Englehart’s “Preacher’s Daughter,” Randall, Quiñones, and Anderson’s “Brochure” and Wunrow’s “Harbinger.”

At the end of the bout, the judges mixed up the scores and announced UT Austin as the winner and Swarthmore as second place. “Before I could even stand up, the coach from UT Austin came over and said those scores are wrong, let’s go fix this,” explained Quiñones. UT Austin ended up winning the Spirit of the Slam award. “I love them, they’re such wonderful people.” Wunrow said.

On the second day, the bout was Swarthmore vs. State University of New York at New Paltz vs. Harvard vs. Dickinson. The team came in second, but narrowly. Harvard began the bout with poems about gender identity, setting the mood with a topic that the Swarthmore team did not address in any pieces. They opened with Anderson’s “Self-portrait of an Egoist,” then adjusted the tone with Wunrow and Englehart’s “Mom.” Next, Quiñones received a high score from “Stage Etc.,” and finally Randall closed with “Open Letter to An Abercrombie Sales Associate.”

Performing was nerve-wracking for the poets, but also incredibly exhilarating. “It’s the most difficult thing in the world until you start speaking, and then it’s the easiest,” Englehart said. For Wunrow, the poet-audience interaction of slam poetry made all the difference: “If you have a responsive audience, it feels like you’re speaking to people personally rather than from a stage, which is a beautiful feeling.” Quiñones quoted a teammate to describe the sensation: “As Taryn said, ‘I felt all the things.’ That is a funny but accurate way of putting it.”

After placing second in the second bout, the team was not sure if they had made it to semifinals. “It was a sobering thought: four months of work and it is over, just like that,” Randall said. But good news came: “We were all just sitting in our room nervously,” said Anderson, “and then we found out while we were on the phone with one of the OASIS leaders from home [Javier Perez ’13].” The team’s reaction to the news prompted a noise complaint in the hostel where they were staying: “We were all so excited, jumping around the room and generally freaking out,” Anderson said. Englehart also noted that moment as a highlight of the experience: “I think we realized in that room that we really did make a great team, and that we were good, and that we had a chance at advancing.”

In semifinals, Swarthmore competed against Brooklyn College, University of North Carolina at Chapel Hill, the University of Connecticut, and the University of Pennsylvania.  Some members of the team said that the numerical scoring did not feel compatible with the way they conceptualized their art. The judges “held up numbers as reaction barometers to their own feelings, whatever they were. This, to me, is not how to judge a piece of art,” said Anderson. Wunrow echoed this sentiment: “Most of the judges were pulled from the audience, which meant some of the scoring was a bit unprofessional, but giving that frustration priority would mean missing out on so many of the beautiful moments and interactions with other poets which made CUPSI a magical experience.”

Judges aside, semifinals gave the team a larger audience and lots of recognition. Giants of the slam poetry world including Alicia Harris, Joshua Bennet, and Jared Singer sat in the crowd: “We were competing in front of people we watch on Youtube,” said Randall.

Swarthmore opened with Wunrow’s “Broke,” then had Anderson’s “Open Facebook.” Quiñones went next with “El Cantante,” a persona piece that received a standing ovation, and Randall closed with “Valentina.” The team came in third in the round. “We are one of the top ten teams in the nation and that is something that should be recognized and something that should keep living on,” Quiñones said. “As Vision said, no regrets. You go, you let it all out, and you know that even if you don’t make it to semifinals or finals, you know you left something on the stage.”

Danielle Delpéche ’15, a member of OASIS, was in the audience filming the poets compete. “I feel so proud that we were being represented by this group of people,” she said. Delpéche was glad she could capture the performances for students back on campus: “Voices needed to be heard.”

In Quiñones’ words, “Swarthmore is now known for slam poetry.”