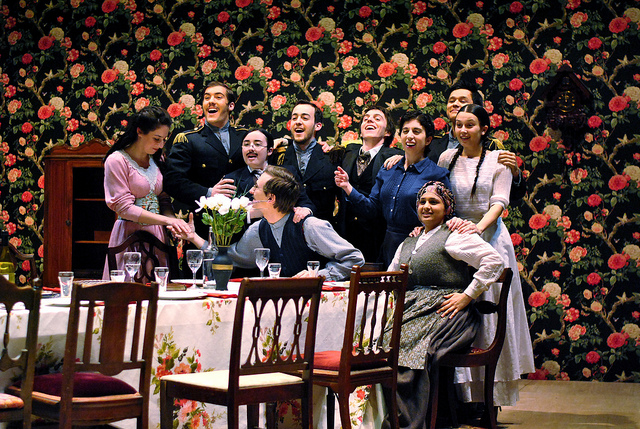 Anton Chekhov’s Three Sisters is set in “The Prozorov house and grounds in a provincial Russian town.”

We are constantly being told by Vershinin (Mark Levine-Weinberg ’14) that life will be infinitely beautiful in just 200 or 300 years, while Tuzenbach (Tyler Elliott ’15) persuades us that life will always be hard and we’ll always be afraid to die. The doctor Chebutykin (Nathan Siegel ’15) perpetually asks us, “what difference does it make?”

The slate the Production Ensemble team was given to work with seems bare on the surface — these dichotomies presented by the text seem contradictory at the most complicated. However, the ways in which Production Ensemble’s acting, directing and tech scratch the surface reveal the piece’s inner complexities. What they find is disorderly and without one clear-cut explanation. They invite the audience to explore their struggle to grapple with it, forcing viewers to decide for themselves whether “it” makes any difference.

Because of its depth, the play can be cast in different lights depending on interpretation. “That play in particular has great potential,” said Brian Johnson, visiting assistant Russian professor and dramaturge for the show. “It’s open to so many ways of staging it.”

Director and Visiting Assistant Professor of Acting Richard Hamburger recognized the potential for multiple interpretations, throwing those nuances into relief in the show. Hamburger, a guest artist who also taught Acting I at Swarthmore last semester, has directed Chekhov’s three other plays in the past. “In a sense, Three Sisters is the darkest,” he said.

That darkness certainly comes out in the play’s climactic moments. Irina Sergeyevna, played by Casey Ferrara ’14, is the youngest sister who comes to an existential crisis when she realizes her hopes of escaping the provinces to Moscow are fruitless. She falls into a crushing despair during one of the performance’s most heightened moments. The success of this moment, and Ferrara’s acting throughout, is in the subtle way she blends the traditional text with a modernist, almost raw emotion. The scene took Chekhov’s hyper-realism and dramatized it in a modern context.

As the show’s dramaturge, Johnson attempted to add some of that context. He explained to the actors the nature of Chekhov’s realism. “[His plays] attempt a degree of naturalism which had never been staged before, and the emergence of Moscow Art Theater facilitated this experiment with naturalism,” Johnson said. “And succeeded to such an extent that it’s hard to stage Chekhov today because of our perspective of Chekov as locked into naturalism.”

Michelle Johnson ’16, who plays Maria Sergeyevna, said that when she first saw a production of Three Sisters she hated it. She said that working on the piece in Production Ensemble had introduced her to Chekhov’s ideas in a different way. “It brought more the intention of Chekhov and what he was doing,” she said. “It highlighted the fact that what he was doing was rally unique, not many other playwrights have created such a naturalistic style of writing before.”

Production Ensemble’s show could not be further from the “museum piece” that Johnson said often results from stripping the humor from Chekhov’s plays. Hamburger’s direction and the lively cast animate the stage. The characters are always moving, creating a dynamism onstage that doesn’t seem forced.

The play is also deeply rooted in history and the social context of turn of the century Russia. In the years leading up to the Revolution in 1917, the aristocracy saw their former power slipping away. The trope of the desire to work is huge within the play, and the three sisters (Irina, Maria, and Olga, played by Maddie Charne ’14) idealize that work in a Romanticized nouveau industrial society. As they navigate society as women and as people, the play highlights these struggles of loss of control in society at large, as well as within the family.

“For me the play is about who’s going to inherit Russia, and the family becomes the nation in a sense,” Hamburger said. This struggle is inherent in many of the class, gender and personal tensions throughout the piece. “In the play, there’s not really a winner,” Michelle Johnson said.

Alongside the darkness and humor is an unspeakable struggle to get out – out of the province, out of the house, even just to get out the words you mean to say. While this could be read with an existentialist No Exit lens, this production imbues it with the cast’s youthfulness and hope. Irina, who celebrates her twentieth birthday in Act I, is clad in a child’s white dress. The characters’ emotions are immature and impulsive. “[Hamburger] is encouraging us to be younger, spontaneous, selfish, to bring life to the words in that way,” Michelle Johnson said. “It really connected to me as a young adult just starting that transition and trying to find your place and what you want for your future.”

Michelle Johnson said she has enjoyed playing this spontaneous, youthful aspect of Maria’s character. “I just love that kind of emotion and passion, how free she feels to show how she’s feeling on the inside,” she said.

This tension is prevalent in the difference ways each character represents themselves to society, their family, and themselves. Chebutykin is seen as a benign old doctor, but Siegel plays his emotional turnover as the most intense moment in the play.

“The characters are really complex and well-formed, but you have to search a little bit and really see where that character fits within the whole,” Michelle Johnson said.

While the audience is left to grapple with these themes at the end of the play, even the intended tone is up for them to decide. The production complicates a seemingly dichotomous question of optimism vs. pessimism, whether “it” will make a difference.

Michelle Johnson articulated this tension between dark and light in the play: “Since it inherently has a lot of tragic aspects, we’ve been searching for lighter more hopeful parts, but tragedy is still there so really depends how audience members connect to it,” she said.

Hamburger takes a more positive view. He said that as they gain more self-awareness and grow, “the three sisters can lean on each other and work towards helping other people out . . . yes they’ve lost loved ones, but may end up being more mature and see more clearly now.” According to Hamburger, the play says that we must grapple with the present, and that it does make a difference in the end.

“The play constantly challenging us to be in present moment,” Hamburger said.

Three Sisters will take place in the Lang Performing Arts Center (LPAC) Pearson Hall Theater on April 5 and 6 at 8 p.m. and April 6 and 7 at 2 p.m.