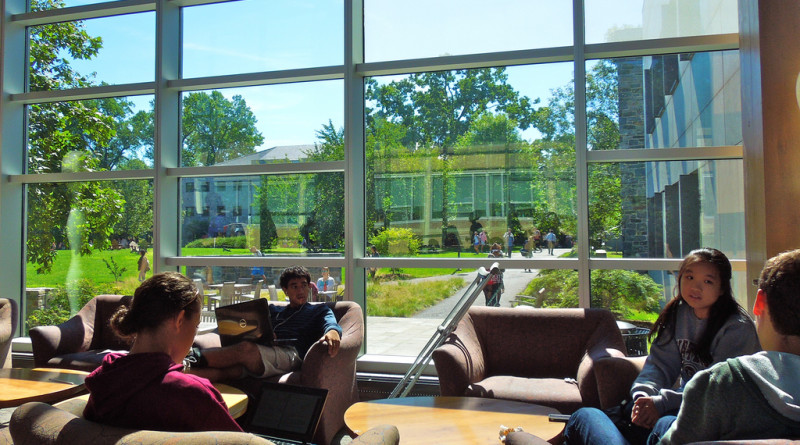 A new political science discussion group is offering a different perspective for students and for the group’s faculty advisor Ben Berger, associate professor of political science. Last semester, several students decided to do something about what they felt to be a lack of diverse ideological perspectives in Swarthmore’s social science curriculum. Now, the group is a reality and focuses on conservative, classical liberal, and libertarian thinkers.

When approached in the fall by Danielle Charette ‘14 and Tyler Becker ‘14, Berger was intrigued by the group’s representation of this minority perspective on Swarthmore’s campus. “I haven’t liked the uniformity of thought in higher education in general, not just at Swarthmore,” Berger said. He sees the group as an opportunity for students to read material they would not necessarily be exposed to in core courses at Swarthmore, and for students to develop and hone their personal ideologies in a safe space.

For Zoe Wray ‘16, who identifies as a libertarian, the group is a place where she can openly discuss some of her political beliefs. This is not something she has always felt she can do at Swarthmore. “I had a pretty bad experience at the diversity workshop during orientation week, where we were talking about definitions of words and it got into a political argument. I didn’t feel the facilitators really acted as neutral moderators, and it got kind of uncomfortable,” Wray said.

Berger says this is a common phenomenon at institutions like Swarthmore. He believes intellectual diversity is healthy, yet, he says, conservatives and libertarians often see the academy as an inhospitable place and many opt out of academia in favor of fields like business or law. “We like intellectual diversity in theory,” Berger said, “but when push comes to shove, you want to eat lunch with someone who thinks like you—it’s a natural human attitude.”

Counter to this pattern, Berger leads the discussion group although he is not himself a conservative. He says he enjoys teaching the material and values the much-needed ideological variety it brings, and would be interested in trying to implement a full-credit course based on the readings done in the group.

As of now, about ten students are taking the discussion group for half an academic credit, and those students are responsible for leading certain discussions and taking leadership roles in the group. Despite his interest in potentially working the material into Swarthmore’s course offerings, Berger says the conversations in this group are often more substantive and productive than in a normal class, partially because everyone is there by choice.

“Even though there are differences in ideology,” Berger said, “they’re not arguing. Especially because people care about these issues, I thought things might have gotten personal, but that really has not happened.”

Wray also said she appreciates that these differences in ideology exist within the group. Most students are not members of Swarthmore Conservatives and are politically “all over the place,” Wray said. She particularly appreciates the group members who lean left, but are reading and thinking about different perspectives.

“Even if someone doesn’t walk away at the end of the day embracing everything they’ve read, they’ll be better able to flesh out their own ideology,” she said.

The group meets on Tuesdays at 8 p.m. and is open to any student interested in getting involved.