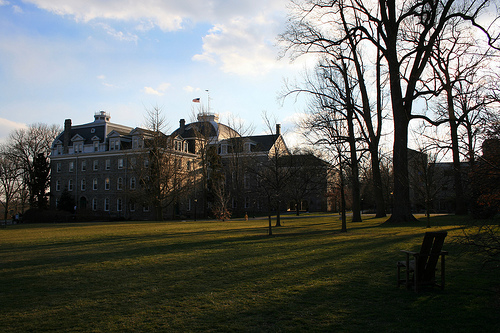 Peripateo, a new Christian discourse journal, is currently in the stages of developing and collecting content for their inaugural issue, slated to be released this spring.  The journal, whose title comes from a Greek verb meaning “to make one’s way,” “progress,” or “to walk around in,” aims to “see where faith is intersecting with or even informing the ways students are living their lives on campus,” Editor-in-Chief Hana Lehmann ’13 said. Peripateo will include a range of submissions including poetry, short fiction, personal reflection pieces, photography, academic articles, and essays.

The idea of creating a Christian discourse journal at Swarthmore came about when Lehmann read one such journal from Williams College, called The Williams Telos. When she mentioned the idea of creating a Swarthmore publication to fellow students, excitement began to build. “I realized that maybe we should do this, maybe we have the spirit, maybe we have the spunk and the excitement around this,” Lehmann said.

Interested students attended a conference in Boston, which provided resources to help Christian discourse journals get started at college campuses. From there, an editorial staff assembled and proposed a student-directed reading. This semester, advised by religion professor Mark Wallace, the nine students behind Peripateo meet weekly in a student-run directed reading called “Religion, Culture, and Discourse.”

Design Coordinator Yared Portillo ’15 said that she hopes that Peripateo will provide a discourse on faith that has been missing in the Swarthmore community. “Our faith is sometimes not given the level of importance that we recognize it to have,” she said. “We are trying to use this journal as a space to reflect on why our faith is important and why our faith is relevant—not just something you grew up with, not just something that is.”

Poetry Editor Nate Lo ’13 also spoke of the journal as a response. “I think that often the perception of Christianity is that it can’t be intellectual, or you can’t have discussions, or people who believe in it are hokey,” he said. “We want to speak to that. There are intellectual things to be said and it does have relevance beyond the church or chapel or meetinghouse.”

Lo hopes that submissions to Peripateo will examine faith in new ways. “A lot of language that you see in conversations […] about Christianity [is] kind of used or old or you hear the same arguments again and again from both sides,” Lo said. He wants to find writing that engages in “twisting and reinventing tropes of Christianity that you might see in literature.”

At the moment, everyone on the editorial board of Peripateo is a member of the Swarthmore Christian Fellowship (SCF), a multidenominational group that is a branch of the international evangelical organization InterVarsiy IV.

Students unaffiliated with SCF have proposed submissions for this year’s edition of Peripateo, and the Peripateo board hopes include “members of the wider Swarthmore Christian community” on future editorial boards, Portillo said.

In the weekly directed reading, the staff of Peripateo explores the medium of print, what it means to be “culture creators,” and how a publication can lead to discourse, among other topics. Lehmann explained that in order to keep the journal from only serving to circulate ideas and opinions, “We really are trying to frame these arguments and these articles around questions so that people can continue to be thinking about them.”

Peripateo hopes to have its first issue out during this spring’s reading week. On the back cover, readers will be able to read the benediction “Selah,” a Hebrew word indicating a pause or a breath mark. Lehmann said, “We are pressing the Swarthmore community to have that kind of openness and then spend time pausing and reflecting and growing.”