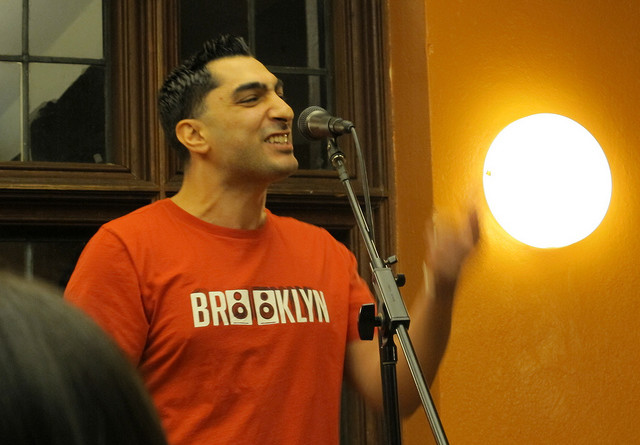 I’m not outstretching an olive branch and a rifle, I’m extending reality.

Palestinian-American poet, writer, and activist Remi Kanazi spoke and performed for a packed Paces Café on Monday night. In a collaboration of student groups, Paces hosted SPJP (Students for Peace and Justice in Palestine) and OASIS (Our Art Spoken in Soul), and offered Mediterranean foods in addition to the regular menu.

SPJP member Ahmad Ammous ’13 said that the group had the idea to invite Kanazi to Swarthmore through an email with suggested performers sent out to many Students for Justice in Palestine (SJP) groups across the country.

Three OASIS poets opened for Kanazi, each performing one poem that evoked the passion of struggles against injustice. Noel Quinones ’15 read a poem titled “I have held the hand of revolution,” Alaina Brown ’13 an untitled piece, and Ian Anderson ’13 a poem called “Open letter to Rioters.”

Nida Atshan ’13 next took the microphone with a holiday song that she used to sing with her sister growing up in Palestine. The meaning of the Arabic song is “we can never really be happy and fully enjoy the festivities until the occupation is over,” said Atshan. After she sang for the room, a melody both haunting and beautiful, Atshan welcomed Remi Kanazi to Swarthmore.

From the moment Kanazi stepped in front of the microphone, he radiated energy, zeal, charisma, and passion. He first gave a brief history of his life as a Palestinian-American who grew up in a small town in Massachusetts, all in rapid-fire anecdotes and witty quips. He then promised the crowd “we’ll tell stories, we’ll tell poems, we’ll tell more stories.” And he kept his promise.

The first poem Kanazi performed was “Co-existence,” a response to a proposal of co-existence as a solution to the Israeli-Palestinian conflict. In the poem, he expressed his frustration at a proposed compromise that in fact marginalizes Palestinians. “I let you steal my food and call it Israeli salad,” said one line in the poem. “I don’t want to co-exist, I want to exist as a human being and justice will take care of the rest.”

Between poems, Kanazi shared more of his background as an immigrant in America, his family’s history in Palestine, and his beliefs as an activist working against injustice. In his next poem, “Home,” Kanazi spoke of his connection to struggles regardless of their direct implications on him with lines like, “Remembrance is a part of action,” and “I’m a product of America, yet no less Palestinian.”

In his next poem, “The Dos and Don’ts of Palestine,” Kanazi spoke directly to the audience, parodying the cautious attitude of some Palestinian activists. “Don’t call it genocide, we don’t want to offend,” he instructed. “It’s not your job to fix their ignorance.” The feisty piece ended with the resigned, “don’t … just don’t … and that will lead to doing.”

To preface the next poem “Before the Machetes Are Raised,”  Kanazi warned of the danger “when we dehumanize people, whittle them down to statistics.” The poem itself addressed the American attitude towards the military: “so quick to honor the troops … but don’t dare mention the widows.” He spoke of the role of military again in the poem “Refuse,” which speaks of the brutality people commit and the loneliness that comes after such an experience.

Other poems included “This Poem will not end Apartheid” and “Normalize This” which urged against allowing artistic and academic efforts to replace direct action. Before his poem about sexual abuse, rape, and misogyny perpetuated by culture, he reminded audience members that injustice exists everywhere and that taking action in our own communities is essential.

He closed with a message to students to stand up for what they believe in, and stressed that, “as long as you are fighting oppression, you’re an ally.”

SPJP member Alis Anasal ’15 said that she and the group were “inspired by the spoken word community at Swarthmore” and “how activism and art are linked.”

Razi Shaban ’16, also a member of SPJP, said that this event and Kanazi’s accessibility worked so well for SPJP because the group tries not to be political and instead, “one of the main goals is serving as an access point for the community.”