Arts & Features » Theater Roundup: A Preview of the Season Ahead 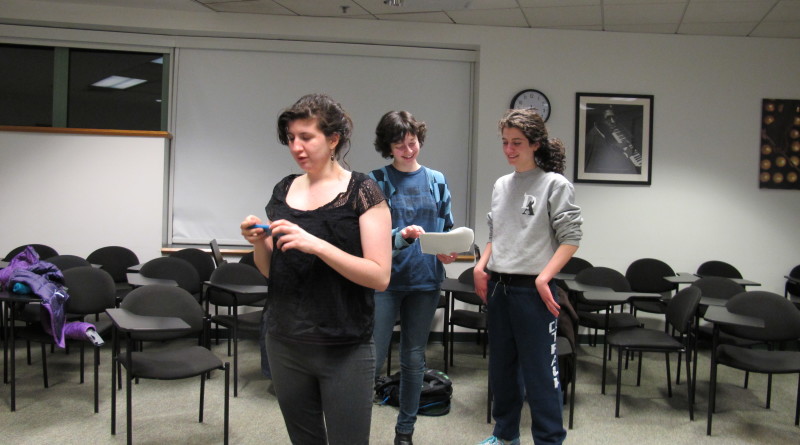 This season, theater at Swarthmore will range from psychological drama to love stories, from musical theater to original student plays, from a night of cabaret to classic Shakespeare.  The following is a roundup of the productions that make up what Elizabeth Stevens, acting chair of the theater department, calls a “sprawling season.” Read on for a glimpse of this semester’s performances.

Purim, a Jewish holiday that celebrates an exciting story with costumes, food, and drink, culminates in the tradition of a theatrical retelling of the story: the Purim Spiel. Swarthmore’s Spiel will take place on the day of Purim itself, Saturday ,February 23, with an invited dress rehearsal on Friday February 22. This telling of the Purim story, the story of a Jewish girl named Esther who becomes queen and outwits the villain Haman, will have its own flavor and style.

“We wanted to tell the story of Purim without leaving out any of the less savory details,” Director Amelia Dornbush ’15 said. “Oftentimes retellings of the book of Esther gloss over the parts that make people uncomfortable. We wanted to include those details, while still creating a fun and funny piece.”

This story will also have a unique twist: “Our spiel will also poke fun at Swarthmore,” Dornbush said. “Purim as a holiday is in part about profaning the sacred, so we spent some time talking about what things are considered sacred at our college that might be good to laugh at.”

For the first time in Yellow Stockings Players’ history, this spring’s rendition of Shakespeare’s Macbeth will be a main-stage production in LPAC. Director Patrick Ross ’15 has the chance to put on his personal favorite play with his own directorial interpretation: “I would say it’s a pretty conventional production, but my cast would probably balk at that. We’ve been calling it ‘Lesbian Macbeth,’ you see. After some excellent women auditioned, I decided to cast the show gender-blind, which did end up meaning that many of the lead roles (including both Macbeth and Lady Macbeth) are female.”

Ross and Assistant Director Sara Morell ’15 have also stuck to more traditional aspects of the play. These include an attention to Scottish culture (not extending to Scottish accents) and the attempt to adhere to the infamous curse of this play (not saying the name in the theater).

This senior acting thesis is, in the words of Elizabeth Stevens, “an intense intellectual play for three women…and there are virtually none.” The three women performing this Jean Genet play are Jeannette Leopold ’13, Meryl Sands ’13,and Sophia Naylor ’13.  The play is directed by guest artist Emannuelle Delpech Ramey, who is, according to Sands, “fabulous and beautiful and very good at her job. She has a very good sense of these women.”

The darkly funny play tells the story of two maids who are obsessed with their glamorous mistress, Madame, to the point of pretending to be her and plotting to kill her. Leopold said that the show plays with “submission and dominance and role playing.” Sands noted that “the play is about privilege—what happens when you have privilege, and what happens when you don’t realize what privilege is.”

Audrey Edelstein ’15, who is usually in the orchestra pit in theater productions, only started thinking about directing a cabaret night during fall break. But with co-director Paulo Debuque ’15, the idea of a low-time-commitment musical theater performance has taken off this semester. Edelstein and Debuque are creating a different kind of forum for performers—said Edelstein, “I wish it could have existed for me!”

For the performance, which will take place in Bond Hall, the “cast will break into small groups and choose what they want to do—it’s in the actor’s hands,” Debuque said. The acts do not have any specific theme and will be a little bit of everything. Both directors will be performing—and so will music professor Andrew Hauze.

This year’s Production Ensemble will tackle Anton Chekhov’s masterpiece, a play that is, in Stevens’ words, “one of the best plays of all time—just heartbreaking and rich.” The show is directed by visiting professor Richard Hamberger, and Russian Visiting Assistant Professor Brian Johnson is serving as dramaturge, helping to “explain cultural nuances that aren’t familiar.” Three Sisters  fortuitously coincides with Johnson’s current class entitled “Revolution in Theater: Chekhov, Bulgakov, and the Moscow Art Theater.”

Three Sisters tells the story of characters trapped in provincial Russia who want to leave, but cannot due to their life circumstances. Johnson called it an “existential dilemma that translates to all times.” Michele Johnson ’16 and Michaela Shuchman ’16, two actors in the play, both mentioned the challenge that this difficult show poses, but also spoke of their excitement and how worthwhile the challenge is. Shuchman emphasized the importance of Chekhov as a playwright: “His plays were the first of their kind where the audience saw their own reality on stage and could truly empathize and relate with his characters.” According to Johnson, the play’s message is universal. “I think that the play would interest anyone drawn to a thoughtful theatre experience that challenges them,” he said.

Smaller than many main-stage musicals of the past, this year’s production of I Love You Because will be performed by a cast of six. Director Abigail Henderson ’14 “fell in love with the soundtrack” of this modern love story, and had “wanted to do a fun musical with a small cast.” The show is set in modern day New York and was written by lyricist Ryan Cunningham with music by Joshua Salzman.

Sophie Miller ’16, a member of the recently assembled cast, spoke of the value of such a small group. “You get to know everyone really well—it is intimate.” This also makes for a different musical dynamic. “From a vocal perspective, they didn’t go easy on you in this musical…there are six part harmonies!”  She also made sure to add that the show “is very, very funny. The songs themselves are some of the funniest parts of the musical.”

Jeannette Leopold ’13’s senior directing thesis, written by Lanford Wilson, is both a psychological drama and a love story. Burn This has four cast members and begins with the main character learning of a friend’s death. In the ensuing drama, the characters must deal with loss and learn to love again.

With such sad material, Leopold said that she “want[s] to find all the lightness that I can and bring that out.” In terms of directing, she is finding that actors “have so many good ideas. I like to have them do what they know how to do.” Her professional guest (each theater honors major is entitled to a budget and one guest artist) is a lighting designer.

Going outside the traditional bounds of Swarthmore theater, Jacob Oet ’16 has written a play, held casting last Friday, and will direct his very own independent production sometime in mid April. He said of himself and Assistant Director Kara Ehlenfeldt ’16, “we are going maverick.”

The show opens in the middle of a meteor shower and three chairs in a front yard of a country home. Two chairs will be occupied by a brother and a sister, and a third will be empty. Off to the side will be a younger brother in a wheelchair. “This is our wonderful tableau,” Oet said.

The third chair will be filled when an ex-president walks on stage, and the play will then begin. “Ultimately the play is exploring the way we make it more difficult for ourselves to have human interactions,” Oet said.

Meryl Sands ’13 is currently in a content-gathering stage of her senior directing thesis: an as-of-yet untitled devised piece that she is writing herself. In a devised piece, “you start with the seed of an idea—or a theme, or a source text or a bunch of source tests—and then you build a play,”  Sands explained. The play has a cast of five and will potentially feature circus arts. Sands is looking into hiring a guest artist who will consult on puppetry and playing with shadows.

Sands said that in her piece, “[t]he idea is that there are people and ideas in our lives that aren’t real—but have a real impact on our lives.” The working title of the show is “People You Haven’t Met Yet.” Though still in early stages, Sands’ philosophy towards theater assures an inspiring production. She believes that “theater should be fun and accessible. It should point us towards the beauty and joy in the world.”

Closing out this season will be the Night of Scenes, featuring four student directors. “They do it pretty much on their own,” said Stevens, the students’ professor. “The idea comes from them and they really are the bosses. I help them do what they want to do.”

This article has been updated to reflect the following corrections: Joshua McLucas’s class year is 2015, not 2014. Katie Goldman ’14 is directing a piece in Night of Scences, not Kane Golaman ’14.

0 thoughts on “Theater Roundup: A Preview of the Season Ahead”