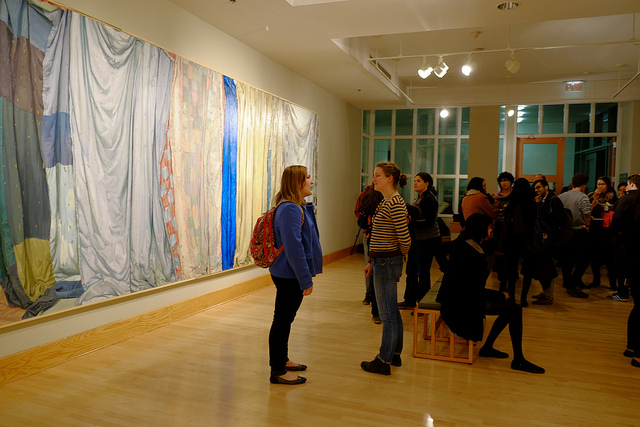 We talk a lot about community here at Swarthmore: the ideas of connection, love, and complexity, and the values that keep us bound together; the importance of looking at everything from multiple perspectives, and seeing the world as art – that is, as subjective and requiring effort in order to see what somebody sees from their angle. We know and honor these ideals largely by communicating about them – vocalizing, to a deliberately significant degree, what so often can go unexamined.

Sometimes we forget that community isn’t something that forms on its own. A quilt may seem beautiful and flawless, but turn it around and the earnest stitching shows itself. A community is often sewn in a thousand secret places, places we would do well not to ignore. The current exhibition at the List Gallery, Sedrick Huckaby: Hidden in Plain Sight, curated by List Gallery director Andrea Packard, helps remind us of the importance of consciousness, of acknowledging the ways we build trust and family and fulfilling lives. Nothing, Huckaby’s paintings show us, merely exists. Nobody, Huckaby’s portraits show us, merely exists. Everything and everybody comes into being through rough processes that are never really complete. Huckaby’s work honors this “coming to be,” the narrative that lies behind what is.

Huckaby, a native of Fort Worth, Texas, and graduate of the Yale M.F.A. program, has established himself as an important artistic voice, with work in permanent collection at the Whitney Museum of American Art and the Museum of Fine Arts, Boston, to name just two. Presently, Huckaby is Swarthmore’s 2013 Donald J. Gordon Visiting Artist and Lecturer. He spoke about his work yesterday afternoon in the Lang Performing Arts Center Cinema, followed by a reception in the gallery. The talk, which included a short video, a slideshow, and clip of Huckaby’s grandmother singing a spiritual song, was an intimate look into the artist’s past work, family, and plans for future projects.

Hidden in Plain Sight includes both Huckaby’s large paintings of quilts in the main room of the gallery, and a collection of over 100 portraits in the next room, a new series titled The 99%. Huckaby mentions that he is drawn to quilts partially because of their significance on the Underground Railroad. Certain patterns or orientation of hanging quilts were said to mark safe houses for African Americans venturing north.

Huckaby’s representations of quilts – emblems of family, tradition, and history – are often equally subtle, metaphorical, and laden with import. Many of the paintings make use of impasto – a technique that involves layering paint thickly and deliberately. In Winter, one season of the four represented in Huckaby’s series A Love Supreme (named after the John Coltrane album), is 8 feet tall and 20 feet long. There are subdued blues and a sense of waiting. We see the ties that hold in the quilt batting, the underbellies of these towering testaments.  These stitches are the kind of thing we might run our hands over before falling asleep, but rarely our eyes. Another painting, Quilt for Christ II, portrays a quilt of many creased squares, a thousand different opportunities, depending on how you look at it, to form a cross.

The portraits include both sketches (ripped right out of notebooks) and lithographs, the multi-layer process which produces more depth. There are also a few paintings and oil pastels, clumps of paint making visages thrust forward out of the wall. The edges of many of the pages were intentionally left rough in order “to accept and celebrate the informality of those gestures, those encounters,” Packard said. “You’re not separated from it by glass and glare and reflection,” she points out. Everything is immediate, out in the open, each drooping belly or set of squared shoulder exposed.

Huckaby began by drawing members of his neighborhood in Fort Worth, Texas, and soon expanded to other faces and stories. Sometimes the picture will contain a few scrawled sentences, the words of the subject, their voice and eyes moving us to listen. “I’ve been in the military for 3 years. After that they let me out, but they gave me a check. They say I don’t have it all…upstairs…,” says one. Another reads: “There was a man in Pakistan with no arms. He could draw very well with his feet…it is a gift from God. This picture looks a little like my dad…”

Many of these works were created during Huckaby’s recent residency at the Brandywine Print Workshop in Philadelphia. They are arranged to resemble a quilt – each scrap contributing to the kaleidoscopic whole. “Collectively, they tell a story […] He gives voice to some people who might not be asked to speak,” Packard said. “By being attentive to others, he invites them to be attentive to their own humanity.” As Huckaby put it during his lecture, “This whole series was about aggrandizing average, everyday people.”

Much of Hidden in Plain Sight is about being attentive, aware, and in tune with things that are hard to see. That sometimes we don’t want to see. The things that bring things and people from existence to life. For instance, in the arresting Her Hands on the Word, two huge hands are formed from ragged clumps of browns and reds, each wrinkle and knuckle, the surface gnarled and nubbly. Showing me this painting, Packard held out her own hand, asking me to do the same, pointing out the differences due to age and “a lot of turpentine.” We looked – without hesitancy or pretense – and saw.

Huckaby spoke about this piece, explaining that the hands were his grandmother’s, a woman everybody called Big Mama. “Big Mama’s house […] was a place where everyone was comfortable. Where everyone would meet for the holidays,” he said. He knew he wanted to paint the family matriarch, but when he returned, he was surprised to discover that her age had made itself apparent. “What I found was a more fragile Big Mama, who was in the last two years of her life,” he said. Huckaby, however, made sure to capture every year in her face, determined to keep nothing hidden.

In the painting, the Bible is open to St. John 17:4: “I have glorified thee on earth: I have finished the work which thou gavest me to do.” And soon after, 17:7: “Now they have known that all things whatsoever thou hast given me are of thee.” It seems that Huckaby seeks to glorify all things: from weathered fingers to the backs of quilts, hoping to remind us of veiled but constant divinity, of the wrinkles and stitches that built and made us.

Huckaby doesn’t simply present these overlooked details, however. Many of the themes he represents in his work are invisible concepts, easily hidden and disregarded. God, love, and community may not exist physically in the abstract, but this gives the artist freedom to remake them in any form he wants. The word, in a sense, must be made new.

These themes may be hidden in plain sight, but once we learn how to see in ways that are not plain – that are varied and open and enlightened and elevated by art, by examination – then they might show themselves, in disguise like the Greek gods. Afraid their true appearance would blind us mortals, so used to living in the dark.

0 thoughts on “Hidden but Glorified: Sedrick Huckaby Exhibit at the List Gallery Ask Us to Look Again”