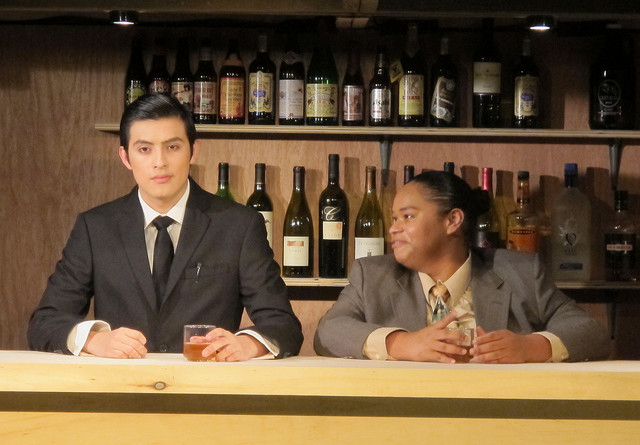 In this year’s Senior Company production, The Cosmonaut’s Last Message to the Woman He Once Loved in the Former Soviet Union, by David Greig, words fail the characters again and again. These quirky, yearning people reach out to those around them but fall short. Their words may not make contact with each other, but they certainly hit the audience.

“Every one?” asks Oleg, staring into star-speckled space.

“Every one. In a thousand different ways. Each way a thousand times,” Casimir responds.

They sit, side by side, hands in their pants, surrounded by a void, more alone than they can even conceive.

The poetry of the characters’ dialogue and strength of their want is accentuated by a breathtaking set. Three video screens become the rocket’s монитор, or monitor, blue sky, black sky, the arrivals and departures board of an airport. The cosmic orb dangles or slides above it all, glowing red and sterile.

The character foils also highlight another central theme of the show: duality, the inherent complexity and balance of every person and life itself. Sands quoted one of her favorite authors, John Green, as posing a question central to The Cosmonaut’s Last Message: “How do we imagine other people complexly?” It’s a theme and a struggle that Sands sees as central, too, to a Swarthmore education.

“As seniors . . . graduating, one of the most important skills this project teaches us is how to be empathetic people,” she said. “When I think about theater, I also think a lot about empathy,” Bravo Montenegro said. Actors must understand their characters in order to embody them, and the audience must understand them as well in order to benefit from the performance.

“These characters do terrible things, but we love them because they try so hard to do the right thing and be good people. And we try too,” Sands said. “In order to be compassionate, empathetic, we have to see their motivation.”

“It’s definitely been an arc and a process . . . to understand my character as a person . . .  to finally realize that there are good and bad things in everyone,” Bravo Montenegro said.

This is an especially important message to internalize as graduating seniors, feverishly crafting their best selves to show to the world. “We are developing out identities, we’re figuring out who we are going to be as adults . . . and who we are as artists,” Sands said. Empathy, after all, is not just about understanding others, but understanding ourselves. The directors hope to provide the audience with similar experiences of empathy and revelation. “My hope for the audience is that they . . . recognize themselves in these characters and find some cathartic joy through that,” Sands said.

Life, in addition to character and empathy, is portrayed in all of its complexity. “It steals over you, doesn’t it, like a damp towel over a flame. Fucking life,” says Keith, played by Vianca Masucci ’13 with incredible versatility. Husband to Vivienne and lover to Nastasja (Kari Olmon ’13), Keith is truly seeing double – both the towel and the flame. Sands and Bravo Montenegro were interested in exploring “how difficult it is to be alive versus how great it is – how much joy and beauty there is in the world,” Sands said. Near the beginning of the show, Vivienne and Keith are dealing with the malfunctioning of their television, blaring sad and sadder news. “You’d think they could print some joy,” Vivienne says. “There must be some joy.”

Moments like these – perfect moments of honesty – are woven into the droning isolationism of the play, helping further to bridge the show together. Keith manages to open himself up to Nastasja.  “I think I’m probably in love with you,” he says, stuffing his shirt back into his trousers, dropping a bill on the bedside table. He records the sound of her breathing as she sleeps and takes it with him, leaving her behind.  Love and sex bring out desperations, forging sloppy, heated bonds, often insubstantial.

Oleg waxes poetic about one of the women on his cards, Vanessa, imaging the smallest blemish on her thigh, the taste of every part of her. He gives his whole self to a flat face, a naked body almost rubbed through by his fingers. Alcohol, too, lets these characters talk to each other without being scared. “I get drunk,” says Keith, leaning over a half-empty glass. “Can I be honest with you? I can’t control myself. Something wild rises up in me and I just talk to anybody. I tell the truth. I tell lies. Whatever.”

Another way the cores of these characters are revealed is by the rocket, which is able to access parts of them they won’t share any other way. “Is it true these spy satellites can take pictures in which you can see the face of the playing card a man’s holding?” asks the Proprieter, played by Bravo Montenegro. “The tiniest blemish on a woman’s skin? Is it true they can see?”

“It’s true,” says Bernard, also played by Masucci. “It’s perfectly possible that this craft contains all the secrets of mankind” – these secrets that are swallowed, again and again, every second.

“It’s especially interesting to be working on a play about communication when so much of theater is about communication,” Sands said. “When it comes to art, theater is the most face to face.” Not only must the actors communicate with the audience, they must do the same amongst themselves. The Cosmonaut’s Last Message as a production manages both of these connections with grace. The play is able to touch back down on earth and put up its flag – not the Soviet red or the American cheer but a new sort altogether. The kind of flag that says more than “We were here.” More than “We made contact.” The kind of flag that celebrates more than the act of touching down, but the long journey to that moment, through cold space, that feels like it might never end.

The Cosmonaut’s Last Message will be performed in LPAC’s Frear Ensemble Theatre on December 7 and 8 at 8 p.m. and December 8 and 9 at 2 p.m. The performances are free and open to the public.