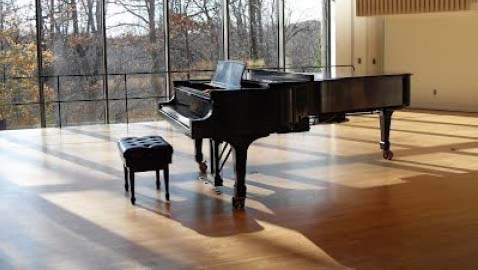 The Fetter Chamber Music Concerts are coached through funding from the Elizabeth Pollard Fetter Fund, named in honor of Elizabeth Fetter ’25, who was deeply passionate about music and highly involved in Swarthmore campus life. The concerts occur at the end of every semester and are a moving example of the sheer skill of Swattie musicians.

The concerts this semester were enhanced by the addition of a new a capella chorus group, organized by Jenny Koch ’13 and conducted by Visiting Associate Professor of Music Janice Hamer. The group performed the haunting “Gloria” and “Ave Maria” but wasn’t afraid to experiment with shorter, rhythmic pieces like the South African freedom songs “Freedom is Coming” and “Gabi Gabi.”

The new group began with Koch, who recognized a lack of chamber singing ensembles at Swarthmore and thought that many singers would be interested in the chance to perform in this unique setting. “We’re basically an a capella group—but we don’t arrange our own music,” Koch explained. “We perform mainly classical repertoire, ranging from the 1500s to the 1800s.”

Jessie Chan ’15, a soprano in the group, contrasted it with singing in a larger chorus. “[In a choir] there are a lot of people less in tune with each others’ voices,” she said. “Here, we balance each other out.”

William Schuman’s “Be Glad then America,” a deeply patriotic piece in the chorus’s repertoire, played on this breakdown of sound. The piece exposed individual elements and performers in a way that was at once unifying and demonstrative of individual skill. Chan noted that the group would be performing at Plush Mills retirement home on December 13, an “exciting opportunity” for the new group and a way to do something for the community, she said.

The second piece, Claude Debussy’s “Sonata for Cello and Piano in D minor,” was one of the most majestic pieces in the concert. Simple yet masterful, the cello and the piano worked separately to produce music seemingly composed of pure emotion in this duet.

Cellist Lucy Peng ’15 said that the sonata was a challenge because “it wasn’t a classically conventional piece.” She said that the musical abstraction made it difficult to coordinate with pianist Jamal Dillman-Hasso ‘15. “His passion and intensity when creating music makes the final performance worth it, because in the end, it is about the … synthesis of an aesthetic environment that you can immerse your potential audience in.”

Swarthmore students’ original work was particularly captivating in the second Fetter Concert and Sunday’s orchestra concert. The pieces provided a contrast to the concerts’ more traditional, classical pieces. Some of these newer, “modern” pieces seemed to have a dark, violent tension in them that lent them a furious pace; for example, Alejandro Sills ‘13’s “Oscillation Prime.” Described as “a representation of order that dissolves into chaos” by Sills himself, the piece seemed to have a sense of chaos pulsating just beneath the surface. Sills said he himself coached the musicians halfway into the semester and that the experience was “extremely beneficial.” “It always feels great to have my pieces performed,” he added.

Many of the original compositions built on a theme of dramatic tension. Niels Verosky ‘14 executed this theme in a way that kept you on the edge of your seat in his “Reflection Stacks.” Ben Kapilow ’13, on the other hand, created a whimsical fantasy fraught with furious notes in his piece, “Propulsive Behaviour.”

This weekend’s final concert showcased Swarthmore’s orchestra and featured pieces by Johannes Brahms and Igor Stravinsky, among others. Orchestra tuba player Josh Turek-Herman ’16 described the night as a performance with “a lot of experienced players and fun music.”

The sheer musical skill of the artists was a pleasure to witness in all performances. One could attend these concerts as an intrigued novice and walk away from each one educated in the beauty of chamber music. The concerts showcased the latent talent of Swarthmore musicians and its moving, transformative power.