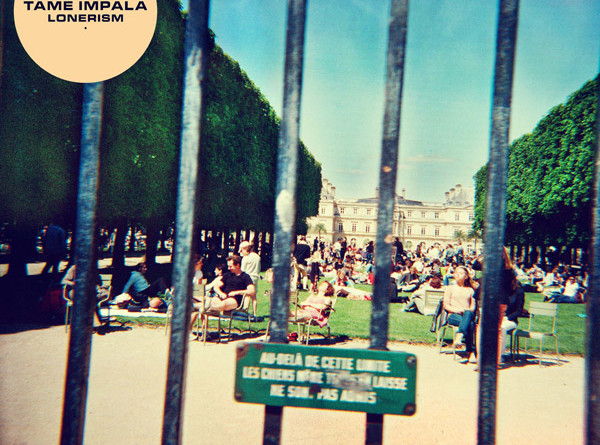 Tame Impala performed at Union Transfer earlier this month in a concert that got me hooked on the band. The band’s rise in popularity has been swift; in just a few short years, they have stampeded onto rock music’s stage. At the concert, a local bartender standing next to me told me that he saw Tame Impala live in a church basement venue two years ago. When the lead singer Kevin Parker said that he and his band weren’t used to playing venues as large as Union Transfer, the bartender screamed “better than a church basement!!!” The bartender points out the rapid growth of this band in just a short two years.

I remembered when I first heard of the band last summer. I checked out their brilliant 2010 album Innerspeaker. I instantly fell in love with the song “Solitude is Bliss,” with its sharp, go-with-the-flow guitar hook playing throughout. The emotion I felt during this album, with gems like “Lucidity” and “Desire Be Desire Go,” was a confidence emanating from the self, without any reliance on the approval of others. However, the emotion I feel from listening to 2012’s Lonerism is more anxiety based, almost as if the attitude espoused by Innerspeaker isn’t working.

Though Tame Impala is frequently compared to a modern, indie psychedelic take of the Beatles, and though Kevin Parker is surely no John Lennon, his voice does merit the comparisons. The album Lonerism, however, has catapulted them into indie stardom. The praise they have earned is certainly warranted. Lonerism on the whole has slow songs with frothy synths that are anxiety-ridden and provoke introspection, and also has fast songs that feel like they are charging at you compelling you to join the herd, as felt by unceasing guitar chords and confident lyrics. This emotional diversity on the album gives it the feel of a more complete album; that in combination with Parker’s distinct voice, progressive rock effects, distinct rhythms, and creative melodies makes a gripping album on isolation.

The album starts out with the upbeat “Be Above It.” The song is driven on by the keyboardist, who utters the phrase “I gotta be above it” throughout. When Parker’s voice comes in, the magic starts, as a weirdly oscillating, booming guitar chord plays after his line. The chord changes the dynamic of the song each time it is played throughout, almost like it is a DJ’s hand moving the song back and forth like a vinyl. The next song, “Endors Toi,” is similar to “Be Above It” in that it is instrumental driven, and races very quickly to the tune of marching distorted guitar chords.

“Apocalypse Dreams,” perhaps the most fully realized track on the album, revels in uncertainty and a feeling of awe as you realize you don’t have control over anything. Parker sings slowly “Everything is changing, and there’s nothing I can do.” It is the first epic of the album, and the most complete song. Upbeat verses, like our fast-paced lives, lead to introspective pauses which Parker uses to reflect. This reflection leads to anxiety, as we hear in the “Everything is changing” line. This is the point of the song where social anxiety begins to replace the confidence of the previous album, and the theme inherent in the album title starts to come into play.

This social anxiety sentiment is further repeated on both “Why Won’t They Talk to Me” and “Feels Like We Only Go Backwards.” The former is one of the more electronically stripped songs on the album. Droning synths in the background lay the groundwork for the saddest song on the album, where Parker sings in a vulnerable but strong voice about social anxiety. He says “I don’t need them and they don’t need me,” and later says “Why won’t they talk to me? I thought I was happy.” This song perfectly captures the feeling that sometimes we think we have it all figured out, but sometimes it just takes some negative experience to unravel our happiness and makes us think about how we live our lives.

“Why Won’t They Talk to Me” also sets the scene for the song “Feels Like We Only Go Backwards.” It is a very lax song, with its frothy keyboards and its seemingly on-repeat chorus; but somehow something new is being said with each chorus, whether it be changing the keyboard chord pattern or the bass line. Throughout the song is the emotion of the helplessness of trying to move on with your life but only feeling like you move in the opposite direction evident, exemplified by the song’s title.

However, the album takes a turn with the song “Elephant,” which is much more confident and upbeat. The thunderous “D” guitar chord marching over the course of the song mirrors the stomping of an elephant, and makes all of the emotional struggles throughout the album seem worth going through. The song also bursts into an all-out Kevin Parker guitar solo that encapsulates the inventiveness of the album as a whole. The guitar sings out with its own voice and runs free as the synthesizers keep the beat moving forward.

Perhaps the best parts of the album, though, are the humorous yet deliberate little things Parker does. For example, the seemingly random pause in the middle of “Apocalypse Dreams” and the “Yeahs!” in Elephant. These quirks are something special, because while the album carries a serious tone throughout, it is nice to know that the band doesn’t take itself too seriously.

Tame Impala take relatively simple but creative synth and guitar chord progressions and pair them with stampeding drums, a strong and distinct voice, and numerous electronic effects, to create complex songs that are true to their simple rhythms. The songs put a modern edge on psych-rock by taking all of these strong, forceful components and mashing them together, creating a chaos that is both a challenge and delight to listen to. Tame Impala warrants a listen. Or two. Or twenty. These Aussies don’t disappoint.