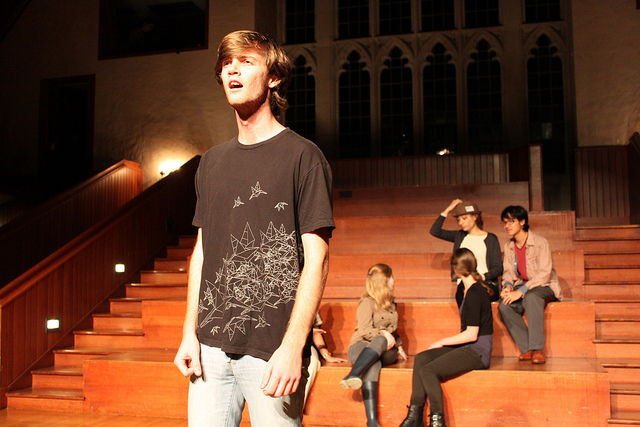 This evening, Othello, Isabella, Iago, and others of Shakespeare’s characters—famous, infamous, and lesser-know—will mingle in Upper Tarble during The Yellow Stocking Player’s Night of Scenes. An annual event, this year’s performance is a collage of selections from Measure for Measure, Coriolanus, Othello, and Cymbeline.

The night opens with a scene from Measure for Measure, directed by Abigail Henderson ‘14, in which Claudia, Mercer Borris ‘16, has been imprisoned by the Judge of Vienna for having “had sex,” we’re told, “with her fiancé.” The Judge, Angelo, has also told Claudia’s sister that Claudia’s death sentence will be pardoned if she agrees to sleep with him.

When the sister, Isabella, portrayed by Dinah Dewald ‘13, meets with Claudia at her cell, she is resolute in refusing Angelo’s “devilish mercy,” and raises her voice to a shout as Claudia suggests that corporal acts are least lethal of the deadly sins. But Claudia’s character is not solid in her conviction, as she waivers between suggesting that her sister accept Angelo’s demands and insisting, “Thou shalt not do it.”

Measure for Measure traditionally features an imprisoned Claudio, as opposed to Claudia, who has been sentenced for impregnating a woman with whom he is not yet legally bound. Changing Claudio’s gender teases an subtle dynamic out of Shakespeare’s text, opening Isabella’s reasons for denying Angelo into a potential condemnation of her sister’s sexual behavior.

Coriolanus, one of Shakespeare’s longest and most intellectual plays, is the most difficult of the night’s selections, but is stripped to a series of politically resonant vignettes by Preston Cooper ‘15’s editing and directing. We first see Coriolanus, a military general portrayed by Jamie Burke ‘15, as he mocks a crowd of Roman citizens for not having received battle-wounds for their country. “For your voices have I fought,” Coriolanus exclaims, drowning out the citizens who have begun to protest his conduct.

However, as Coriolanus’ ambition to be a consul becomes more obvious, he’s encouraged by friends and by his mother, Volumnia, Anita Castillo-Halvorssen ‘15, to “perform a part thou hast not done before,” namely, to act agreeably toward the populace so as to win their vote.

Again, a largely female cast—for example, the casting of Menenius, Coriolanus’ friend, as female (played by Nina Waldman ‘16)—intensifies the tension between genders that is largely confined to a mother-son relationship in Shakespeare’s script. In the final scene of this performance, Coriolanus is the only male on stage as a number of his female relations agree that he must change his disposition to suit the public.

Coriolanus’ refusal to seriously address the populace comes across as a matter of disrespect and hot-headedness in this performance more than as a moral stand against crowd-pleasing, as could be read in Shakespeare’s text. However, the performance’s insistence that Coriolanus is faulty because he refuses until the last moment to change his demeanor, manifest in the voices of Volumnia and Menenius, as well as the Roman citizens, focuses Coriolanus into a series of images circling political manipulation. While the strong narratives of Othello, Cymbeline, and Measure for Measure drive the performances like prose, Coriolanus’ performance would better be categorized as poetry for its lyric sensibility.

Cymbeline and Othello are both notable for their departures from each play’s traditional conceptualization. In Othello, directed by Sara Morell ‘15, the title role is filled by a woman, thereby marking Othello as “Other” in Venice not because she is described as a “moor” but because she is in a lesbian relationship with Desdemona.

Morell centers her selections from Othello around Iago’s character, saying that she wanted “to show this arc [ … ] from the beginning of Iago’s manipulations.” Each scene from Othello opens with Iago, Kevin Roberts ‘14, alone on stage, fiddling over a glass chess set. While Iago’s game against himself is at first benign, the chessboard appears with only four remaining pieces before Othello’s final scene of the night, one of which Iago checks before the stage lights darken.

Cymbeline, directed by Josh McLucas ‘15, is an experiment in editing that turns Shakespeare’s difficult-to-classify play into a more formulaic tragedy. Cymbeline is sorted with the tragedies in the First Folio of 1623 but modern editors tend to categorize it with Shakespeare’s romances. McLucas describes his own first encounter with Cymbeline, saying, “I thought it was a horrible play.” He said, “It’s really convoluted [ … ] but everything comes together.”

In McLucas’ revisioning, “poison is poison” and “lovers have their tragic flaws,” McLucas said, referring to the potion that Imogen, Sophie Miller ‘16, drinks after reading a letter from her lover, Posthumus, Theo Noomah ‘16, in which Posthumus implies that Imogen has been unfaithful and requests that his servant kill her.

Of course, Imogen has not been unfaithful; in a scene that remains remarkably close to Cymbeline’s original text, McLucas highlights what he believes is Posthumus’ tragic flaw: a lack of patience. Posthumus is quickly convinced by Iachimo, Raymond Elias ‘15, that Imogen has betrayed him despite his friend Philario’s, Mike Lumetta ‘15, urges to “have patience.”

McLucas’ Cymbeline retains a level of coherence across the four sections presented during “Night of Scenes” that is notable given the original text’s sprawling landscapes and plotlines. The close editing of Cymbeline’s passages also allows McLucas to offer an unquestionably Shakespearean narrative while grounding sections of the text that are originally more in potentia—anxieties about reputation, gender, origin—than they are actual.

The Yellow Stockings Player’s Night of Scenes opens on Thursday, November 15th, at 7:00 p.m. in Upper Tarble, with additional performances on Friday the 16th at 7:00 p.m. and on Saturday the 17th at 2:00 p.m. Performances are free and open to the public.