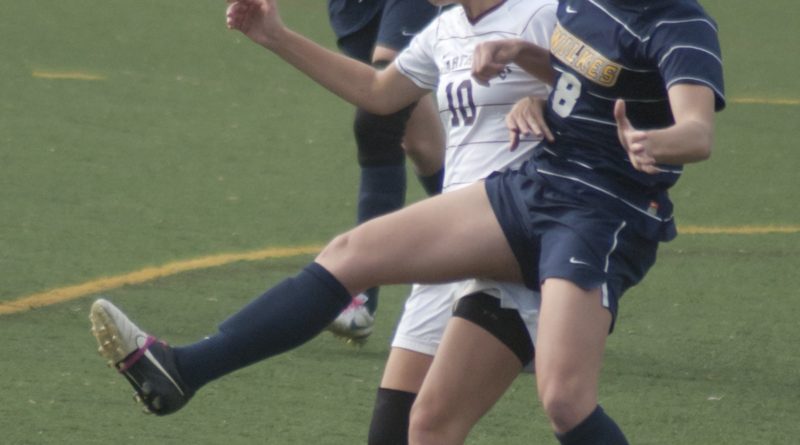 After a 12-6-1 season, the Swarthmore women’s soccer team earned the second seed in the ECAC South Region postseason tournament. In the opening round, the Garnet eased past Marywood 2-0 to reach the semifinals. As the highest seed able to host (No. 1 seed Stevenson had other commitments), Swarthmore played host to the tournament semifinals and final last weekend.

The Garnet took on Wilkes in the first semifinal of the day on Saturday, and from the very beginning looked to have momentum on their side. Less than 90 seconds into the game, Emma Sindelar ‘15 put the Garnet in the lead with her sixth goal of the season.

Their opponent refused to fade, though, and after some even play by both sides, the Colonels struck in the 30th minute to tie the game at one apiece. The score remained tied at 1-1 for the rest of the match, thanks to strong defensive efforts from both teams. Reba Magier ’16 had three saves to keep the Garnet in the match, while her opposing counterpart had four.

Magier said the defensive effort was a key for the Garnet to compete not only in this game, but throughout the whole season as well. “I owe a lot to my back line for helping me out. If I didn’t have this great of a line, then the scores of our games would be much different.”

Two overtimes passed, and neither team was able to score a decisive goal to win the game and advance.  As a result, the Garnet and Colonels went to a penalty shootout to determine which team would move on to the ECAC final.  Swarthmore’s players were on target, but Wilkes’ goalie came up with a save on one shot. After making all five of their shots, the Colonels advanced to the final by a shootout score of 5-4.

Both Magier and captain Ariana Spiegel ‘13 said the end of the match was stressful. According to Spiegel, “It is probably one of the most nerve-racking experiences that any player will face. There is a lot of pressure in that one moment on the goalkeeper and our chosen kickers. You can feel your stomach turning inside-and-out just waiting to see your teammates take their kick.”

Magier, who aside from being in goal was one of the Garnet shooters, added, “Taking a PK is very different than being in goal. The kicker has more power and definitely more pressure.”

Despite not making it past the semifinal game, the women were not disappointed with their effort. Spiegel pointed out that the reason the game went to penalties in the first place was because the team fought so hard to keep Wilkes off the scoreboard. While the penalty shootout might be a “crazy” situation, she added, “That’s soccer for you.”

In Sunday’s final at Clothier Field, Wilkes went on to face Stevenson, who rolled by Lebanon Valley 2-0 in the other semifinal. The final was a closely fought match. Wilkes scored in the first half to take an early lead, but Stevenson found an equalizer in the 61st minute. The score stayed that way for the rest of regulation, when the match went into overtime tied at 1-1. Just minutes in, Kayla Curry of Stevenson scored to give the top-seeded Mustangs the tournament championship.

The conclusion of the ECAC tournament ends the Garnet’s season. Spiegel said that even though another team may have won the tournament, “We sure did play our hearts out. I feel like we had a lot of great moments filled with amazing soccer and fun, and for that, I can say I am satisfied with our season.”

As the season ends, so do the careers of the graduating seniors: Spiegel, Beth Martin ‘13, Haley Most ‘13, Cassie Strawser ‘13, and Mariam Vonderheide ‘13. For Spiegel, it was an emotional time: “[The season was] filled with moments that are your lasts, but it really makes each opportunity to play that much more appreciated. I love playing soccer and that love has been there since I was six and my parents signed me up for this sport, to my freshman year of college, until last Saturday when I stepped off the field for one last time. The team has always had that type of passion and love for soccer, since I’ve been at Swat; that type of passion is why playing soccer is just so enjoyable.”

The next season will begin sometime in late August; the schedule will be released when finalized.