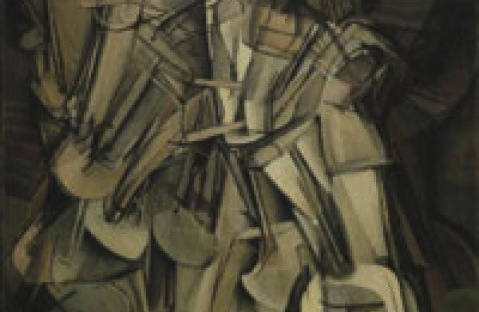 At the intersection of music, art, and dance; of the Bride (and the bride), chess, performance, and chance; of art, the audience, and reality; the observer finds the latest exhibition at the Philadelphia Museum of Art. Dancing around the Bride: Cage, Cunningham, Johns, Rauschenberg, and Duchamp is a veritable crossroads of avant-garde art surrounding the work of Marcel Duchamp, employing mixed media in a unique display of these artists’ collaboration.

The exhibit features some of Duchamp’s most celebrated works, such as Bride (1912), Nude Descending a Staircase (1912), and The Bride Stripped Bare by Her Bachelors, Even (The Large Glass) (1915-23). The Large Glass explores negative space, allowing objects behind the glass to come into view as part of the artwork. The piece can speak for itself, but the content changes depending on the viewer’s perception.  Visible throughout is Duchamp’s artistic philosophy of the “readymade”: accessible artwork that the public can understand.

Other artists in the exhibit, such as John Cage, use different media explore the ideas of negative space and viewer interpretation. Riffing on Duchamp’s ideas, Cage composed some of his most well-known works such as 4’33”: 4 minutes and 33 seconds of silence written into the score, allowing the sounds from the environment to inform the listener’s perception of the piece. Two pianos in the museum play Cage’s scores, building on ideas that are represented visually elsewhere in the installation.

Cage’s scores were also set to Merce Cunningham’s choreography, which is performed in the exhibit’s main gallery amidst paintings by Robert Rauschenberg and Jasper Johns. Both artists’ work present the viewer with found objects in the canvas. They ask what it means to be a piece of art versus the real object, versus the idea of the object. Seeing these works side-by-side with those of Duchamp illustrates the fascinating progression of these ideas between artists.

Cunningham’s choreography further pushes the limits of a given medium: the dancers move in strange, twisted forms, forcing the audience to redefine their conception of what dance is and what staged movement should look like. While watching, the audience must come to expect the unexpected. Particularly in front of the backdrop of Cage’s score, the dance questions what performance means.

These artists, all inspired by Duchamp, come together in this exhibit in an unprecedented mélange of similar ideas and themes. Each different medium and artist explores the idea in a new way, challenging and intriguing at every turn.

Dancing around the Bride: Cage, Cunningham, Johns, Rauschenberg, and Duchamp is open at the Philadelphia Museum of Art from Oct2ober 30, 2012 through January 21, 2013. Admission to this special exhibit is included with general admission ($14 for students).