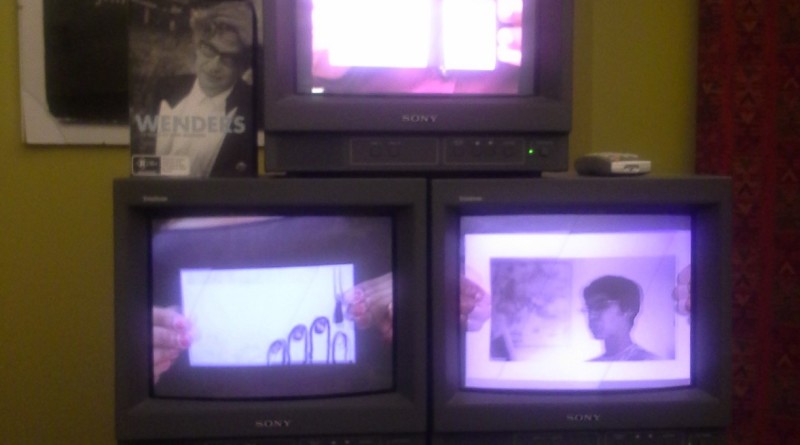 This project was based on the conceptual work by filmmaker Gary Beydler, most noted for his “Pasadena Freeway Stills.” Beydler filmed several shots of the Pasadena freeway, then printed every still on paper. He then filmed himself holding up each still, essentially “re-animating” the film.

For their first project, Visiting Assistant Professor Erica Cho asked her students to create their own version of Beydler’s piece. The assignment to take inspiration from Beydler added another layer to the assignment: because one can only see the film from the original stills, the students were not able to actually view Beydler’s piece. Instead, they read and researched what the film would look like. “Without seeing the film, how do you have a connection with the piece or the artist?” Cho asked. This question, Cho said, raised the issue of “what it means to ‘see it’ without seeing it.”

The other main purpose of the assignment was to familiarize students with simple methods of animation, hence the use of the flipbook style. Cho also wanted to acquaint students with a new stopmotion animation software, “without making the actual animation be so difficult.” All students were required to learn fundamental animation techniques; one student even chose to replicate Beydler’s method of “re-animation.”

In the theme of experimentation, Cho decided to install the pieces in the LRC. She wanted the assignment to include the element of nonconventional location, i.e., “not a single-channel projection in a theater.” When she found out about the CRT monitors available in the LRC, she decided to put them to good use. According to Cho, each monitor probably cost around $800. “Their image quality is better than consumer TV.”

The group worked together on how to best to place the monitors in conglomeration, creating one unified piece. However, each student’s concept was individualized.

Jay Stephens ’14, a Film and Media Studies and Political Science major, based her animation off her summer experience taking public transportation. Her piece (entitled “Subway”) depicts a girl whose hair gets blown back as a bus whooshes past, then seemingly subsumes her. “It always felt weird to me how suddenly they [busses]  would appear and sweep me away from where I was standing, and how little control over the whole process I really had,” she said. “My animation is about that tidal effect and the lack of actual connection to a physical place anyone truly has.”

At the end of the semester the class will present their final projects in a public screening. Many of the students, Cho said, have chosen to use these “Human Projector” animations as their “filmmaker calling card.”

This is the first time Experimental Animation Workshop has been taught at Swarthmore. It has provided a unique aspect of filmmaking not usually seen in the department: “The class straddles the technical and the creative,” Cho said.

For Stephens, who doesn’t plan on pursuing animation in the future, “taking a class with [Cho] this semester was a no-brainer and a great opportunity to learn some new skills.”

Cho will offer a twist on this experimental animation class at Bryn Mawr next semester. She will teach it at Swarthmore again next year, although which semester it will be offered has not yet been decided.

The class’s next project, entitled “Pull Curtain before Titles,” is an exercise in creating title sequence for an existing film or TV show. The pieces will be inspired by famous film title artist Saul Bass, who designed the opening sequences for films like Psycho, Man with the Golden Arm, and Vertigo.

The group will also travel to New York City this semester to see an exhibit at the Museum of Modern Art. The Quay Brothers’ work in stopmotion animation will be featured, and the students will get a chance to see professional work in the field of animation.

“The Human Projector” installation will be up for the next few weeks. To check out the individual pieces, visit the class’s vimeo site.