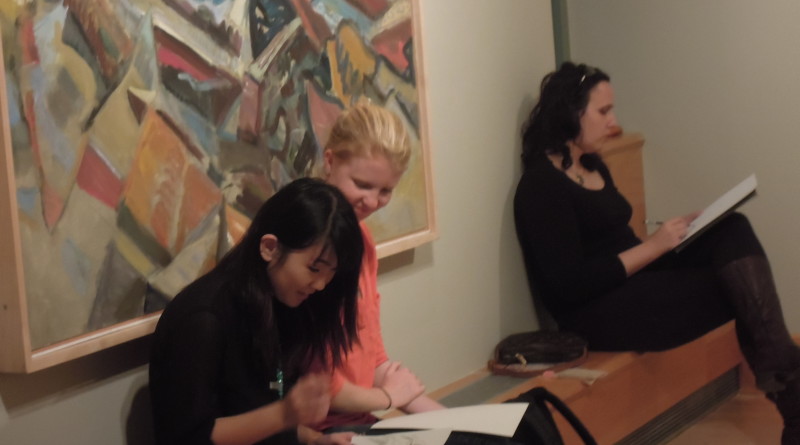 A group of students and adults sat on the floor of the List Gallery this Tuesday, carefully copying the broad, bold strokes of late artist Bernard Chaet from his seascapes adorning the walls. The exhibit “Bernard Chaet: Seascapes” ran from September 6th until October 23rd. The List Gallery offered a workshop open to the public both to honor the artist and provide a final opportunity to view – and learn from – his works.

The event, funded by the new T. Kaori Kitao Endowment to the List Gallery, featured a workshop planned and led by List Gallery interns Sarah Vogelman ’13 and Nicole Vanchieri ’13. The workshop was based on Chaet’s oft-taught book, The Art of Drawing. Most significantly, Chaet, whose work was highly influenced by impressionism, saw the artist as an actor, using basic skills as a jumping-off point for creative improvisation. He saw observation as only one element of art, which takes reality and revolutionizes rather than reproduces it.

Tim O’Brien’s bestselling 1990 story collection, The Things They Carried, lays out a similar view of art. The book, a chronicle of war and a riff on truth and fiction, explains how to tell an emotionally affecting story, how to turn a scene or an experience into powerful art. “What seems to happen becomes its own happening and has to be told that way,” O’Brien writes. “…there is always that surreal seemingness, which makes the story seem untrue, but which in fact represents the hard and exact truth as it seemed.” O’Brien makes it clear that storytelling, and more broadly, art, by necessity contains elements of abstraction, of sidelining pure observation for emotion.

Tuesday’s workshop was, at its core, an exercise to excavate and imitate the seemingness behind Chaet’s paintings, each work’s unique emotional significance. Vogelman and Vanchieri began the event by briefly summarizing Chaet’s life and work, from his education in Boston to his professorship at Yale and his countless exhibitions around the world, including New York’s Museum of Modern Art. They then announced that Chaet passed away last Tuesday. “We want to honor his memory, as the great artist and teacher that he was,” Vanchieri said.

Workshop attendees were given fifteen minutes to pick a painting in the gallery to copy in pencil as closely as possible. After reconvening and discussing the process, they were instructed to draw the scene again, this time from memory, without the aid of either the original or their own sketch. After the first fifteen minute segment, one of the attendees remarked that the process of copying was, in a sense, “abstracting the abstract…translating [the scene] a second time.” It was a “synthesis of what Chaet was seeing … doubly removed,” agreed Vanchieri. Everyone was forced to distill Chaet’s colors and subtleties into simpler shapes in shades of gray. Different people focusing on the same painting ended up with very different sketches, already seeped in subjectivity.

This abstraction was highlighted even more during the second segment by the added challenge of memory. Working from memory allowed everyone more freedom to create meaningful pieces, infused even more with their own styles and thoughts. When people stopped trying to get at what O’Brien calls the “happening-truth,” stopped trying to copy each line and shadow as it appeared, they were able to tap into what he refers to as “story-truth,” or emotional resonance and relevance.

Memory provided a necessary separation from the work under scrutiny, an automatic distortion, a beautiful fallibility. Everyone’s work became more loose, natural, and true as a result. “People were much more sure of their marks on the page,” Vanchieri said. Everyone’s second sketch contained, she said, “more of their own composition.” Vogelman agreed that “memory drawing is where your own interpretation of an object comes in.” Attendees noted that their images and shapes became less representational and more symbolic and meaningful. This exercise allowed workshop attendees to see the benefits of experimenting and extrapolating beyond pure observation. They were beginning to become the improvisers Chaet would have been proud of.

Clearly, all art, from painting to O’Brien’s war stories, is a kind of abstraction. Andrea Packard, the curator of the List Gallery and overseer of the workshop, pointed out that even so-called “realist” paintings must translate a three-dimensional scene to a two-dimensional, limited medium. This is “already a form of synthesis and reduction,” she said.

Art is also metaphor – the connection of two separate things, reality and its representation – in a way that elevates both subjects. Even though abstraction and metaphor do not provide perfect depictions of reality, they offer a different, arguably more important, truth. As O’Brien writes, “story-truth is truer sometimes than happening-truth.”

Chaet’s work clearly demonstrates this lesson. His turquoise and burnt orange clusters, his streaks of blue, like the sky falling, his deliberate and delicate reworking of familiar scenes into evocative portraits – in these paintings, nothing is real, and everything is.

Walking around the gallery after the workshop, observing the cluster of first and second sketches taped next to Chaet’s luminous originals, one was struck by the myriad of approaches, the wealth of perspectives. In the back room, two ripped-out pieces of paper are positioned beside a watercolor. The first drawing mimics the watercolor’s horizon, shapes, and scale. The second is a wide-eyed face, looking just a little bit sad. When this artist closed her eyes, trying to conjure up Chaet’s work, she must have seen this face looking back at her. This is what stayed with her, what stuck out, what lived on. This is her story-truth, her take-away.

In the end, art is all about what is translated – the mood, the message. “I want you to feel what I felt,” O’Brien writes, using words to get across fears and hopes and hurts. With his work, Chaet, too, tried to “retain a sense of emotion felt at the scene,” Packard said. Chaet painted seaside cliffs and waves so a viewer would see, and feel, something more. Maybe, why not, a face with the biggest eyes you’ve ever seen, looking right through you to the center.