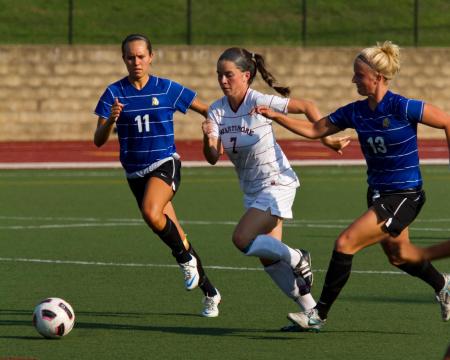 “You put a soccer ball in front of her, and suddenly she’s Superman,” he explained.

As one of only twenty-three freshmen to make the first team All-Centennial conference since 1993, it’s easy to see why Sindelar is one of the team’s most valuable players. The statistics don’t lie; only ten games into the season, Sindelar has taken 28 shots and recorded 11 points, putting her on pace to defend her title as the team’s leading scorer.  “On the field, Emma is a great player. I don’t think anyone can deny that,” Senior Captain Ari Spiegel ’13 said.

Sindelar’s success story is one with a positional twist – this is only her second season playing as a forward. According to Anckaitis, she played as a center defender throughout high school and as a midfielder at a Penn summer camp he coached at before her freshman season. Nevertheless, she’s managed to adjust and excel at a break-neck pace. “She has a nose for the goal,” Anckaitis said about her flexibility as a player. “I think she’s gotten a lot more confident around the goal.”

No matter how much Sindelar relied on her natural talent to transition to the forward position, she credited her teammates’ support most of all for her success. “Megan Brock ’14 was a great example for me last year because we played up top together,” Sindelar said. “She was supportive and showed me how to play the position by her own play. We have a weird connection on the field because we always seem to know where the other one wants the ball or where the other one is making a run.”

Not only is Sindelar respected for her innate soccer skills; she’s also admired for her smart playing style. She can score the big goals, and with 16 in 29 games, four of them game-winners, has done so.  But she also possesses a high soccer IQ. “She realizes the appropriate times to keep possession of the ball, which is something really noticeable and important when games are tight,” Spiegel said.

With her First Team All-Centennial debut last season, Sindelar feels the pressure from the spotlight. “I think there are definitely expectations about this year both from other people and expectations that I have of myself based on what I accomplished last year,” she admitted. “That’s a lot of pressure though, so I’m trying not to focus a whole lot on what happened last year but instead just work on doing well this season.”

Despite everyone’s fixation on Sindelar’s rising stardom, she constantly references her teammates as her source of inspiration. “All our seniors this year are also really great to play with. They’re hard workers and very positive and energetic. They’re great examples both on the field and in the locker room,” Sindelar said.

She also attributes them as the main reasons for her success; without their well-placed passes and perfectly-executed set ups, she wouldn’t have nearly the number of opportunities to find the back of the net. “I love to be played in and behind the defense when I’m playing up top and most of my goals have come off of great passes,” Sindelar explained.