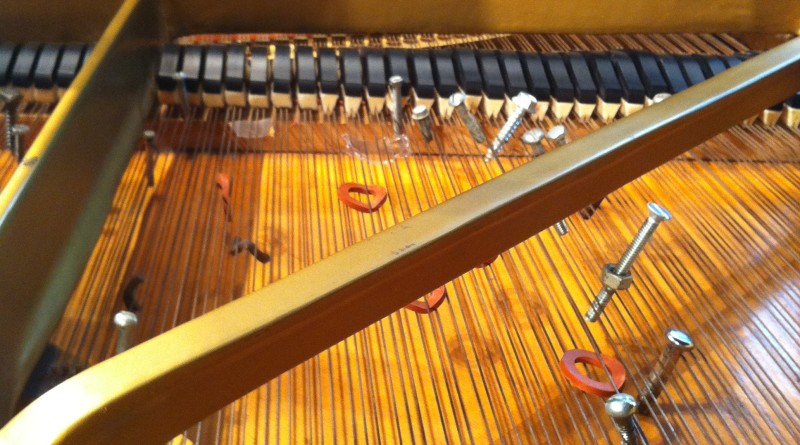 The John Cage “Happening” #3 was performed at Swarthmore on Sunday, as part of a larger series by Orchestra 2001, a Philadelphia-based performance group. The concert was preceded by a pre-concert talk to illuminate Cage, a figure sometimes mocked, sometimes revered, in the musical world. Mark Loria ’08 and Swarthmore Professor and Associate of Performance Andrew Hauze ’04 spoke in the pre-concert panel.

Cage, one of the most influential composers of the 20th century, is most famous for his piece 4’33”. In the piece, no notes are played, but the audience sits in silence and becomes more aware of the sounds around them.

Cage is known for the use of non-traditional instruments, such as bathtubs, radios, and makeshift percussion instruments, in addition to radical musical notation that gives great leeway in composing–his experimentation is not always considered music in the ordinary sense.

Orchestra 2001’s Artistic Director Jim Freeman said Cage is redefining the concept of sound. “It wasn’t going to be the way it used to be,” Freeman said. “He redefined what tonality was so you can reconcile it on your own terms.” Cage seemed to be not just a composer, but a philosopher of music, an inventor.

Loria and Hauze shed some light into performing Cage’s pieces for “prepared piano,” a technique they used in the concert. Prepared piano is not just your everyday keyboard–nuts, bolts, screws, rubber, and plastic are literally placed on the strings at precise measurements to create thuds, gongs, and metallic shrieks. Cage invented this concept when he collaborated with modern dance Choreographer Merce Cunningham. In small recital spaces, there was no room for percussion instruments, and this was a creative way to combine the two and create new, interesting noises.

“It’s great fun and a fascinating experience to find how to work with these sounds,” Hauze said. “I’m excited and surprised to hit a key and not know what sound will come out.” Hauze said he was also surprised how much musicality was inside these pieces.

The pieces for prepared piano “Sonatas IX-XVI” (1946) and “Interludes III and IV” were beautiful. In these solos one could hear sounds of gongs, tom-toms, clocks, drum rolls, and other unexpected sounds. It reminded one of an electric piano set on the percussion setting, rolling one’s hands up and down the keys to hear different honks and beats. At times the prepared piano sounded like a dilapidated music box, slowing time into a gooey repetition that would be interrupted by a thud. The silence prolonged the power of these sonorities.

Other pieces on Sunday’s program included other bizarre instruments. The first piece, “Inlets for Four Conch Shells and the Sound of Fire” (1977), involved rotating three conch shells filled with water, creating a blubbing noise. A recording of fire was piped through speakers and, to close the piece, a fourth conch shell was blown like a horn. Without the title, the piece resembled static noise.

“Credo in Us” (1942) featured several orchestral recordings of Tchaikovsky which were occasionally overlapped by keyboard, buzzer, and percussion (which, upon closer examination, were beer kegs and tin cans). This created a symbiosis of old, expected sound, and atonal interruptions. Though cacophonous, these other instruments still followed a rhythmic pattern and repeated ostinatos. The piece may have been radical to a listener who prefers Mozart, but it still had form.

Another atypical piece, “Aria” (1958), was interesting for its vocalizations. The piece is notated with squiggly lines indicating pitch level, and colors indicating what voice the singer should sing it in: shrieks, “Broadway voice,” alien tones, operatic tones, whispers, nonsense buzzes–all at the singer’s individual discretion. This means that every performer makes the piece extremely personal. It was an exhibit of theatricality.

Moving further away from traditional instrumentation, the audience was also shown a video of John Cage performing his piece “Waterwalk.”  With a completely straight face and an unassuming character, Cage goes about his everyday chores of watering plants, making himself a drink, preparing dinner, and pushing radios off a table. It is obviously humorous to us as an audience. But with Cage’s straight face we wonder if he takes himself seriously, if he thinks of his composition as performance or music, or both.

The sense of discovery in these pieces correlates to a Swattie curiosity. We’ve all heard the musical classics, or more broadly, the expected things.  But when we stretch our ears to try to understand or at least accept music like this, we broaden our horizons and perhaps find zen in the unexpected.

And if we decide we hate it? At least we have something to laugh at when Swarthmore seems too crazy. After all, Cage himself said, “I rather have people laugh at my pieces than cry.”