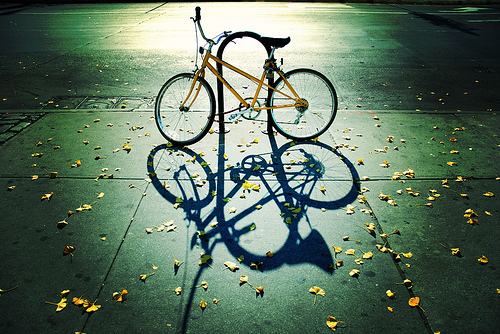 Here is a story about a traveler in America: there was a man in Detroit and he needed to take a piss. He couldn’t find a single place open, there was block after block of foreclosed buildings, there was nowhere he could go; and it was Saturday, even, the afternoon. He walked & he walked & he walked & finally he came to the Hard Rock Café Detroit & they were open. So he went in & he took a piss & on the way out they said to him: we’re closing for good tomorrow. You can take anything you want off the walls.

Another: there was a man who was riding his bicycle through the Blue Ridge Mountains. North Carolina, middle of nowhere, not a soul in sight. & he needs to take a piss, so he leans his bike against a tree and bushwacks off the road. He hears voices. & so he walks & he walks & he finds a bunch of startled naked teens and one, clothed, with a video camera.

I have, in other words, set off for New Orleans by bicycle.

My reasons are simple. Academia was filling my head with many interesting things—so many, in fact, that a number have already fallen out along the way, leaving a little trail of Foucaults and Heideggers behind my bike to fend for themselves in the wilds of New Jersey.

It was just that, after two years at Swarthmore, my head began to grow very tired, my belly very full from the decadence of the local dumpsters, & meanwhile, my legs were turning into month-old-pumpkin-soup, my hair was growing shorter, & my eyes were bored again and again to tears for wont of a new face, new street, new lay of land. Kundera: a person who longs to leave the place where he lives is an unhappy person.

I had to leave our dear little two-street town; but what I longed to both leave and reach into was everything I know and hate about America and Americans. My head may have shed itself of the weight of specificities, but there remains the overwhelming, ongoing history of oppressions, the isms as far as the eye can see. This is the story of a traveller in America, in the act of a confrontation with America.

So I am going South, to the racialized soil, the 49-cent grits, the land of prophecy trucks & Walmarts & slow-moving rivers. If this sounds romanticized, it is only because I have not been there yet. What I know of the South comes to me from Faulkner, the drudgery of my various American history classes, and the photographs of Walker Evans.

I am one very small, very mobile Occupy America, consisting of one girl, one bicycle wearing orange saddlebags by the name of Alexander, and one jar of sourdough starter, who has not yet been christened.

THANKSROLL:
All you lovely people of Swyrthmore for the surprise bonfire, Mommy & Daddy for planting the seeds of my wanderlust, Sarah for hosting & feeding me & rescuing me from that triangle of grass in front of a Domino’s in the growing dark, everyone at Latona Country Club for letting me pitch my tent & Dorothy for feeding me a slab of cake (so big it was practically ¼ of a cake) & a glass of milk & trying to give me money for a motel & then making me breakfast, Ocean City for being so full of surrealist mini golf courses, Cindy, Karen & Tim for letting me pitch my tent, that dog for not chasing me for too too long, some church between Whaleysville and Pittsville for letting me camp by it, the Leavells for also rescuing me from the dark & sheltering & feeding me & giving me proper biker gloves & getting me to Annapolis, Kathy for rescuing me from the mega-highways/ WaWa parking lot where I was stranded & for giving me her lucky bracelet, Bonny for feeding & housing me & granting me clean clothing (!), the various strangers who have given me directions, water, use of bathroom.