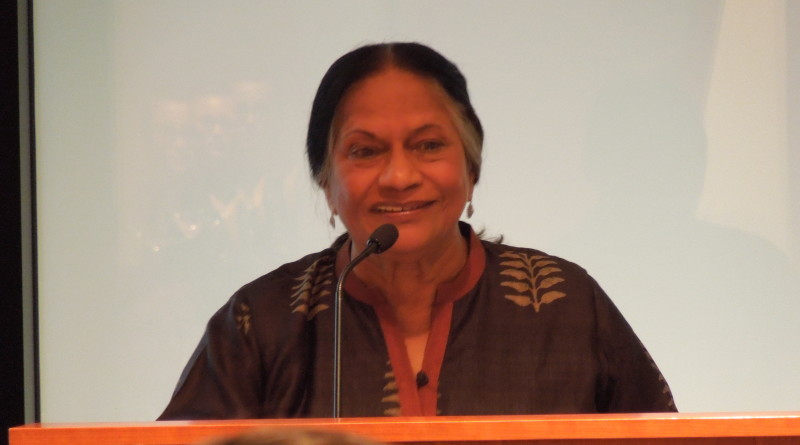 Visiting Dance Professor Kumudini Lakhia filled the Scheuer Room last Thursday with faculty and students eager to learn about the origins of Kathak and about Lakhia’s career as dancer, choreographer, and pioneer in contemporary Kathak dance form.

Lakhia’s presentation focused on both the geographical and cultural origins of Kathak as well as the conventional standards of dress, composition, and form. Many of the images and videos in the PowerPoint were taken over the years of her career, documenting both the traditional constructs of Kathak as well as her innovations to the art form.

Visuals ranged from the vibrant and distinct garb of authentic, Northern Indian dress to the works of contemporary luminaries. “The visuals were especially interesting and helpful in understanding the art form,” said Tiffany Barron ’13, who has taken Kathak before and plans to take Lakhia’s Kathak class next semester. Towards the end of the lecture, Lakhia presented a series of short clips of her own work indicating the various aspects of Kathak dance composition, such as the beginning invocation and footwork.

One could not help admiring the unison amongst the dancers in Lakhia’s clips. The dancers, mostly female, possessed the unmistakable grace and expressive nuances of traditional Kathak dancers at the same time adhering to more contemporary standards of dance. According to Lakhia, Kathak is similar to other types of Indian dance in that it is “grounded,” with low movements and complicated, interesting footwork. It distinguishes itself, however, in dancers’ straight bodies and fast movements, akin to ballet.

From the texts to the proscenium, the dancers enthrall viewers with dynamic forms, graceful lines, and above all, their animated expressions. Despite Kathak’s ancient heritage, the dance form has continued to thrive and appeal to modern tastes with the help of modern-day innovators like Lakhia.

Kathak is one of the many forms of classical Indian dance, but specifically owes its beginnings to India’s rich tradition of storytelling. Dances are choreographed around poems and epics, drawing on the wealth of folklore and literature that permeates Indian culture. “Every dance form has a language attached,” Lakhia said in a phone interview. Kathak differs from other forms of Indian dance, she said, because each form comes from its own locality, with its own language, “life of the people, religiosity, and climate.” Kathak is also unique in its foreign influence. Located in northern India, Kathak was subject to foreign invasions throughout history, which had a “strong influence on the dance,” Lakhia said.

Lakhia has had a lifelong history with this dance form. “I was trained as a child in Kathak dance,” she said, and was later trained as a professional. “I just got into the profession and didn’t look back.”

Lakhia founded the highly-selective Kadab Center for Dance in India, which draws students from all over India, America, and Europe.

Though Lakhia no longer performs, she still teaches at the dance institute. She has been teaching there for 47 years. Lakhia also founded a Kathak dance company, which still performs in India and all over the world. At present, she said, the group is performing in Spain.

Even after seventy years studying, teaching, and adapting Kathak, Lakhia still strives to pump new blood into classical Indian dance. Her past – deeply rooted in the orthodox traditions of Kathak dancing – is surprising given her avant-garde approach to the art form she has dedicated her life to.

“I really admire the way she [Lakhia] strove to break the mold – she moved away from her guru to experiment with new techniques like the color white – since Kathak traditionally incorporated bright colors,” Barron said. “She also was the first to choreograph group pieces and storylines that were down to earth, the kind middle class woman could relate to.”

According to Lakhia, her goal was to, “separate the body from the script” by creating and designing new forms of Kathak that emphasized emotions and favored unconventional storylines over the traditional repertoire.

Lakhia fondly recalled her first attempt at choreography in her groundbreaking dance, “Dhabkar” or “Pulse,” where she began experimenting with tempo, movement, and the utilization of space in the likes never seen before. In addition to “Dhabkar,” dances like “Duhvida,” “Atah Kim,” and “The Coat,” whose themes range from female autonomy to the life of a sorry coat, were pivotal in the modernization of Kathak form.

Stylistic and thematic innovations are the cornerstones in Lakhia’s success. However, it is her ability to accept and even look forward to the evolution of dance that sets her apart from her contemporaries. The great myths and epics of India’s great bards certainly have their place in history, but they are simply not relevant in this high-tech, globalized day and age. As Lakhia put it, “No one wants to hear about the rain coming down and watering the plants anymore.” While this attitude incites criticism from many Kathak purists, Lakhia understands that dance, like all living art forms needs to be relatable for both the present and future generations to come.