Arts & Features » Reflections on Florence and the Machine: a Journey to Camden 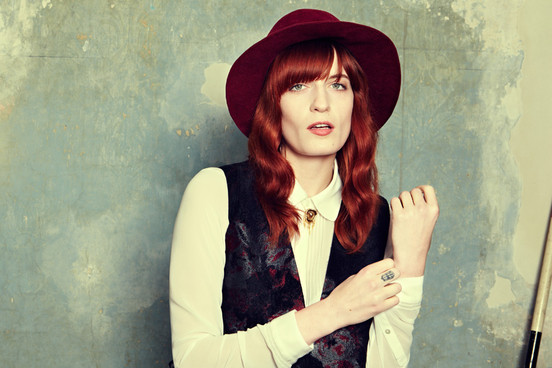 “We are Florence and the Machine, and we demand human sacrifices.”

So began an electrifying concert at the Susquehanna Bank Center. Florence and the Machine, an amalgam of musical styles headed by British vocal powerhouse Florence Welch, had a point to make. In her opening spiel, Florence mentioned the Camden venue’s proximity to the City of Brotherly Love, a city that embodied the main themes of the night: communion, unity, and above all, passion. She asked neighbors to climb onto each other’s shoulders, to introduce themselves, to hug, to sing along, and to dance. As the group delivered song after fiery song, her commands became easier and easier to obey.

The headlining group was preceded by two opening acts. The Maccabees, darlings of the British indie rock scene, delivered a disappointing set. Their excessive use of percussion and bass, in addition to superfluous strobe lights, undercut whatever musical merit might have been there. Although a few catchy choruses could be detected, the rest of the Maccabees’ performance was muddled and lacked subtlety.

Up next was The Weeknd, the stage name of alternative soul artist Abel Tesfaye. The group made up for the previous act’s disappointment. The Weeknd embodied the feminine, haunting croon of Frank Ocean, one of their R&B contemporaries (think “Channel Orange” minus the lyrical dexterity). His voice was lifted further with the help of two strong back-up vocalists. Despite his strange attire – a puffy silver jacket on a hot stage – The Weeknd managed to exude sex appeal. With Elvis-like hip movements and startling vocal range, he brought a restless audience back to attention, even a delighted hypnosis.

Florence and the Machine opened with the vocal heights of “Only If For a Night” and went on to perform most of the major hits, many from the album “Ceremonials” and a few from “Lungs.” When Florence and her band took the stage, they delivered with each song. From “Cosmic Love,” when Florence pushed her voice to its animalistic limits, to “Spectrum,” when she laid down the chorus like a victory speech, to the second and final encore, “Dog Days Are Over,” when I felt the dying of August, those dog days of heat,  hit me all at once.

The show, overall, was operatic but honest. It was a sensual experience – in its sexuality, but also in the stimulation of all the senses. You realize, at some point, that it’s all worth it – the two train rides, the walking through the rain, the hours of openers – for that moment when you’re in midair and singing along and so are a thousand other people and the lights are going and a wind has just come across the audience, reminding you that you are outside and the primal takes over, and you time the tapping of your feet and swaying of your shoulders to the beats you are just starting to understand.

Yes, I entered the concert hall a Florence neophyte but left a devotee. I had done my fair share of solo youtube sing-alongs to “Shake it Out” after hearing the group perform it on Saturday Night Live, but other than that, I was a blank slate.

A mirrored and light-drenched set provided a kaleidoscope of a backdrop, shifting in and out of different whimsical patterns, which overlapped live video of Florence’s whipping hair and hippie swaying. Two screens on either side of the stage also captured her theatrics, including her signature move – a skyward gaze, neck thrust to the crowd, the opposite of a deep bow. Florence twirled and ran. She flowed, and so did her green dress and red hair. She was ethereal, and so was her music – a deep, emotional gospel-meets-rock-meets-quirky indie.

What really stood out at the end of the night, however, were the highly relevant lyrics of “Only If For a Night”:

“And my body was loosened, I was set alight…

And I heard your voice as clear as day

And you told me I should concentrate

It was all so strange

That a ghost should be so practical

Only if for a night.”

While the title phrase serves as the perfect motto for crossing state borders on a weekday evening, the rest of the song explains why such a risky act is, sometimes, completely worth it.

One thought on “Reflections on Florence and the Machine: a Journey to Camden”