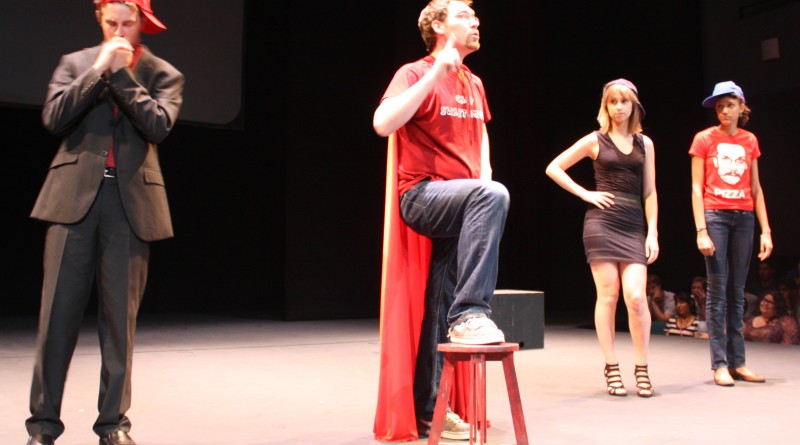 Lights went up on the Orientation Play this Saturday, which continued its annual role of the pinnacle of freshman orientation week. A staple of Swarthmore, the play encapsulates everything quintessential about Swarthmore and students’ first week: roommate troubles, misery poker, and the “admissions mistake” were present as usual, along with a few more current jokes.

This year’s play was successful as a timeless classic, spiced up by a new cast and an updated script. Directors Elliot Weiser ’13 and Patrick Ross ’15 accomplished what seems impossible: they used (almost) the same script to mock Swarthmore in a way that provoked freshmen and upperclassmen alike into uproarious laughter.

The two directors introduced the play in an original skit, involving Ross’s fictitious romantic interest in President Rebecca Chopp. The play continued into the familiar script we know and love about the admissions mistake and trying to navigate one’s way through freshman year.

Weiser said that though the script basically stays the same every year, it also undergoes its fair share of changes. He said that depending on who gets cast, “We need to cater to the needs of the cast, so the script encountered several re-writes.”

Of course, the 2012 edition included a plethora of hilarious pop culture references. Dr. Who, Harry Potter, and Call Me Maybe made a few notable appearances. Mean Girls even made a cameo: Avery (Audrey Edelstein ‘15) asks her roommate Christina Martinez (Meryl Sands ’13): “If your last name is Martinez, why are you white?” Christina’s rejoinder: “Gosh Avery, you can’t just ask people why they’re white!”

The showstopper was the token summer blockbuster reference: A “Swatman” parody of The Dark Knight Rises. The video featured Leslie (Josh McLucas ’15) as Swatman, a combined mockery of his two namesakes. In one scene, with the Joker (Ross) at his throat, Swatman asks: “Why are you trying to kill me, Slacker?” Classically, the Joker responds: “Why so studious?”

The Batman parody was initially intended to include footage from President Barack Obama. In the original 2010 script, Swatman finds a document called “Obamacare: So Not Just Socialism.” Obama comes on the screen and declares: “I got this, Swatman,” who replies: “Thanks, Mr. President.” Unfortunately, the White House denied Weiser’s request for this footage.

Aside from pop culture references and cast needs, Weiser said he felt that the script had changed to reflect himself as well. “It’s been a collaborative writing process. I’ve imbued myself into the script. I fell in love with the script, the story, and how funny it is.” Weiser has acted in the play since his sophomore year and co-directed for two years.

Regardless, life at Swarthmore is at the heart of both the serious and humorous sides of the play. The Swarthmore jokes, said Weiser, never get old. “Everyone can use a good roast of Swarthmore because we’ve dedicated time and energy to Swarthmore and we owe it to ourselves,” he said.

The Orientation Play is “a testament to how funny we can all be: we’re all willing to have a good time and drop everything,” Edelstein said, the message for her being: “don’t take things too seriously, especially not yourselves.”

Edelstein said that acting in the Orientation Play this year, looking back on her experience as an audience member last year, was impactful for her. “It’s cool seeing this end of it,” she said. “I love reading the script, and remembering last year. Now I have a more complete picture . . . I’m excited to be what I saw.”

This year’s show encountered a few unique hurdles. According to Weiser, the show’s film director fell ill just before orientation week. Ross then took on the added responsibilities of filming and editing.

Beforehand, the directors had attempted to arrange for an invited dress rehearsal on Saturday afternoon, to provide upperclassmen an opportunity to see the show. “Many upperclassmen came early just to see the Orientation Play,” Weiser said. “I really wanted to find a way to cater to both audiences. Though I failed, I think if we plan enough time for one night for the upperclassmen, the next night for the freshmen,” he said, the double-performance might be allowed. He said he thought it was denied this year because “there wasn’t enough time for logistics.”

Correction: The original Dark Knight script was written in 2009, not 2010; Elliot Weiser did not take part in writing it. The idea to use footage of President Obama was conceived this summer in response to the Supreme Court ruling the Affordable Care Act as constitutional.

One thought on “Orientation Play Socializes Freshman to Swat Life”