College » An Education in ‘The Politics of Punishment’ 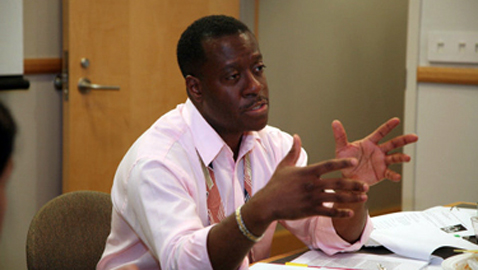 You are sitting in class, listening to your classmates exchange ideas on readings. All of a sudden, you hear an announcement over the PA system – and you remember that you’re not in Trotter, where most political science classes are held. You are at the Chester State Correctional Institution (SCI), a medium-security, all-male correctional facility devoted to inmates with substance abuse issues, just a fifteen-minute car ride away from Swarthmore.

The fifteen Swarthmore students in the political science course “Politics of Punishment,” taught by Professor Keith Reeves ’88, take weekly trips to the Chester SCI. Once they get past security checks, the group meets with fifteen “inside students”: they hold a seminar for the inmates on “the interplay among American electoral politics, public concerns regarding crime, and criminal justice policy,” as the Swarthmore course listing explains.

“We’re looking at the criminal justice system, what prisons are for, why do people commit crimes […] We’re learning a lot about the intersection of crime and criminal justice,” said Reeves, as well as “alternatives to the punitive sentencing the country [engages in].”

The course is more largely facilitated by the Inside-Out Prison Exchange Program, a fifteen year-old program headquartered at Temple University. Approximately 100 schools and 10,000 students have participated countrywide since its first class in 1997.

The course stems from the interests of Swarthmore students who pressed Reeves to teach a course on incarceration. Reeves has conducted extensive research on black male imprisonment, and teaches the honors seminar “The Urban Underclass and Public Policy.”  Reeves selected the students, both inside and out. Walking in the the facility, “we look like the UN to be met with the Rainbow Coalition,” Reeves said. “It’s just an extraordinary group of students.”

Professor Reeves and co-facilitators Tom Elverson ’75, an Alcohol Education and Intervention Specialist with incarceration-work experience, and Karlene Burrell-McRae, Assistant Dean and Director of the Black Cultural Center, accompany the students to SCI.

“So often students don’t recognize how privileged they are, just being in a space where they get to be intellectual, they have the opportunity to think about issues from all different angles. There’s privilege in that when people are dying from HIV and there’s homelessness,” stated Burrell-McRae.

Reeves said that “real, true collaborative learning was taking place” in the facility. In fact, “the inside students are as prepared if not more prepared than the outside students,” he said. “If there was a different opportunity for each of them […] some of them could have been Swarthmore students or students at an institution like this,” Burrell-McRae said.

The lesson everyone takes away is that “there is humanity in everyone, even those that have made mistakes and great errors of judgment. You see their genuine remorse and forgiveness,” Reeves said.

The course culminated with four projects proposing changes to the local criminal justice system.  Groups are working on how to restore eligibility for Pell grants for those incarcerated, design a state of the art mental health unit for three new Pennsylvania prisons, create a new social civil rights movement that deals with mass incarceration crisis, and design an adult drug court in Delaware County. Students hope to affect change through the projects by garnering support for their proposals from interested leaders in the community, like attorneys, judges, or politicians.

Reeves said that he feels lucky to be able to apply Swarthmore’s intellectualism to “some spaces where we can interact with some real-world problem solving,” said Reeves. “You also see that the students sitting next to you have really changed.”

Lehmann said, “for the inside and outside students alike […] education is not something that you can really take away from a person, and it’s one of the biggest forms of social capital. Education is something that is actually able to change peoples lives.”

“They’re always telling us a phrase like ‘change the world!’” Lehmann said, who can now instead say: “I have faces, I have stories, I have these relationships.”

The outside students from “The Politics of Punishment” will be debriefing and presenting their final projects from the class on May 1st in SCI 199 from 2pm to 4pm.