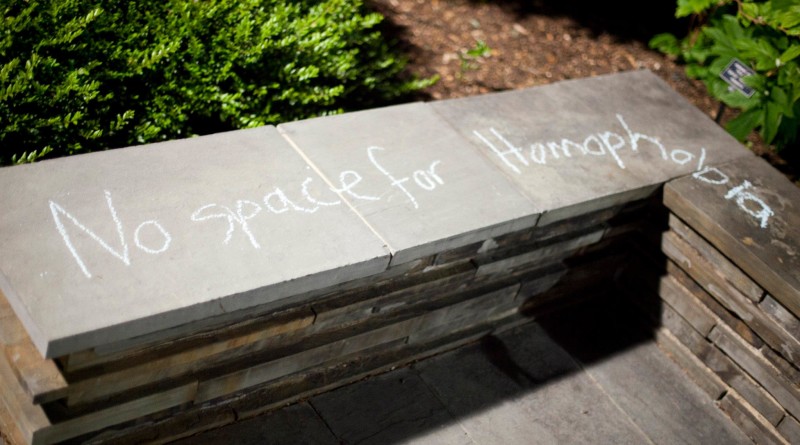 On Friday night, students responded to the hate speech chalking found in Worth Courtyard by reclaiming campus sidewalks and buildings.

The chalkings currently cover the space in front of Parrish and McCabe, as well as Sharples, the Science Center, Magill Walk, and other high-traffic areas. Most of them convey positive messages about acceptance — “love is love, show some!”, “homophobia stops here” — but several express anger at the administration and the straight community (“queer specs: run!” and “fuck breeders”).

The overall goal of the chalkings, according to a widely shared student email sent by Andrea Jacome ’14, was to communicate that “this behavior [hate speech] is not okay… let’s try on some level and bring this conversation out, aggressively and explicitly… si se puede!”

Five other students responded Friday by writing an open letter to Dean Braun and President Chopp. Ian Perkins-Taylor ‘13, Gabe Benjamin ‘15, Kenneson Chen ‘14, Jonah Wacholder ‘13, and Joyce Wu ‘15 proposed in their letter that Braun and Chopp “give a 15-minute campus address on Parrish Beach this Monday” to highlight “the impact that a violent threat such as this one has on not only the physical safety, but also the mental and emotional wellbeing of community members.”

Students and alumni who would like to show their support for the proposal are asked to view the letter and sign it.

Update 4/30/2012: Chopp Calls for Entire Community to Attend “United in Safety and Justice.”