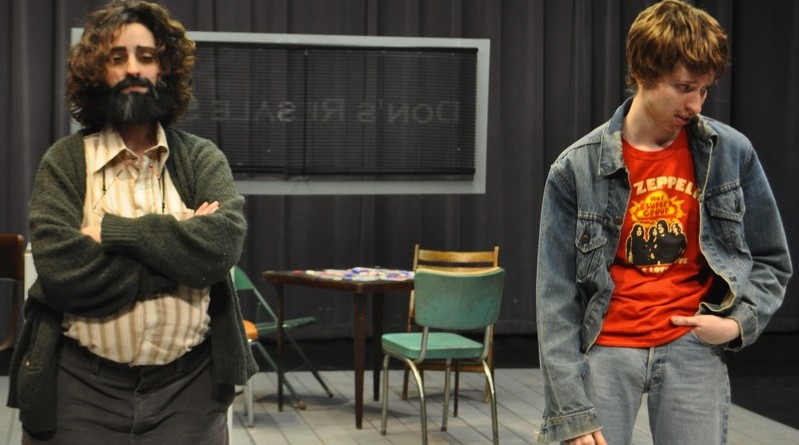 The lights go up on a starkly-lit shop littered with antiques and rubbish. A guitar hits a chord as the three characters take the stage. Scraggly and haggard, these men’s scruffy facial hair and sloppy clothing seem to fit into the scenery. They boldly strike a pose, presenting themselves to the audience from all sides, the tough expressions bespeaking years of hardened manliness. Slowly, however, one begins to realize: Don, Teach, and Bob are not men at all; they are Lori Barkin ’12, Jessie Cannizzaro ’12, and Michelle Fennell ’12.

Barkin, Cannizzaro, and Fennell star in this three-(wo)man show as their Honors Acting Thesis. The play, American Buffalo, is written by David Mamet and directed by Alex Torra. It centers around three lower-class men in Chicago, Il., conspiring in Don’s pawn shop to steal a buffalo head nickel from a well-to-do coin collector. American Buffalo explores ideas of morality, good and evil, and masculinity.

The direct representation of characters and the theme of masculinity make room for a great amount of experimentation. “Part of the reason we picked [this play] is that Mamet always writes these hyper-masculine, low-class men,” Fennell said. “With the exception of blackface, this is probably as far as we could get from ourselves.”

American Buffalo has provided the three actresses the opportunity to explore a whole new dimension of acting: portraying men. “We have our entire lives and careers to play moms, to play wives, to play sisters,” Fennell said. “You’re only in a relation to a man, almost always. Why are we going to just do another [play about men]?”

The difficult aspect of the script itself was, for Fennell, not portraying a man. “I find that playing a man is not very hard,” she said. “This project has enlightened me to the fact that men aren’t all that different from women. The difference is exaggerated but there’s still a difference, and I know that I can play that difference.”

The process of exploring gender has provided insights into acting. For Barkin, the show “further reinforced for me that gender is performative. You can perform masculinity; you’re not born with it.” In performing gender, Barkin said, she has become more aware of gender in her own actions. “It’s interesting to notice what mannerisms or tendencies I have that are distinctly female, what are masculine, and what are neutral,” Barkin said.

Fennell said she noticed a reversal of the “male gaze” phenomenon. “I have a weird tendency, more than in any other show, of seeing myself from the outside and watching myself, which is funny because as a woman we’re supposed to be doing that all the time,” she said.

Another challenge presented itself in this particular rendition of the show. Torra, the director, cast the show based not only off of character portrayal in addition to the challenge that each portraying a given character would present to each actress.

While the actresses experiment with gender, Torra has manipulated the form of the play. Mamet, who is typically known for a hyper-realistic style, has been shifted to a more presentational form. Most of the dialogue in the first act is delivered directly to the audience. The performance becomes more and more realistic as the show progresses, culminating in a dramatic, touching conclusion.

Barkin said she would like to experiment with a more realistic rendition of masculinity. “We know and you know we are women dressed up as men,” Barkin said. “It’d be interesting to then progress to living and breathing as men.”

The non-realism adds another level of complexity to the performance. “So not only are we playing characters that we probably never would play on like two different levels, we’re also not playing the script as it’s usually played,” Fennell said. “Keeping that all in your head at the same … time is the biggest feat of mental gymnastics ever.”

The Acting Thesis project has provided the three a limited-time opportunity to take full advantage of these challenges. “We’re going play women for the rest of our lives in the industry and in theater,” Barkin said, adding that the play provided a chance to break away from the “four categories” of female parts: “lover, vamp, mother, or suffering wife. And these are four parts I know I will play for the rest of my life.”

The show ultimately provided the actresses with new tools to take with them in their acting careers, including physicality and vocality, as well as ideas about gender and realistic portrayals. “I feel like this project has given me a little bit of confidence in knowing that I’m capable of playing more than just a slight variation of myself,” Fennell said.

American Buffalo takes the stage this Saturday and Sunday, April 21 and 22, at 2 p.m. and 8 p.m. in the Lang Performing Arts Center’s Frear Ensemble Theatre.