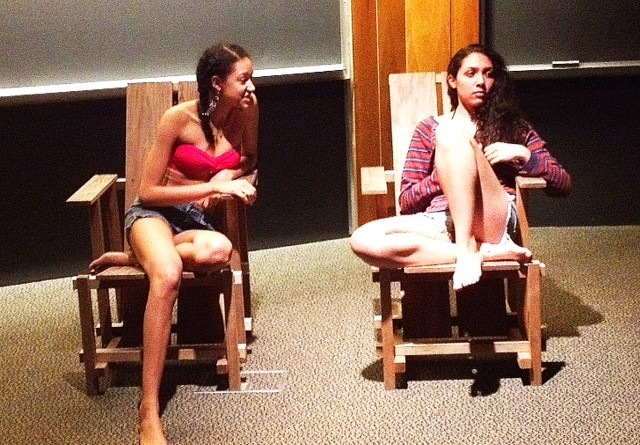 How do a gay librarian, a spinster school teacher and a darkly comical man of many hats fit into the same play? In her Directing Honors Thesis Baltimore Waltz by Paula Vogel, director Michelle Fennell ’12 ties these elements together with painful twists and turns, metaphor, and witty humor.

From the sterility of hospital waiting rooms to the cities of Europe, the show explores the endearing relationship of a brother and sister and the cloud of an incurable disease that hangs over their lives.

Fennell first came across Baltimore Waltz in a play analysis class before coming to Swarthmore. The show’s difficulty piqued her interest.

“It was one of the first scripts I could not visualize in my head. When I find I can’t do something, it sticks with me,” she said.

Fennell accepted the challenge: she wanted to direct something “not inaccessible, but almost inaccessible to me,” Fennell said. “I wanted to pick [a play] that scared me, one I could grow from.”

For dramaturge Kari Olmon ’13, that challenge has been in balancing comedy and tragedy. “It’s a light, frolicky atmosphere, but you have to understand the gravity of the history behind it,” she said.

Baltimore Waltz was written in 1988, shortly after the playwright’s brother passed away. This autobiographical aspect presents its own challenge: “[Vogel is] writing about her own present,” said Olmon. “1988 appears as a historical memory, but it was a very real present for the characters. It’s a fun challenge.”

Olmon has helped Fennell to “link the symbolic, allegorical moments with the real history that influenced them,” said Olmon.

The tragedy of the illness as represented in the show provides a commentary about government institutions and medical infrastructure, as well as those suffering and their family and friends.

Ana (Alexandra Izdebski) and her brother Carl (Sam ‘Swift’ Shuker Haines) give a life and reality to the illness. One cringes with Ana from hospital room to hospital room, chuckling at her escapades along the way. Carl and his efforts evoke a visceral sympathy, as well as a sense of obscurity and darkness throughout the show. (Combined with the Third Man [Ben Hattem] and an unexplained stuffed rabbit, the mystery is complete, you have to see the show to understand!)

In the play’s truly striking surprise of a dénouement, one’s stomach sinks in the face of tragedy, reality and shock.

The reality, says Fennell, comes with the characters’ relatability. Unlike other pieces about similar issues, Baltimore Waltz’s protagonist is an adult, white, straight, female schoolteacher. The play takes an idea that is seemingly inapplicable to, or incompatible with, the average audience member’s sense of self, and “filter[s] it through this person who anybody who’s anybody can relate to and sympathize with,” Fennell said.

Fennell’s thesis is, however, more than serious and terrifying. “There’s a lot of social commentary,” she said. “The satire is ripe in the show.”

Even beyond that, the actors bring to light some incredibly humorous elements. “We also play a lot, because Paula Vogel plays a lot, with farce,” Fennell said. “It’s hard to define as a social commentary piece because it’s so much funkier than that.”

The piece also features an impressive amount of student input. This is the first time both set designer Eric Verhasselt ’13 and costume designer Ryane Disken-Cahill ’12 have designed a piece at Swarthmore; this is Olmon’s third time this semester dramaturging an Honors thesis; and the cast is entirely composed of students.

“It was a huge undertaking for each actor,” Fennell said. “This was something they could really sink their teeth into. I just wanted something that gave people the opportunity to do something really weird, something they were scared of.”

Baltimore Waltz is indeed something to be scared of, but it is also a piece to laugh along with, a piece that makes you ponder: what if this were me?