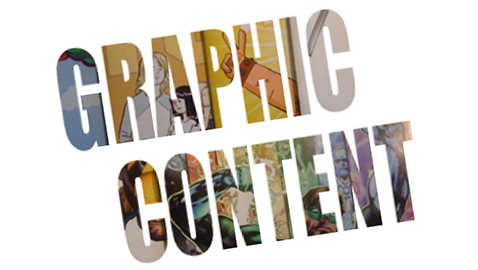 The first volume of the acclaimed self-published black-and-white comic series Strangers in Paradise, written and drawn by Terry Moore, begins with that melodramatic line from a high school play. We are introduced to two best friends: naïve, misfortunate Francine and rebellious, sharp-witted Katchoo. Their brief backstage conversation ends when Francine goes on stage — only to have her toga fall off, leaving her in only her underpants in front of the entire school.

In a tribute to cinematic and theatrical conventions, that panel ends with the narration “fade to black” and the next page opens with a nighttime “negotiation” between Francine and her sleazy boyfriend Freddie, in which she denies his drunken requests for sex, and Katchoo, now living upstairs, yells at them to be quiet. Francine is still naïve and misfortunate, and Katchoo is still sharp-witted and rebellious. We’re introduced to sleazy, self-centered Freddie and quiet, sensitive David. David is in love Katchoo, who’s in love with Francine, who’s in love with Freddie, who’s in love with himself, mostly.

The amount of melodrama in the plot and the way characters seem to be codified caricatures of common tropes was initially off-putting. Francine is a kind girl who just wants a man; Katchoo is a man-hating lesbian; Freddie is a sleazy man who thinks with the head between his legs; David is a sensitive boy too shy to speak up. Perhaps because of the prevalence of sexism in comics, I expected Katchoo to be set up as a straw feminist and mocked for overreacting because women have too many feelings. However, Moore manages to imbue his over-the-top plot elements — Katchoo shooting her alarm clock, Freddie bound naked in clown makeup — with a complex set of genuine emotions between the characters.

The character’s reactions may seem exaggerated by real-life standards, but everyone is equally melodramatic, giving everyone’s opinions equal weight. Moore manages to write women being crazy without implying that all women are crazy; he writes men as creepy without implying that all men are creepy. For example, Katchoo’s willingness to do violence against men seems initially excessive, but when she is later sexually harassed in a holding cell, her equally physical response of punching the crooked cop seems reasonable and justified. Francine is something of the stereotypical woman-lost-without-her-man when she discovers that Freddie has cheated on her, but when forced to choose between him and Katchoo, she chooses Katchoo in a heartbeat.

Moore has somehow managed to write characters with cliché qualities, while retaining a sense of individualism and avoiding a sense of representationalism. The characters are exaggerated but genuine, and Moore conveys a real sense of love between them (sans Freddie) despite their dysfunctions as people and inspires a great affection in readers for them as well. He tells the extraordinarily ordinary stories of everyday people with alternating humor and seriousness, and always with a great honesty. The Collected Strangers of Paradise, Volume One is available at McCabe.