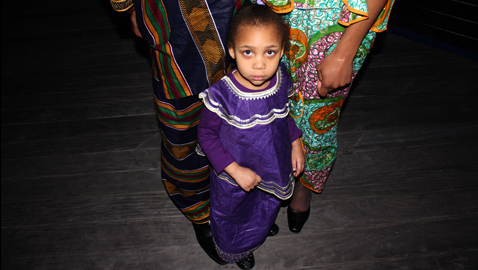 Let’s pretend that I don’t really know you at all. What’s your major and what do you do at Swarthmore?

My major is Visual Ethnography, which is a special major in Soc/Anth, Film, and English. I’m one of the co-booking directors for Olde Club, I work in the Media Center, and I’m a library intern this semester in McCabe.

So you have a blog (Invoke the Dope) and a video series (Invoke the Series). Can you explain what they are and how they relate to one another?

I started Invoke the Dope as a way for my mom to keep tabs on me in college, especially while I was abroad, and then it extended to my friends from high school keeping tabs on me, and now it’s just a general capturing of life for myself. A visual and textual yearbook. I started Invoke the Series because I was interested in capturing people’s stories. I like to see how a camera can imitate the essence of a person, not only by what you see on the screen but also by how you edit it together, what music you might choose, and how you shoot it. I like to think that each episode of Invoke the Series looks different because of the person who’s featured in it.

In your photography on Invoke the Dope and your video work in Invoke the Series, a lot seems to focus around family life. Can you talk a bit about how you’ve been inspired by your family in the artwork that you make?

One of my older brothers, Jumatutu, is a dancer. He’s actually a professor here at Swarthmore, and he runs a dance company in Philadelphia called idiosynCrazy. I feel like all of my siblings have some sort of artistic passion that they follow, no matter what else they’re doing in life. And I just remember, growing up, my parents never saying, “Oh, you can’t do art. You can’t do this, you can’t do that, you have to go into one of these fields.” And I remember Jumatutu entering college—at Swarthmore—with some major like Biochemistry, but graduating with a major in English and going on to get his MFA in Dance. He started his own dance company. And watching that happen, and seeing my parents support him at every turn and every new venture, has really influenced the way I feel about art.

How have you been inspired by your family in terms of subject matter?

I like to photograph people. I like to write about people. I like to videotape people. And I think that that comes partially from growing up in such a large family and always being surrounded by people. And having a camera in front of me gives me a chance to be isolated and sort of step back from the crowd and step back from the madness that’s happening, but still be a part of that madness. One of my brothers got married last spring, and being surrounded by family—that was when I started to realize why I had a camera and why I bothered with what I was doing, even if sometimes (most of the time) I don’t feel like I’m very good at it. It’s because it gives me a chance to show people how I see them, and I think so many people are so amazing, and I don’t think they are told that often enough. And that also comes from my parents, who are very big on the “you can do anything in the world” kind of mindset.

I know, just from knowing you so well, that you talk sometimes about how it’s annoying—

I thought you were pretending you didn’t know me at all? [laughs]

[laughs] Shh. I know that you are annoyed by the way that people of color are portrayed in media. Because they’re always portrayed as people of color—it’s always this charged thing—and I feel like you’re setting out to do something different. Can you explain that a little bit?

Okay, well, my thing is—and this is with people of color, it’s with women in some stuff, it’s with people who identify as queer—with any character who’s not a straight, cisgendered, white male who doesn’t have any economic problems; if there’s a story about anyone who’s not “normal,” the entire movie is about how “not normal” they are. And how that affects them.

Yeah, like Precious! Let’s not even go down that path. So my thing is, I don’t go through my life every day thinking, “How does my blackness, or how does my femininity, or how does my hair affect this person standing next to me who doesn’t look like me?”

I think that every day.

It’s because you’re a redhead. That’s fair. I’m sure you needed support on Kick a Ginger Day. But I think that, growing up and seeing all of these images and all of these things telling you that you are not normal, and telling you that that needs to be talked about all of the time, makes you feel like you’re not normal. So what I want to do in all of my artwork is give people a chance to not have to stand for something other than for who they are inside. And if that means that their story is about growing up and being black in a certain neighborhood, then that’s their story—but it’s not the story of every single black person growing up in a neighborhood.

So, given how you feel about that, what are your long-term plans?

You mean my Big-term Life Goals and Dreams?

Yes, long-term—you don’t need to talk about how you’re going to work at 7-Eleven right after graduation.

Thank you! Don’t want to talk about my Wawa career… which isn’t happening, Mom and Dad. Big-term goals: I want to write a book series about a girl who’s 12 years old, and she’s essentially a superhero.

And it’ll be like Buffy the Vampire Slayer, but it’s set in West Philadelphia, and also she won’t be a blonde cheerleader. And I want to make an HBO series. And it’ll either be about growing up in the Poe family (which is my family) or it’ll be all about a girl, dum-dee-dum-dum-dum, who one day finds out she’s being sent to boarding school. But she’s entering in sophomore year, when everybody else already knows each other. And then it’ll just be those three years of high school: sophomore, junior, senior year. Three seasons long. And if all else fails, I’ll just go to BBC and work for Doctor Who.

Mmhmm. So (returning to your obsession with your family) your younger brother also goes here. Is your family identity becoming tied in with Swarthmore?

[laughs] My mom really likes Swarthmore. Yes. It’s the Quaker values that Swarthmore’s based on that she is so in love with, and that the rest of my family is sort of in love with as well. That’s why my older brother went here. But Swarthmore’s changed a lot since that time. I heard Collection is coming back, and I think that’s really important. There’s just something about the idea of a community that speaks to each other that is like our family. I would say, sort of. Yes, but not really. Yes. I don’t know. I hate interviews.

Can you talk a little bit about your final project for your major?

In broad terms, I’m looking at the relationship between two female characters. I’m asking the question, “Would you still do all that you’re doing with that person if you knew that things were going to end up being terrible?” The format of it is an attempt to sort of draw in all of my artistic interests, and the story will be presented in web format. There will be video footage of this relationship as it’s happening, and photographic evidence, I guess you could say. Memorabilia left over. Remnants of this relationship. I’m excited about it.

And your photography is going to be featured in a magazine pretty soon, right?

Yeah, the magazine is called Mambu Badu. It’s new, and it’s put together by a few really talented women-of-color photographers. They were having a call for entries, and I figured, why not? What’s the worst that could happen? And then about a month later, I got an email saying they wanted to put my stuff in the magazine. Which is really a huge honor, just based on the other people that they chose. It was an honor to see that I was in the same pool as a bunch of great photographers who I’d been stalking on the internet. The photos of mine that are going to be in it are mostly of my nephew and my friends. Just, essentially, invoking the dope.

No big deal. So… are you famous? I heard you’re a Natural Hair Style Icon.

No, absolutely not. I am not famous at all.
Sorry that was so ramble-y.

0 thoughts on “Q&A: Tayarisha Poe ’12 Invokes the Everything”